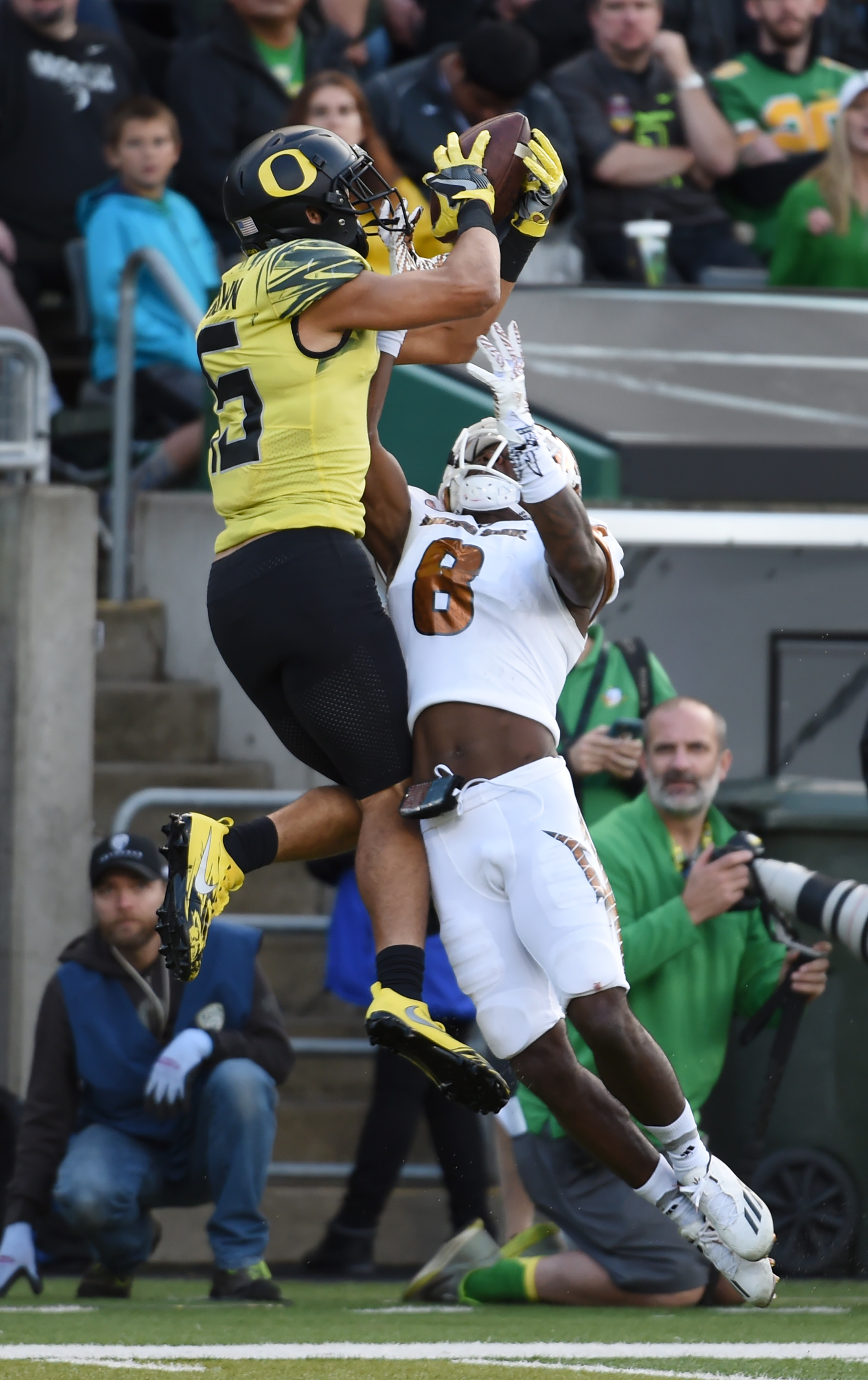 Besting the home boys: Arizona native Jalen Brown grabbed a 49-yard pass from Justin Herbert in the fourth quarter that helped seal Oregon’s 54-35 win over Arizona State. For the game Brown clutched 5 aerials for 97 yards, his best performance as a Duck. (Photo by Steve Dykes/Getty Images)

A win is like a new coat of paint. It makes the most dilapidated house seem more in order and more appealing.

It lifts the gloom, but there’s a goat on the roof: the Ducks face USC, Stanford and Utah in the next three weeks, three teams with the stuff to exploit all their flaws and test their promising new quarterback.

In his third-ever start true freshman Justin Herbert sanded down the injury-riddled Sun Devils, 31-42 passing for 489 yards and four touchdowns, while running 11 times for 56 yards.

He was sacked four times for 33 yards in losses by the blitz-happy visitors, but he burned that blitz for several big plays that made the difference in a 54-35 blowout. Oregon got to blow the foghorn again. The postgame fight song was jubilant. The Duck had a reason to crowd surf.

On the Ducks third play from scrimmage Herbert recognized a blitz and tossed a quick pass to Pharaoh Brown in the left flat. Brown got a key block from wide receiver Darren Carrington, stiff-armed the safety in the face and rumbled 72 yards for the touchdown.

Midway through the first quarter Herbert rolled right away from pressure, scanned the field patiently and connected with a leaping Charles Nelson for a 31-yard score. Nelson left his feet too early but showed great concentration with a defender draped on his shoulder, clutching the ball just in front of the goal posts for a 14-7 lead.

After Kaulana Apelu ended a turnover drought by the defense with his interception just before halftime, Herbert found Brown again for a score and a 30-14 cushion at the break. This time the senior tight end leaked out of the backfield as Herbert faked a running play to Royce Freeman. The fake froze the linebackers and Brown came wide open, the Sheldon grad taking a little off the ball for an easy toss-and-catch that opened up a 3-score lead.

Arizona State got close in the third quarter when the offense stumbled, but two big plays, a spinning 58-yard run by Tony Brooks-James, and a 53-yard connection from Herbert to tight end Johnny Mundt, kept the Ducks in command.

The Oregon defense cashed in with three interceptions, Apelu’s pivotal grab with 34 seconds to go in the half that set the Ducks up inside the 30, then second-half steals by Tyree Robinson and Brendan Schooler. Schooler’s pick was his third of the year, which leads the team.

A struggling, still-recovering Royce Freeman capped the scoring with an 11-yard run with 2:36 to play for the 54-36 final.

Arizona State entered this game reeling from injuries. Six starters sat out the game, and eight players missed practice time this week. The offense has struggled since injuries to their two best quarterbacks, and the secondary has been porous all season.

The wins gives Duck fans a reason to hope, not so much for this season as the close of the schedule is daunting. But the youth movement on the team fosters optimism for the future. Schooler had six tackles Saturday while freshman linebacker Troy Dye had 10. The four fabulous freshmen on the offensive line did a credible job against the ASU pressure, spearheading an attack that rolled up 54 points and 734 yards.

Junior Jimmie Swain took over at inside linebacker due to injuries to A.J. Hotchkins and Johnny Ragin III. He was active and relentless, ranging all over the field for his 13 tackles. Freshmen defensive linemen Gary Baker and Wayne Tei-Kirby made some nice stops inside, and senior defensive end TJ Daniel had a 7-yard sack.

After the game head coach Mark Helfrich said, “When things are rough, you find out a lot about who your real friends are and who sticks by you and that team does, no question. But this is one game. We don’t need to anoint the quarterback. Nobody’s smart again, we’re still all idiots, myself at the top of that list.”

It’s clear from those remarks that the coach has been reading his reviews, but he’s bothered by the wrong thing.

He deserves credit for the fact that he hasn’t lost his team, not this year after opening 2-5 and not last season after a 3-3 start.

But the losing ought to bother HIM enough that he doesn’t have time to make uncomfortable little jokes about it. A team that has the profile and infrastructure Oregon does should look prepared and be smart, executing with purpose in close games.

Credit Helfrich also, along with quarterback coach David Yost, for identifying Herbert’s remarkable promise, bringing him along so steadily after the team reached a crisis point.

It took courage to start him against Washington, and in his first three games starting the calm, quiet, eerily humble freshman has tied two Oregon records, Bill Musgrave’s 489 yards passing in a single game, Marcus Mariota’s 10 touchdowns over two games.

Those are two of the most hallowed names in Webfoot football history. To equal their achievements in his first three starts just two and a half months after stepping on the practice field for the first time is stunning. Pharaoh Brown is right. Justin Herbert is borderline amazing.

If the gunslinger from Sheldon engineers two or three more wins to sneak the Ducks into a minor bowl game, setting up a conference title run next season, it may indeed be time to annoint him.

He looks like a difference-making quarterback, the kind a coach can build a team around. It’s still an open question who that coach should be.