PSU Dominates in Second Half, Rolls to Victory 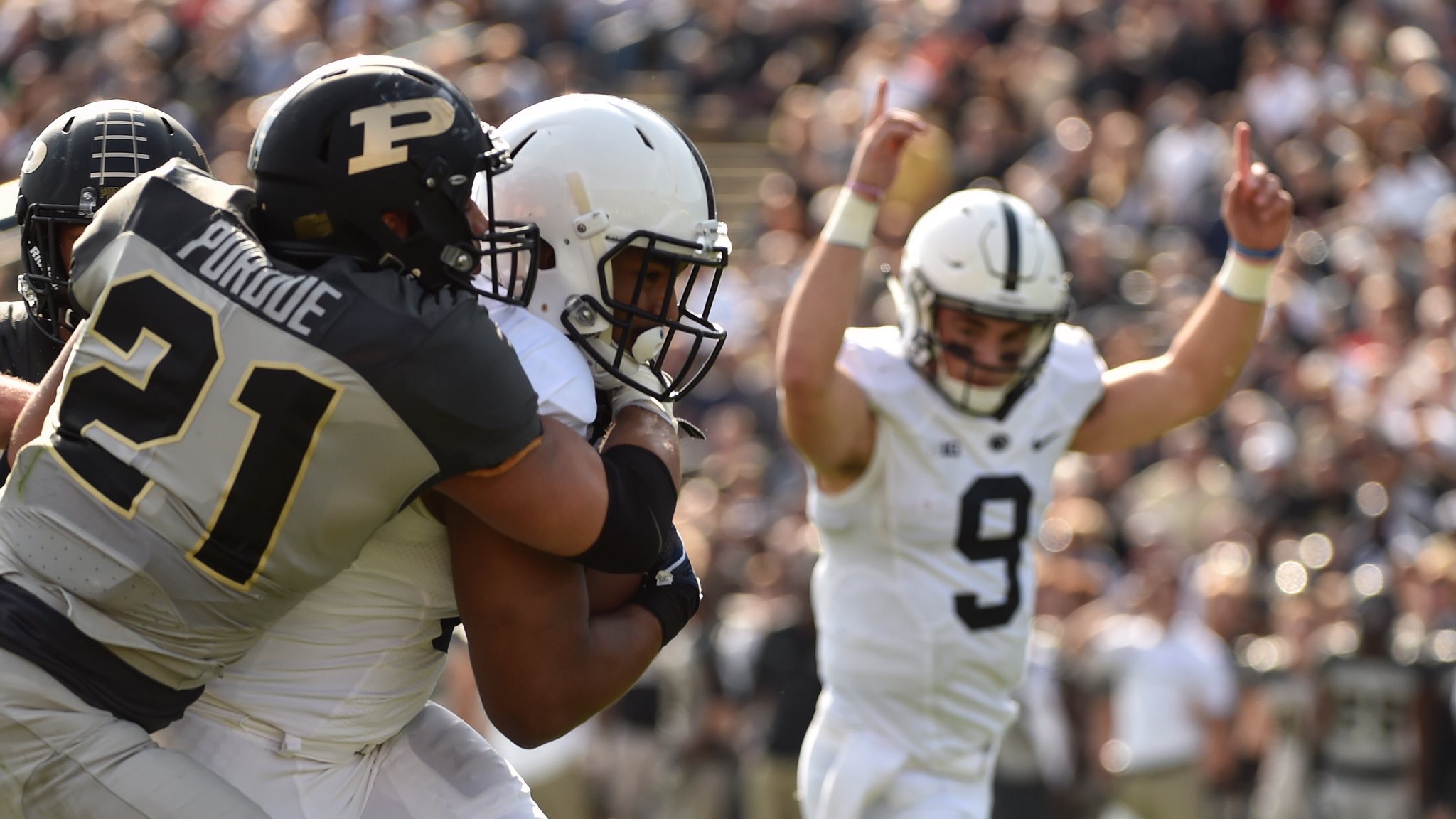 PSU Dominates in Second Half, Rolls to Victory

We wondered  whether Penn State would be able to get over their big win last week, they didn’t, in the first half at least.

The Nittany Lions headed to Purdue looking for their sixth win, but it wouldn’t be easy, at least at first.

The Nittany Lions started with the ball and Barkley quickly got going with an 11 yard run and then catches of 12 and 37 yards respectively, Barkley then punched it from three yards out to make it 7-0. David Blough  and Purdue answered with a 10 play 77 yard drive, that was helped out by a handful of Penn State penalties. Markell Jones punched it in from a yard out to make to tie it. After a poor PSU drive, Purdue converted two third downs and a big fourth down before Blough hit Cameron Posey for a one yard score, 14-7, panic time? Not so fast, McSorley answered hitting a wide open Chris Godwin who walked in from 38 yards out. The teams traded field goals before half to make ot 17 all, Penn State seemed lucky to be in this situation.

Purdue received the ball to start the second half and on 3rd and three, back up linebacker Brandon Smith picked off Blough and returned it to the Purdue 24. Barkley went for back to back nine yard runs, then a six yard run, then McSorley threw a strike to Godwin for the score, 24-17 PSU. The teams traded punts, but Purdue muffed the Penn State punt giving the Nittany Lions the ball on the 24.  Barkley broke a 20 yard run and then Andre Robinson smashed it up the middle for the score, 31-17. After another Purdue punt, McSorley hit Blacknall for 42 yards,but the drive stalled deep in Purdue territory so the team settled for a 29 yard field goal, 34-17. David Blough would not go away quietly as he hit his favorite target DeAngelo Yancey for 62 yards to the house to close the gap to 34-24, it was a pretty sweet throw. The Boilermakers kicked onsides, but it went out of bounds. Barkley broke a 22 yard run and two plays later McSorley found a wide open Miles Sanders who took it 21 yards for the score, 41-24. The defense really stepped up in the second half forcing another Purdue Punt. It didn’t take long for the Nittany Lions to get the knock out punch as Barkley bounced outside, made a man miss, and took it 81 yards to the house, 48-24 at this point.  the turnover prone Blough fumbled on Purdue’s next drive and Tommy Stevesn took over at QB for PSU. Stevens broke a 18 yard run, then hit Irvin Charles for 26. Mark Allen took it up the middle from a yard out, 55-24. A Chris Campbell pick of Purdue’s back up sealed the deal, but Andre Robinson wanted another touchdown so he took it 19 yards to make it 62-24 and that would do it.

Well, Penn State did come out a little flat to start, especially the defense who looked very poor in thefirst half. Blough bullied the Lions’ secondary early on, the Purdue offense seemed unstoppable. Coordinator Brent Pry made great adjustments and only allowed 7 points in the second half, and got four turnovers. Penalties killed this unit, they’ll need to correct that on Monday. The run defense was stellar although Purdue had no interest running the ball.

As for the offense, all I can say is wow. Barkley did have a career day with 207 rushing yards and 277 total yards, the most by a PSU player since Larry Johnson in ’02. The dominant performance in the second half wasvery impressive and showed a lot about the future of the team. I would like to see the team run with Barkley more on first and second and stop taking shots which leaves them in third and long. The other running backs looked very good today, Robinson is a great goal line back that will come in handy for years to come. The 62 points scored was the most by the Nittany Lions since 2009, it’s even more impressive when you realize that deep ball threat DeAndre Thompkins was inactive and tight end Mike Gesicki got hurt early on.

Penn State has been a second half team all year, and they showed that again yesterday, in a big way, outscoring the Boilermakers 45-7 in the second half. The penalty problem needs to be corrected, but if the offense keeps up this pace, no one will stop them. Trace needs to get a little more accurate with his passes, but that will come with experience. It was nice to see the young team rally again, especially after all the distractions they faced this past week.

The most important part of this win though, is that the Nittany Lions got win number six, which means they are going bowling for the third straight year.

This was a big win, and the Nittany Lions will return home for a big matchup.

Up next: vs Iowa