QBs who are rising and falling after Week 8 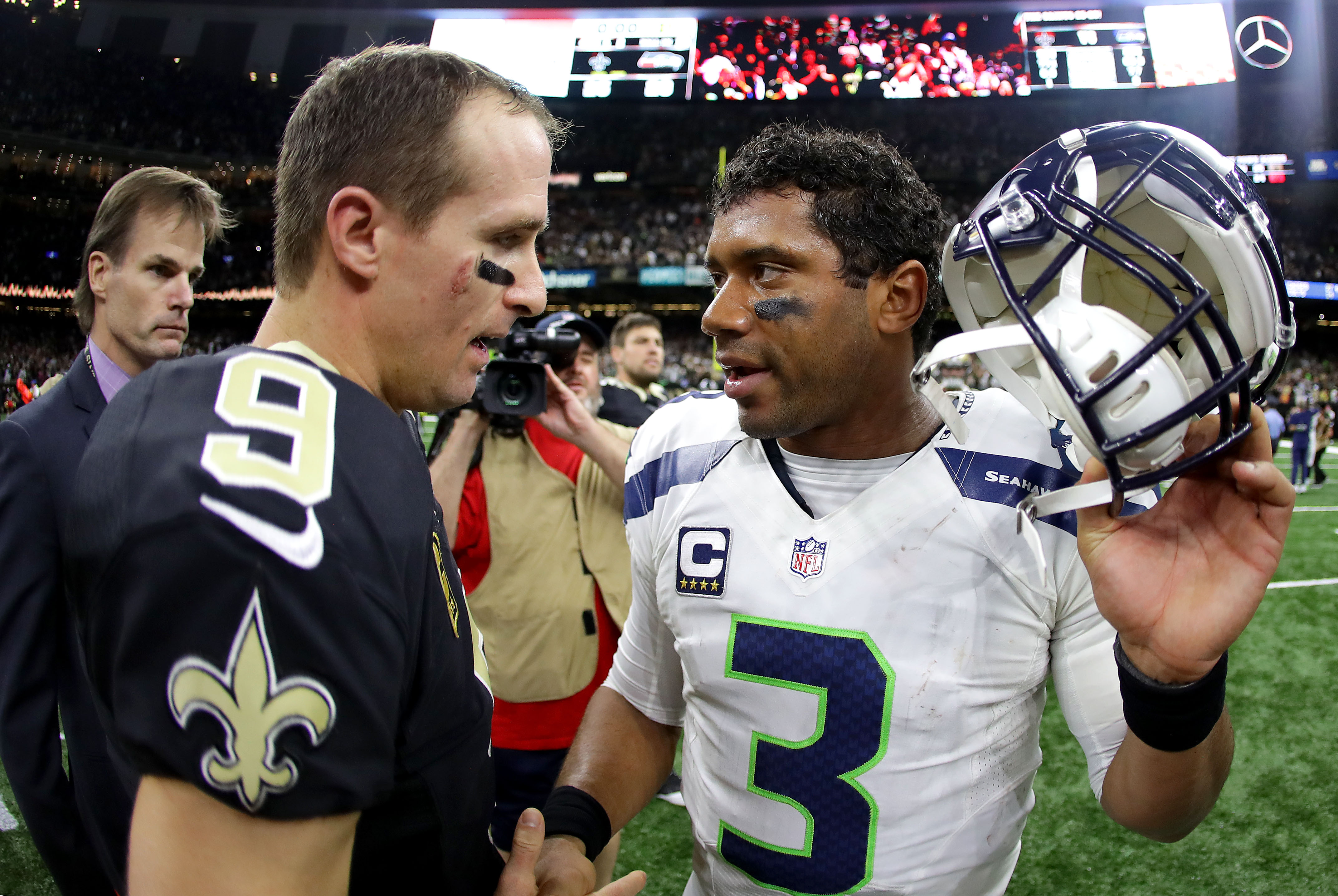 QBs who are rising and falling after Week 8

Home cooking didn’t sit well in the stomachs of some quarterbacks in Week 8 of the NFL season.

There’s one exception this week involving a quarterback who almost always can be included in the “rising” group when he plays at home.

It probably should just be assumed that Tom Brady is a rising quarterback, but a few factors set Brady’s Week 8 passing clinic apart from others.

Brady threw four touchdown passes for the first time this season, completing 22 of 33 passes for 315 yards with no interceptions in the Patriots’ 41-25 win at Buffalo.

It’s not like Brady had enough time to tie his shoes on every dropback. He was sacked four times and ESPN.com credited the Bills with nine quarterback hits.

Brady converted the Patriots’ first five third-down attempts and overcame the Bills’ formidable pass rush against a coach who probably had this game circled on his calendar as soon as the schedule came out in April. This game meant so much to the Bills (4-4) that it wouldn’t be surprising if they lost at Miami last week because they were looking ahead.

.@Patriots Tom Brady has 4 pass TD vs the Bills in less than 3 quarters

This is the second straight year that Brady has started the season with a chip on his shoulder. After he seemingly beat Deflategate last year, he threw 11 touchdowns with no interceptions in his first four games. After serving his four-game Deflategate suspension this year, Brady has thrown 12 touchdown passes with no picks in his first four games and the Patriots (7-1) avenged their only loss this season.

Blake Bortles showed on Thursday night that he’s right up there with Peyton Manning, Tom Brady and Dan Marino.

Manning, Brady and Marino are the top three all-time in the fourth-quarter comeback department. But that’s in real football. Bortles might have engineered one of the most dramatic comebacks in fantasy football history by throwing two touchdown passes in the final 3:11 at Tennessee, but in real life he regressed enough to get his offensive coordinator fired.

Jaguars quarterbacks coach Nathaniel Hackett somehow earned a promotion to offensive coordinator after Greg Olson was fired in the wake of Jacksonville’s 36-22 loss. Perhaps Jaguars head coach Gus Bradley also looked only at Bortles’ final stat line. He completed 33 of 54 passes for 337 yards with three touchdowns and no interceptions. But all three of those TD passes came after the Jags fell behind 27-0 at halftime. Bortles completed just 8 of 16 in the first half for 64 yards.

Those fourth-quarter touchdowns won’t mean anything until Bortles plays better in the first quarter.

Not even the Seahawks can shut down Drew Brees in the Superdome.

Brees didn’t exactly have a monster game, but he performed well enough to lead the Saints to a 25-20 win over the Seahawks and their sixth-ranked defense. Taking advantage of the absence of Kam Chancellor and Michael Bennett, Brees completed 27 of 35 passes for 265 yards and a touchdown with no interceptions. It was his first game without an interception since Week 2.

The Saints (3-4) overcame a 14-3 deficit in the second quarter. Brees got them to within 14-13 when he scored his first rushing touchdown of the season on a one-yard plunge with 49 seconds left in the first half.

Brees threw a two-yard touchdown pass to Brandin Cooks to give the Saints their first lead, making the score 22-17 with 12:24 left in the game. It was the 58th straight game that Brees has thrown a touchdown pass at home, extending his own record.

The Seahawks (4-2-1) countered with a field goal, but the Saints answered with a 41-yard field goal by Wil Lutz. Brees got the Saints into field-goal range with a 20-yard pass to Cooks on third-and-5 from the Seattle 44. That field goal turned out to be huge because the Seahawks reached the Saints’ 10 on their final drive.

The Saints had some trouble in the red zone, scoring touchdowns on just two of five trips. But they converted nine of their 15 third-down conversions and Brees has the Saints in the thick of the NFC South race.

Russell Wilson hasn’t been himself this season because he’s been so banged up.

He failed to throw a touchdown pass Sunday against the league’s 27th-ranked passing defense, and the Seahawks fell 25-20 at New Orleans.

Wilson has gone three straight games without a touchdown pass, and on Sunday he was intercepted for the second time this season. Nathan Stupar’s pick in the second quarter was the Saints’ third interception this season. New Orleans (3-4) came into the game tied for last in the league in that category.

The Seahawks (4-2-1) led the Saints 14-6 when Stupar made that interception, and it set up Drew Brees’ touchdown on a 1-yard keeper before halftime.

Wilson completed 22 of 34 passes for 253 yards. The Saints would have won the game a lot more easily if it weren’t for a 34-yard touchdown on a fumble recovery by Earl Thomas and Tanner McEvoy’s 43-yard pass on a gadget play that set up Christine Michael’s 2-yard TD run.

The game wasn’t decided until the final play, when Wilson hit Jermaine Kearse in the end zone from 10 yards out. Kearse couldn’t land inbounds, and the Seahawks followed last week’s ugly tie with a loss.

Most NFL fans who aren’t old enough to have graduated college don’t remember when the silver and black was a thing in the NFL.

Derek Carr is helping to change that.

Carr threw for a franchise-record 513 yards Sunday in the Raiders’ 30-24 overtime win at Tampa Bay. He threw a 41-yard touchdown pass to Seth Roberts to win it with 1:45 left in overtime. It was Carr’s fourth TD pass of the day. His 513 yards might be a little inflated because he had 13 extra minutes, but he threw the ball 59 times, completing 40 of them, without an interception.

The Raiders (6-2) are tied for the second-best record in the AFC and are 5-0 on the road for the first time since 1977, according to NFL.com. Those were the days of John Madden and Ken Stabler.

Carr responded by driving the Raiders 75 yards on nine plays, with a Tampa Bay penalty keeping the drive alive on fourth down, and throwing a game-tying, 7-yard touchdown pass to tight end Mychal Rivera with 1:38 left in regulation. Rivera came into the game with just three receptions.

Oh, and Carr’s performance was enough to help the Raiders overcome an NFL-record 23 penalties.

Jameis Winston’s roller-coaster ride continues in his sophomore season, and he experienced both ups and downs in Sunday’s 30-24 overtime home loss to the Raiders.

Winston completed 8 of his first 10 passes for 89 yards and a touchdown as the Buccaneers (3-4) jumped out to a 10-0 lead in the second quarter. He cooled off after that, however, and ended up completing just 16 of 32 passes for 180 yards and two touchdowns against the league’s 30th-ranked passing defense in terms of yards per attempt (8.1).

Winston led the Bucs on a nine-play, 82-yard drive that ended with Jacquizz Rodgers’ 1-yard touchdown run and gave them a 24-17 lead with 3:48 remaining. But Winston ultimately was out-dueled by Derek Carr and the Bucs are still looking for their first home win.

The Buccaneers had won two in a row and could have had second place in the NFC South all to themselves, but now they’re a game and a half behind the Falcons.