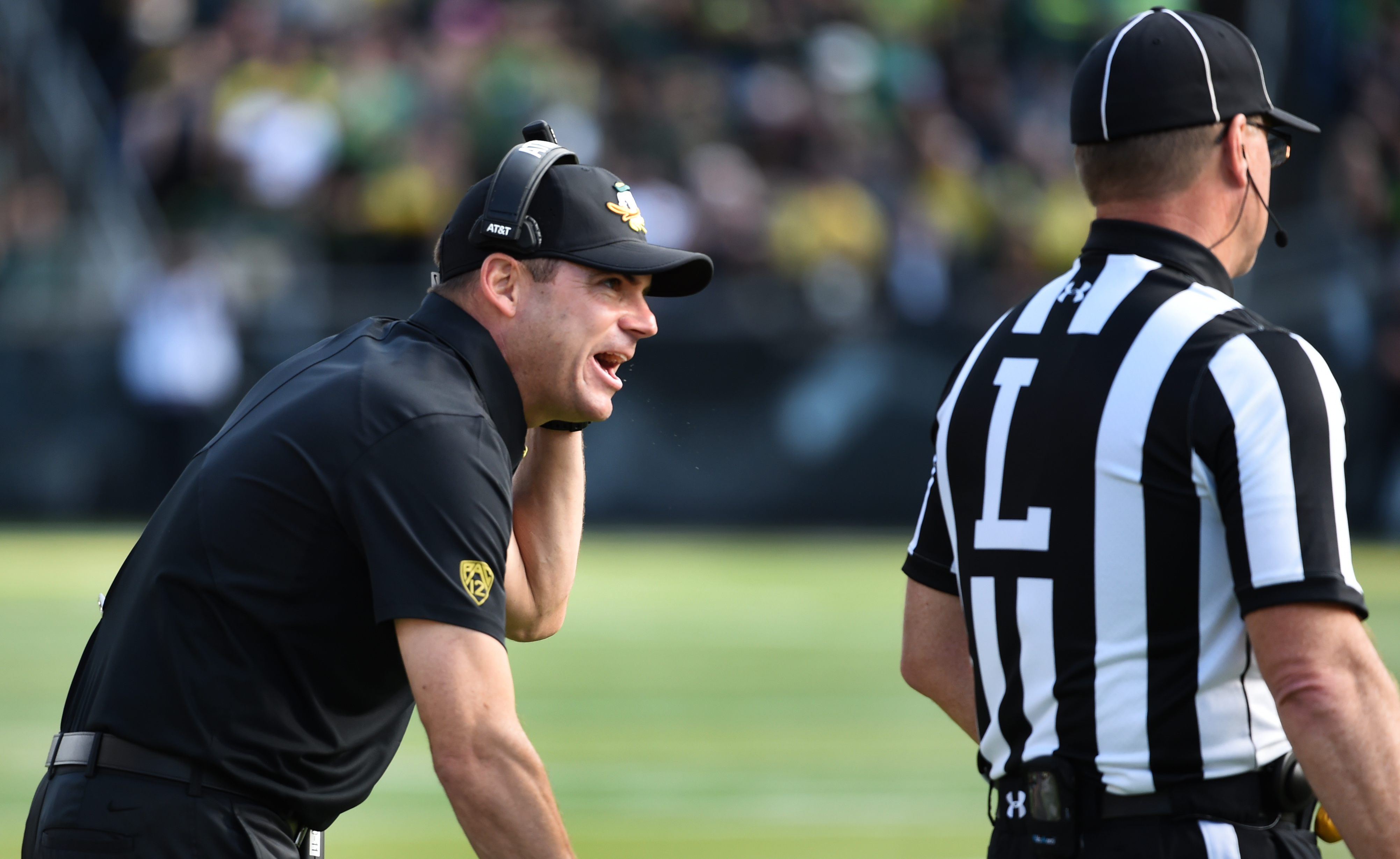 Crew chief with three flat tires: Mark Helfrich has been urgent, pleading, and resourceful, but the Ducks are five to six talented players short of being a conference competitor this season. (Photo by Steve Dykes/Getty Images)

Getting their first conference win in five tries was nice, but this Oregon season could still go deeper into the woods.

The Ducks have four games remaining, three of those on the road.

Saturday’s matchup with USC is symptomatic of their decline under Mark Helfrich.

These were all elite Southern California athletes the Oregon coaching staff tried to pry out of that sunny, fertile recruiting ground, and they failed on every one of them.

Chip Kelly, Eric Chinander and Nick Aliotti used to win a few of these crucial prospect battles. Notably, they plucked De’Anthony Thomas and Arik Armstead out of California, both 5-star players.

Oregon recruiting has declined every year under Helfrich, and the Ducks are making fewer inroads into The Golden State.

Players like Michael Clay, Derrick Malone, Erick Dargan, Terrance Mitchell and John Boyett used to be the backbone of an aggressive, opportunistic defense.

The current Oregon D features two freshmen from Cali, Troy Dye and Brendan Schooler, but both of these were underrated steals rather than blue chips. Clay Helton and his staff didn’t have room for them.

One of the best arguments for keeping the current coaching staff intact, particularly defensive coordinator Brady Hoke, is that Hoke has put together a really good defensive recruiting class so far.

Yesterday he added 3-star athlete Nick Pickett, and over the weekend he extended a scholarship offer to his teammate at Salesian High School, outside linebacker Rahyme Johnson.

Athletic talents like Deommodore Lenore, Sampson Niu and Jaylon Reed are already committed. Langi Tuifua could blossom into the quick, tenacious outside rusher Oregon needs, and big Tennessee defensive tackle Rutger Reitmaier has the motor and intensity to shore up the middle of the line, where Oregon has been vulnerable this year.

Talent matters so much. If Oregon is going to arrest the decline in its football fortunes, they have to win more recruiting battles.

The next three weeks, clashes with USC, Stanford and Utah, will show how critical recruiting success is to on-field success. The Ducks will be underdogs in all three games, and will have to accelerate their apparent improvement to avoid going 0-3.

Justin Herbert, Dye and Schooler are nice pieces, but these Ducks are about 5-6 short of a full puzzle. It’s painful to realize they’re very likely to miss a bowl this year.

Here’s another jagged little pill. Oregon State’s Ryan Nall is back in the lineup, and Saturday he carried the ball 19 times for 174 yards. The Beavs host the Civil War this year. A month from now, a little more beaten up after three physical games, the Ducks could be very vulnerable in Corvallis.

Already this season the Webfoots have lost long winning streaks over Colorado, Cal, and Washington.

The Ducks need a 3-1 finish to be guaranteed a bowl game, or win at least two more to back in to one. That task looks daunting right now, unless Herbert continues to confound defenses in a record-setting way.

Herbert is a cool hand in the pocket, but the ironic clean-handed truth is that his best efforts are likely to be good enough to keep Oregon hanging around in games they don’t have a good chance to win. Trojan tailback Ronald Jones ran for 223 yards against Cal. The Ducks don’t have anyone who can cover Smith-Schuster.

Stanford seems to have found some offense with Keller Chryst at quarterback, and their physical style has always given the Ducks trouble.

Utah’s Joe Williams is another bruising runner who should have a career day exploiting the soft Oregon middle, while the Utes pressure defense will test Herbert much more effectively than the beat-up ASU or notoriously poor Cal did.

He’s borderline amazing, but Duck fans just can’t expect a true freshman to have record-setting days every time out.

There’s a learning curve that shapes our ends, and a rough-hewn reckoning.  To achieve more than a 4-8 finish, Mark Helfrich has to get a young, undermanned, injury-riddled team to progress at a rate logic doesn’t anticipate.

Three wins won’t do it, not this year or any other.