The View from Beyond The Shoe: Haunting games of the past 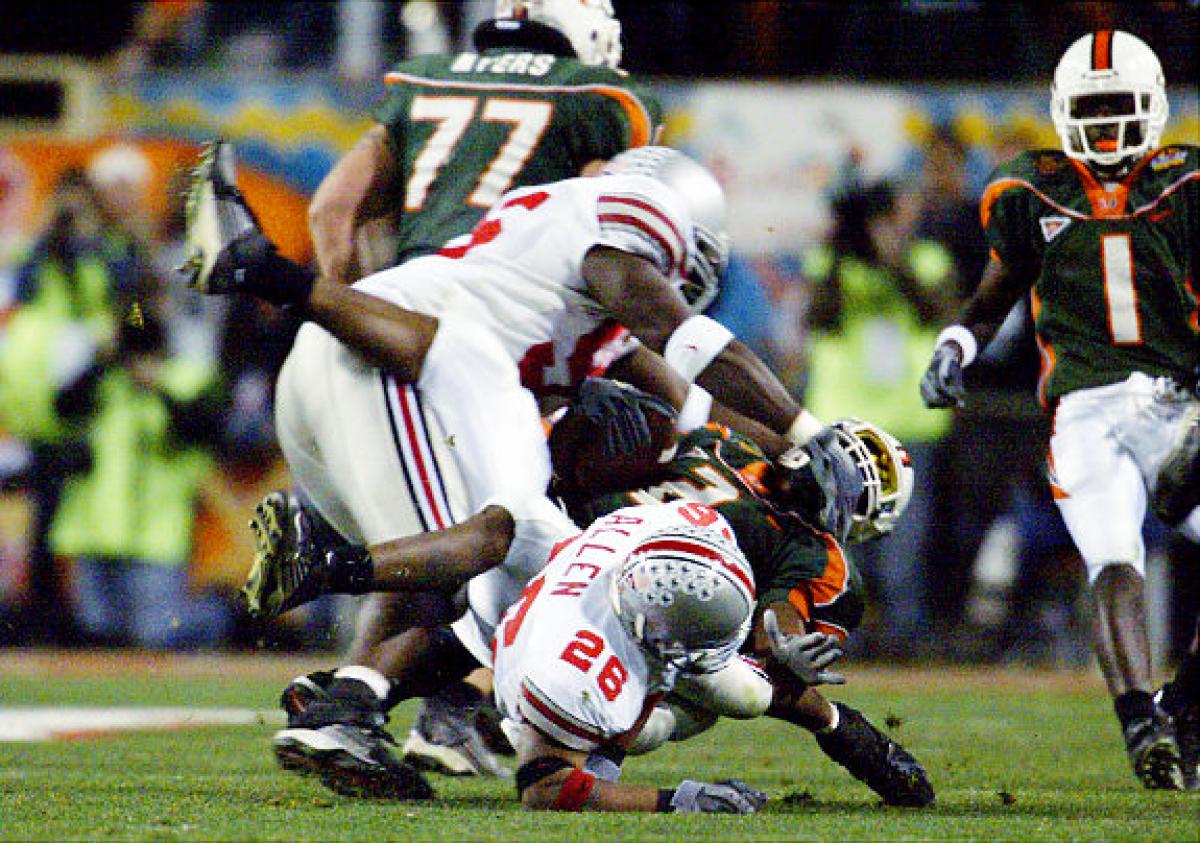 The View from Beyond The Shoe: Haunting games of the past

Halloween. A day that started as All Hollow’s Eve, the day before All Saints Day. A day that has morphed into some strange concoction of dressing up and getting candy, getting drunk while wearing a “sexy” Urban Meyer costume (not as hot as we would hope), and a day to prank the neighbors. But to many of us, Halloween also is a time for scary movies and stories.

It’s the one time of year you can watch a horror movie and people don’t look at you like you belong in the insane asylum. It’s also a great day to look back at the scariest stories you know or have ever heard.

My scariest story took place nowhere around the end of October. Sure, we have all had our fair share of terrifying moments around October 31st. How many mid October to mid-November Saturdays have been spent living and eventually dying thanks to the Men from Columbus? It doesn’t take a long stroll through the Ohio State history books to look at seasons that have been blown up in that month or so time frame.

We all remember (those of us old enough to) the loss to Michigan State on November 7th, 1998. A loss that derailed a championship season. We all remember the Penn State game from two weeks ago, as people were getting into the Halloween spirit. While this recent loss may very well play out as an afterthought when this season is done, it’s hard to miss the connection.

But I want you, the fan, to think back over your how-ever many years and think about what was the single scariest moment you’ve ever faced as a Buckeye.

Was it an upcoming game with Michigan, during the Cooper era, where you just knew in your heart of hearts that we would come up short and ruin another great season? Was it a show down with Penn State (who always seems to be right around Halloween for us)? Was it the thought of facing the then Urban Meyer lead Gators in a National Championship game? There have been more than enough moments to make us Buckeye fans step back and be nervous. When you have been as lucky, dare I say spoiled, as we have been, the nerves and anxiety are there when a tough challenge comes along.

For me, it was not an upcoming game, but a specific time during a very specific game. It’s one I will never forget, as I am sure many of you have similar moments.

The date was January 3rd, 2003. The Buckeyes, of course, were about to take on the mighty Miami Hurricanes in the Fiesta Bowl, playing for a National Championship. It was the ultimate David vs Goliath, the Underdog vs the Unanimous Pick to Win, the game that didn’t even need to be played. That was, of course, except it did need to be played.

Was I nervous going into that game, as a fan? Not nearly as nervous as I am now for big Buckeye games. Was I excited and wanting to see what this team of destiny could do? Extremely. Our Buckeyes were playing with house money at that point. Remember, there were people who thought Iowa was the better B1G team that year. We had Holy Buckeye on our side. I was pumped.

Then, the game started. And my nerves kind of went away. I was just a college kid at the time. I had just ended my terrible D3 playing career (well, my tore up shoulder and torn hamstring ended it for me), but I had a feeling that keeping the game close would be good for us.

Which brings me back, to bring this story full circle. Late in the 2nd quarter, Miami had the ball. As had been happening all game, Willis McGahee was destroying the Buckeyes’ amazing defense. It was then, in a moment of anger, fandom, and genuinely being pissed, I screamed at the top of my lungs “Someone break his F*%#ing leg!”

My friends watching the game with me just laughed. It had happened many times before, where someone would yell or say something that they may not have actually been meaning, but you say it out of frustration. That’s what I had did. I wished for someone to break the leg of a kid who, besides having so much more football talent than I did, was my age.

And then? Well, then Will Allen happened. Everyone remembers this from that game. You may know of the strip/fumble recovery. You remember the rightfully called pass interference. But you remember this:

And the living room at my friend’s house was dead silent. Nobody said anything. Even a couple of our female/non-football fans there that night, not a peep. Everyone in the room just looked at me. I was told later I looked like a man who had seen a ghost. I was legitimately scared. I had wished for an injury on that kid, and it happened. And while I know it had nothing to do with the actual injury, I still think about it.

It’s the same thoughts I had when I laughed at the VaTech quarterback Michael Brewer a few years ago, with his comment about it taking more or better hits than he had taken already to knock him down.

Now, back to today. What is the single scariest thing you have experienced as a fan?

What has scared you the most in Ohio State sports? Was it a similar thought? Was it the upcoming game’s opponent? Was it Tressel getting let go? Let’s take a moment now and celebrate today being All Saints Day (no, not related to Michael Thomas and Vonn Bell), exercise the demons of your Buckeye past, and get ready to get National Championship number NINE!