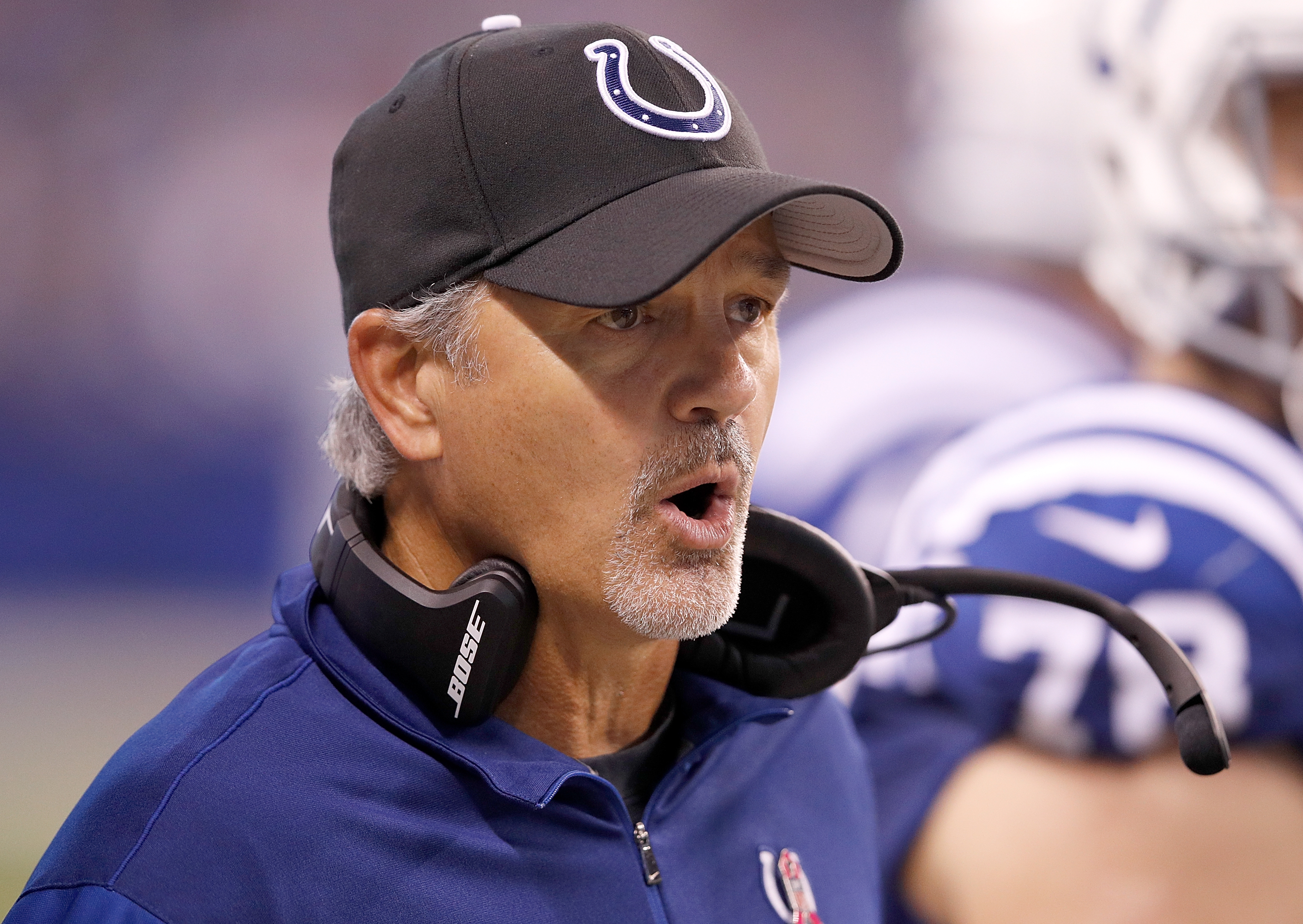 Time for the mid-week check in with the Colts. Lambeau field and the Packers are on the horizon and the Colts are coming off one of their most disheartening losses of the seaon, let’s see how Chuck Pagano and his team want to right the ship—again. (Side note: the fact that “one of” has to be added in front of “disheartening losses” this season is just agonizing.)

Chuck Pagano is not Bill Belichick. When Pagano’s team struggles, the expectation is not that it’s just a little hiccup and they’ll bounce back like it is with Belichick. It hurts to say as someone who follows the Colts, but Belichick has earned the right to be surly with the media. Pagano has not.

So, when Pagano is asked the reasonable question “What’s up with Anthony Castonzo?”, he has not earned the right to an “Our focus is on Green Bay and Green Bay only” response.

If you’re incapable of self-evaluation, you don’t need to be a head coach in this league. The follow up to that question was rightfully “But he’s your left tackle” to which a “So he’s focusing on this game” response was given.

This team can’t manage to remedy their own internal issues. Not just Castonzo, but the entire team. This team has a coach that refuses to address concerns over a supposed cornerstone of the offense struggling while simultaneously saying week in and week out that they apparently “know” what’s wrong and are working to fix it. It’s a massive issue when the results on the field are what they have been.

Pagano has been short with the media before, but this is another level for him. He offered nothing of note.

Chester Rogers is expected back, so he’ll be the punt returner. Dorsett, thankfully, looks like he’ll be good to go. TY Hilton had a rest day as he works to nurse a hamstring injury. Jack Mewhort missed practice (he had a setback last week) and Vontae Davis and Joe Reitz are in concussion protocol.

He did acknowledge that the Packers excel in short passes and catch-and-run plays which the Colts have struggled with in the past. Some injuries to the backfield in Green Bay may ease a bit of the pressure. However, as Pagano says, “Big plays come from the pocket, but when he (Aaron Rodgers) extends plays he can throw it 50, 60, 70 yards on a frozen rope.”

I’ll leave you with this, just the final two questions to end Pagano’s Wednesday press conference. You can decide for yourself if this sounds like a coach who actually knows how to fix this team.

Q: Your offensive line as a whole, what did you attribute those struggles to this past week?

Q: In light of the fact that they didn’t play that well, what do they need to do this week?

Chuck Pagano: Staring at a light switch in the ‘off’ position and telling it to turn on—his hands firmly in his pockets.

Thankfully the Colts players, despite their tendency to use Pagano’s tired Paganoisms (they just love chopping wood), are more willing to engage with the media than their frustrated leader.

Castonzo, when confronted about his unit’s struggles, admitted that technique is where remedies begin: “It it’s a one-on-one block and somebody bets beat, I think with any position in the NFL it comes down to fundamentals and technique. That’s the base of the game.”

He went on to say that consistency in those fundamentals and a trust that they can be relied on “play in and play out” is the difference between them just being good players and players who are playing good football.

Andrew Luck also mentioned basics such as early down execution will lead to more overall success for the unit. “It’s all about practice and keeping it simple. We’re doing something wrong multiple times, going back to the fundamental of it and getting it fixed.”

As usual, Luck was also willingly shouldered the blame for the offenses rough outing against Kansas City.

“Simple issues,” Luck said of his unit’s troubles, “I don’t think I played very well. I think the overall sentiment amongst everybody on the offense was that they didn’t play well, I didn’t play well, that we didn’t hold up our end of the bargain as a teammate.”

Luck also admitted that it’s not easy to stay calm or not get frustrated. But he made sure to praise Pagano for doing a great job “channeling our energy in a positive way to fixing things”—whatever that means.

Actually, I get what it means, it just doesn’t seem to be working. Zen master that Pagano is, it isn’t translating to wins, just positive attitudes about losses.

-Erik Walden on returning to face his old team: “It has been four years so I’m not going to say odd but it will definitely be different. I am just looking forward to it.”

Walden also said that the defense would have their hands full with “one of the best in the business” in Rodgers. More attention has been paid to a struggling offense so far this week, but that’s because everyone knows a superhuman performance from Luck and his unit is the only shot this team has against Rodgers’ Packers.

It’s been said before, but Luck is a very smart man.