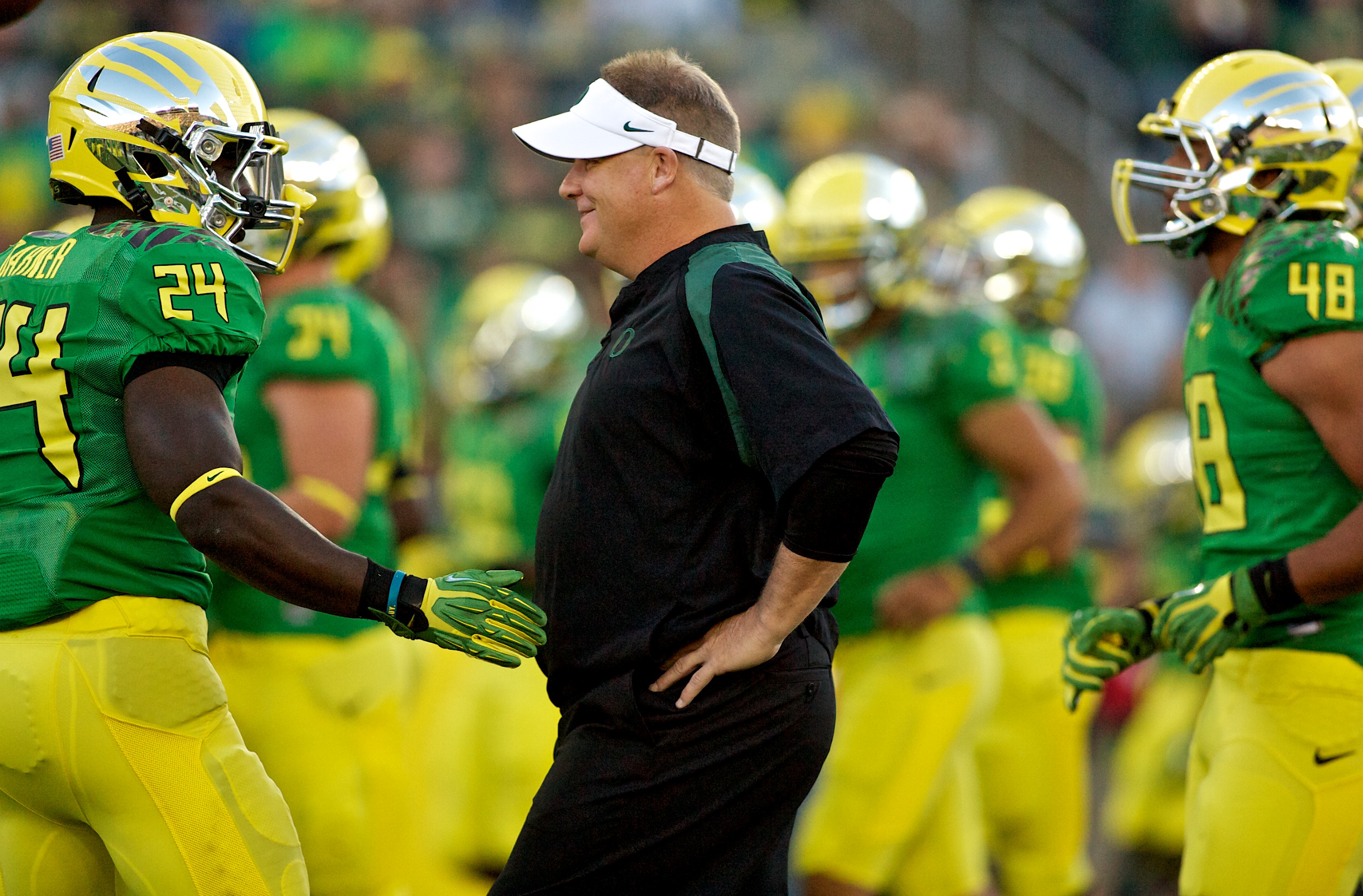 Chip Kelly’s Oregon teams had style and swagger, and they played with energy, discipline and purpose. (Photo by Craig Mitchelldyer/Getty Images)

Chip Kelly keeps fueling the rumors, but ask him about it directly, and he gets as evasive as a politician being investigated by the FBI.

Two weeks ago Phil Knight was his invited guest on the sideline as the 49ers lost 34-17 at Levi Stadium to Jameis Winston and the Buccaneers, a loss that dropped a woeful and dispirited team to 1-6. Political activist/quarterback Colin Kaepernick was 16-34 passing for 143 yards, one touchdown, one interception.

The once-proud Niners are dead last in the NFC and one of the league’s worst teams defensively. Kelly’s offense shredded the PAC-12 (two conference championships and three straight BCS bowls) but it’s been  a smoldering garbage truck fire on Sundays, averaging just 22.6 a points a game this year.

Kelly’s team had a bye last week before their November 6th game with New Orleans, and he spent part of it hanging out with two of his old coaches, Scott Frost and Erik Chinander at the University of Central Florida.

Pro football hasn’t agreed with The Visor. He thrived in college where he could create a culture and innovate at will, pushing the tempo and the envelope with abandon.

At Oregon he took a team with above average talent (recruiting classes in the 20s) and made them a juggernaut. The kids embraced his philosophy and mimicked his swagger.

In the pros, cynical, highly-paid veterans are too busy listening to their entourages and agents. They’ve largely tuned him out.

NFL defenses overmatch his patented schemes, and his players don’t bring the energy and enthusiasm that made his Oregon squads so special.

The quick-quipping ball coach from New Hampshire belongs in college football, and if he comes back to the game that made his legend as Nick Saban and Bobby Petrino have before him, he belongs with the Oregon Ducks.

Kelly gave his Oregon teams attitude and confidence. Their quick-strike, pedal-to-the-metal approach was a perfect fit with the Nike merchandising philosophy and the Oregon brand.

Ticket sales have sagged this season, and the record has declined steadily under Mark Helfrich. The team is hesitant and anxious, floundering in close games. They’ve taken on the personality of the coach, and this time it’s not a good thing.

Duck football is no longer special. Earlier this year Washington quarterback Jake Browning came to the sideline after keeping for a touchdown in the first quarter in a 70-21 blowout and said, “They’ve got nothing. They don’t even care.”

After the game key Oregon players were calling teammates out for a lack of effort and investment.

Type “Chip Kelly back to college” into your Google search box, and you get a full page of results.

On Saturday, the Ducks are going to get blown out by USC. It will be an ugly one-sided game with a clear talent gap on the field. The Ducks will look defenseless and overmatched.

In Kelly’s last year at Oregon in 2012, the Ducks rolled the Trojans in The Coliseum with redshirt freshman Marcus Mariota at the controls, 62-51. Kenjon Barner dashed for 312 yards as the Webfoots raced to 730 yards of offense. A last-minute touchdown made it look slightly closer but the visitors dominated.

Four years later Oregon football is 2-5 and looking at a beatdown on the road in Southern California. It’s listless and tired with a million things that never quite get cleaned up.

When Kelly ran the program, everyone knew who was in charge, what the plan was. It was a team committed to excellence. People were excited.

The little guy was a commanding presence. His teams had style and made the most of their weapons.

Kelly is a winner with charisma, and Knight and the Ducks should pay whatever it takes to get him back on the home sideline at Autzen Stadium.

The energy and intensity has steadily declined without him.

He’ll be offered other jobs, and the Ducks will have other options including retaining Helfrich, but there’s not a better fit in the college game than Chip Kelly and Oregon. He belongs here, and the Ducks need him desperately.

Let them get to work bringing the edge and attitude back to the Ducks. Kelly would make them relevant again.