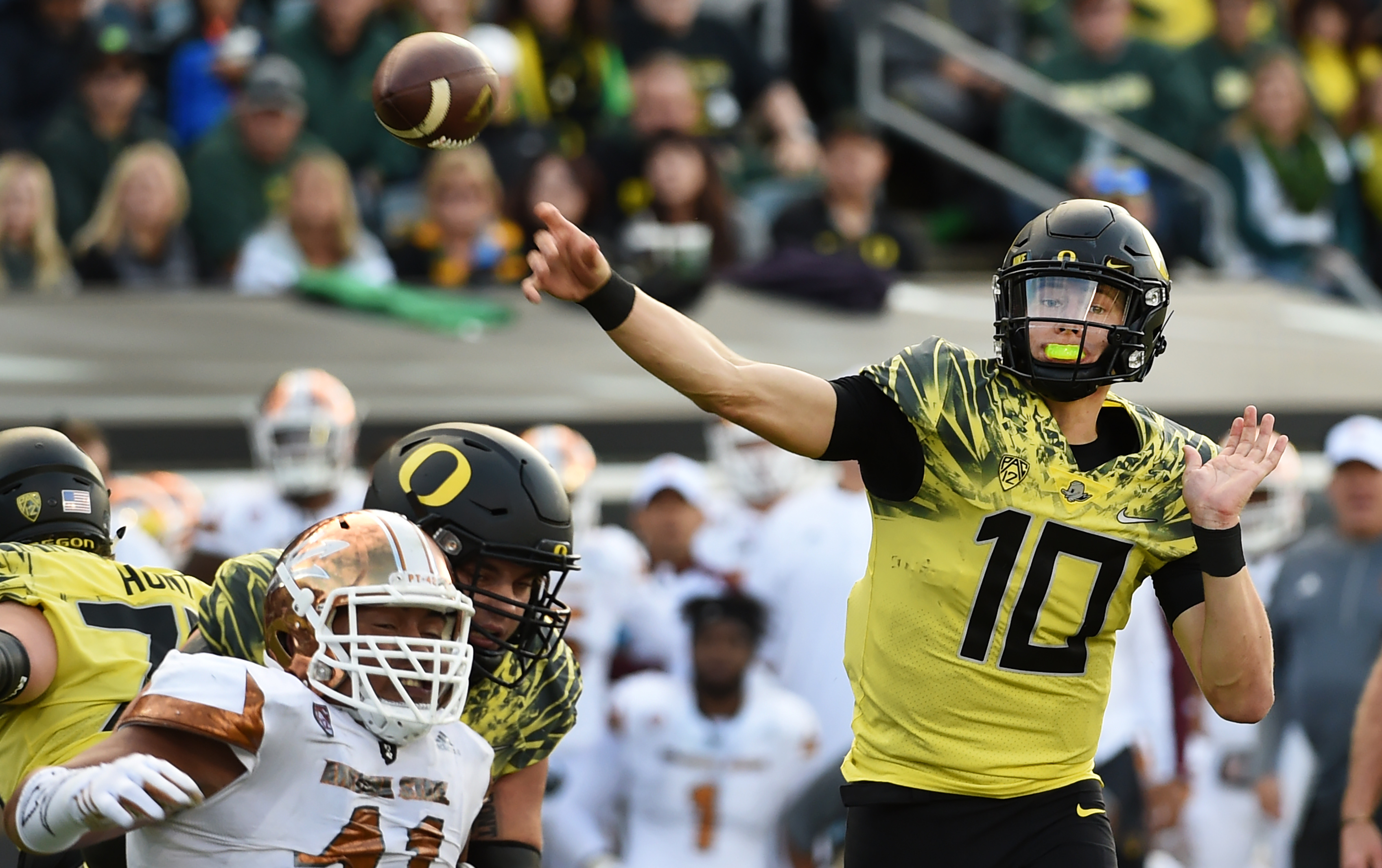 Fab Frosh: Justin Herbert has been magical in his Oregon debut, setting four school records in the first three starts of his career. He has a daunting task leading the Ducks into the Coliseum, where the Trojans have a big, gifted young quarterback of their own. (Photo by Steve Dykes/Getty Images)

On Nov. 5, the Oregon Ducks will travel to Southern California to take on the USC Trojans in what most years has been an important game for both teams. Unfortunately for the 2016 Ducks, there will be no magical run to a meaningful New Year’s Eve matchup. However, a win this weekend could keep them in contention for the postseason.

The Ducks are coming off a 54-35 win at home against Arizona State last week. Eugene native and freshman quarterback Justin Herbert threw for 489 yards and four touchdowns while the team got 132 yards from running back Tony Brooks-James. In Herbert’s last two starts, he has thrown 10 touchdown passes while leading an offense that has averaged 51.5 points per game. This is the type of team Duck fans have been used to, and he may be the one to help salvage their season and their immediate future.

USC Has Their Own Star Quarterback

Oregon will have its hands full trying to stop USC quarterback Sam Darnold who has also thrown 10 touchdowns in the past two games and 18 overall this season. While his yardage totals aren’t as eye-popping as the ones that Herbert are putting up, they are impressive in their own right. The Trojans have averaged 46.5 points over the past couple of weeks against Arizona State and Cal, while allowing only 19 points per game over that stretch.

At 5-2 in conference play, the Trojans are one game behind Colorado in the Pac-12 South division. As they have previously beaten Colorado, the Trojans would conceivably have the tiebreaker if they both finish with the same conference record. Therefore, a win for USC could propel them toward a shot at the conference title game and a New Year’s Six bowl game.

Oregon will have plenty of motivation to make sure that they spoil that party and make their own case to play in late December or early January. If Oregon wins three of their final four games, they would have six wins and qualify for a bowl game. Even a spot in a minor game could do wonders for the mental state of a young team not used to losing more than one or two games a year.

Oregon looks like a team that has figured out what it wants to do and who will help them shape their identity as a program. Although the Ducks have struggled this season, they are putting points up in bunches, which should result in a quality road win against USC this weekend.