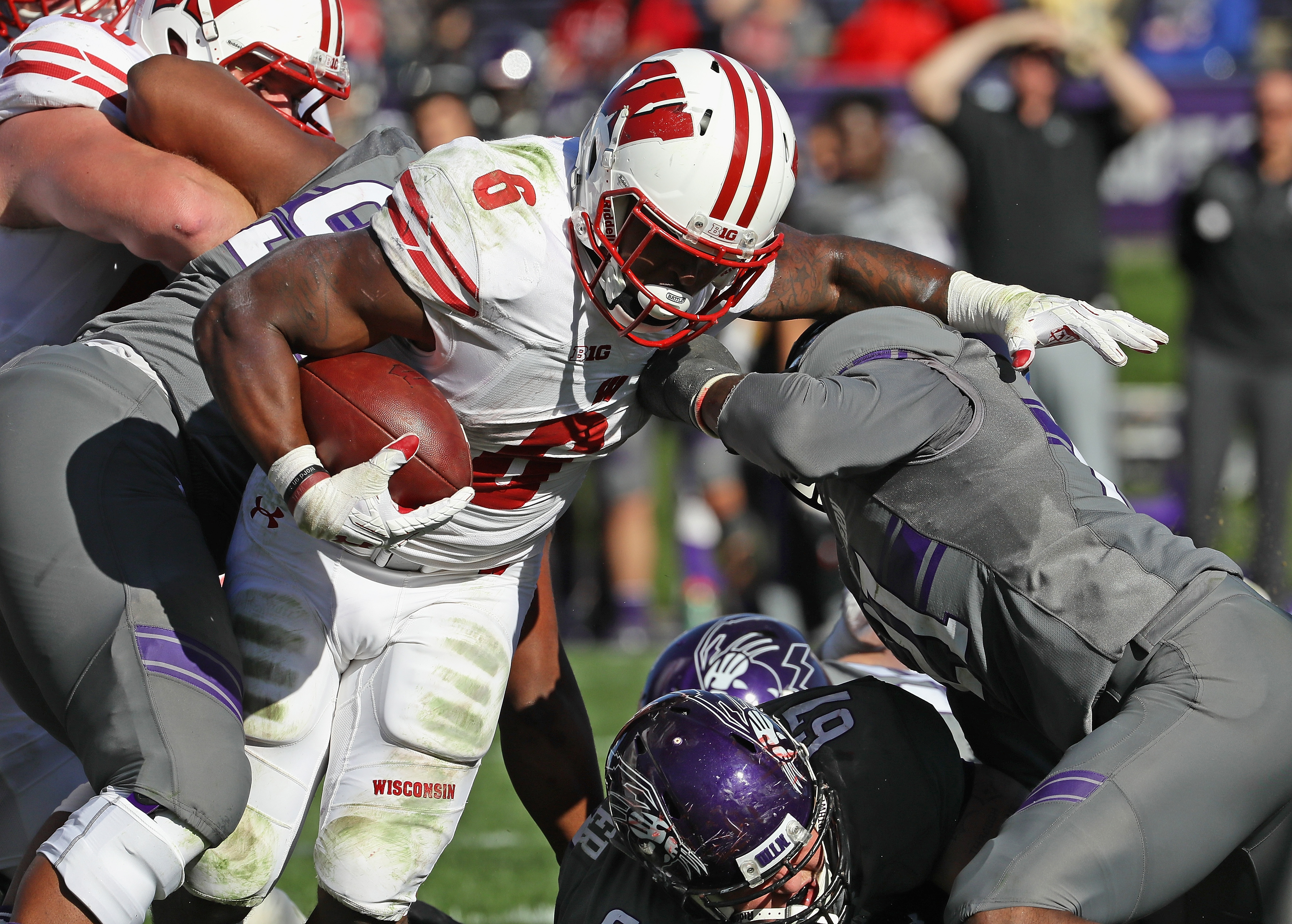 Every week since going 1-2 against the Big Ten East has felt like an elimination week for the Wisconsin Badgers West division title hopes. Wisconsin staved off elimination in emphatic fashion on Saturday, beating Northwestern 21-7 at Ryan Field.

Wisconsin’s win did more than keep its division title hopes alive, it also took care of a four-game losing streak in Evanston, Ill.

Just don’t expect this group to rest on its laurels too much, especially with the likes of Purdue, Illinois and Minnesota on the docket to end the season.

“I don’t think the hard part is done,” said junior safety D’Cota Dixon following the victory over Northwestern. “This time of the season, it’s all mental. If you take a team lightly than we deserve that loss because we lost it Monday.

“Our approach is not so much every game as being hard or easy, it’s doing what we came to do.”

The Badgers got the job done with a dominating run game on both sides of the ball. Senior running back Corey Clement topped the 100-yard mark (106 yards, 1 TD) and Wisconsin racked up 190 yards as a team on the ground.

Meanwhile, Wisconsin’s thorn in its side in a two-game overall losing streak to Northwestern — running back Justin Jackson — was bottled up finally. Jackson came in to this game having put up 301 yards rushing in the previous two games combined. On Saturday he could only muster up 42 yards on 13 carries.

Wisconsin simply took the run game away period, as Northwestern put up just 39 total yards on the ground as a team. It meant that quarterback Clayton Thorson became the focal point of the Wildcats attack – exactly what the Badgers were hopping for.

Thorson completed just 56 percent of his passes for 277 yards and a touchdown, but outside of a crazy day from Austin Carr (12 receptions, 132 yards and 1 TD) the passing game sputtered hard for most of the game.

All of it added up to the Badgers completely dominating possession in the game, controlling the ball for 40:25 of the game.

It all started out like any other Northwestern-Wisconsin battle, as the two teams traded possessions without anything to show for it in the first quarter. However, it was Wisconsin on the board first as kicker Andrew Endicott hit a 40-yard field goal with 11:11 to play in the first half to make it 3-0.

Endicott would have an up and down day and become a vital component of the scoring in this one too. He ended the day 2 of 4 on field goals, missing from 35 yards out in the first quarter and 51 yards with 1:13 to go in the third quarter and Wisconsin needing the points.

Wisconsin made it a 10-0 lead as the offense caught Northwestern napping and Jazz Peavy took a jet sweep 46 yards to pay dirt.

Peavy finished the day as Wisconsin’s leading receiver, catching four passes for 73 yards and putting up a team-high 144 all-purpose yards.

With an 10-0 lead and all the momentum going its way, Wisconsin relaxed just a bit too much late in the first half. Northwestern, which hadn’t gotten much of anything going in the first half, found plenty of space to work with on its final drive of the half.

A dormant passing game came alive, as Thorson moved the chains with big plays to both Austin Carr and superback Garrett Dickerson, who’s 28-yard reception on 4th and 1 kept hope alive for the Wildcats.

One play later and it was a 13-yard bullet to Carr from Thorson and the score was suddenly 10-7 with just 39 seconds remaining in the first half.

However, the Wildcats couldn’t take that momentum and run with it, in large part to a defense that got enough pressure and simply didn’t allow Northwestern anywhere to run the ball.

Of Jackson’s 42 total yards in the run game, 28 of them came on one play in its lone touchdown drive.

Wisconsin’s defense woke up following that final drive of the first half, allowing just two Northwestern possessions to pass midfield. The second of those became the catalyst for the Badgers to put this game away.

As Northwestern passed in to Badger territory, Conor Sheehy would come off the edge to blast Thorson and cause a fumble just before Thorson was to pass. It was scooped up by D’Cota Dixon and brought it back inside Northwestern territory.

The Badgers offense pounced on the opportunity this time around, as Bart Houston largely handed off his way to a touchdown drive.

Wisconsin rushed XX times for 26 of UW’s needed 45 yards for a touchdown. Only a crafty 19-yard pass from Houston to Jazz Peavy on a 2nd and 9 from the NU 34-yard line broke up the heavy dose of the run game.

It was all capped off by Clement punching it in for the 19-7 lead. Houston then led the two-point play, only to have few options open and a pass interference call allowed Alec Ingold to plunge in for a two-touchdown lead at 21-7.

Wisconsin also continued its domination of the West division since its inception prior to the 2014 season. The win moved UW to 12-3 in West division games over the past two-plus seasons.

The win, coupled with Ohio State’s huge victory over Nebraska gives the Badgers control over their own destiny in the West division race. With games against Illinois, Purdue and Minnesota remaining the path to a return to Indianapolis is pretty clear for the Badgers.