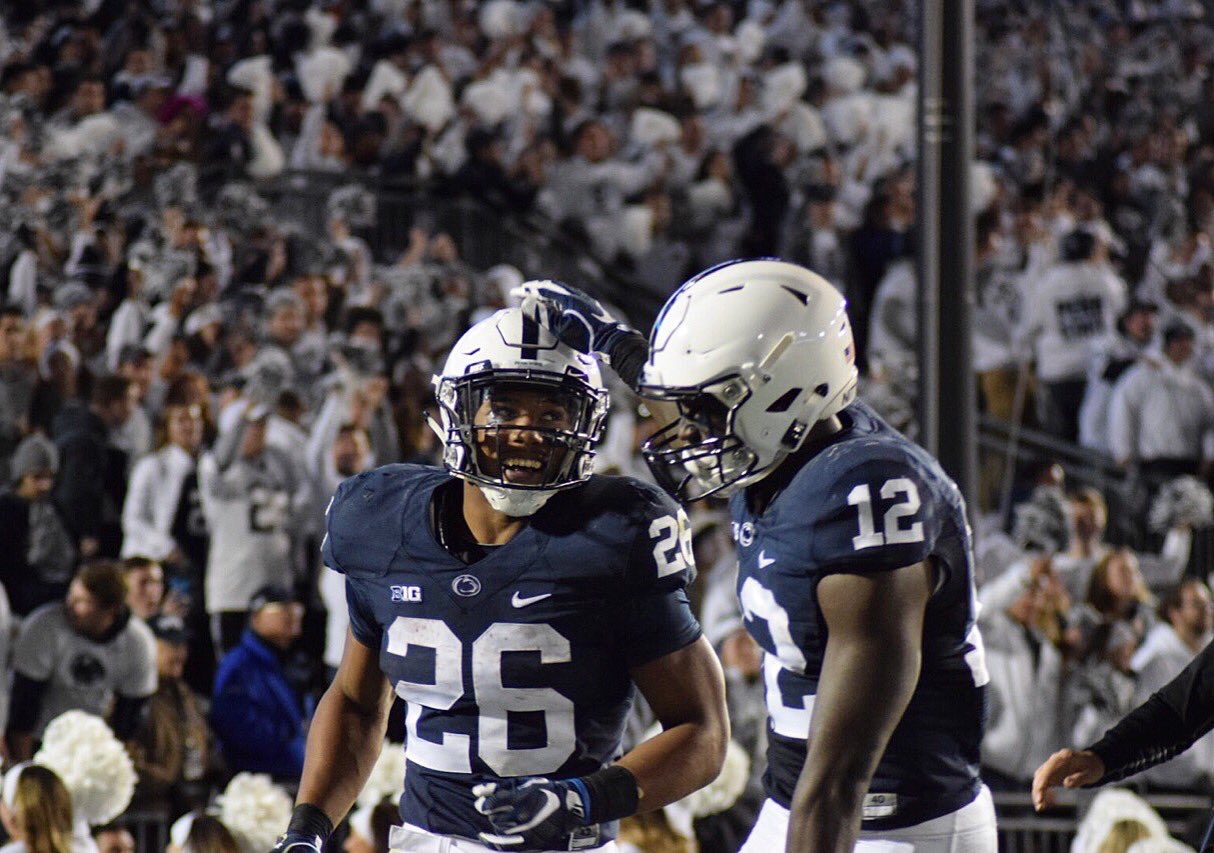 Penn State wasted no time getting ahead in this one as Miles Sanders returned the opening kickoff to the PSU 48. Runs of nine yards by Barkley and 14 yards by McSorley led to a 19 yard strike from McSorley to Saeed Blacknall who burned Thorpe Award winner Desmond King. 7-0 PSU. Iowa moved the ball to the Penn State 34, but on 4th and one, Iowa QB C.J. Beathard leaped over the pile, but so did linebacker Jason Cabinda who stood up Beathard short of the sticks. Penn State got back to work quickly as McSorley hit Godwin for 45 on the first play of the drive. The drive would stall deep into Iowa territory, and Tyler Davis’ field goal try was blocked. After a series of punts, Penn State took over on their own 20. The offense moved to the 43, but faced a 3rd and 5. Offensive coordinator Joe Moorehead went to his star running back Saquon Barkley to pick up the first down, he ended up breaking it for a 57 yard touchdown. 14-0 Nittany Lions. After another strong stand from the defense, the Nittany Lions got the ball back looking for more. This drive was the Mike Gesicki show as he caught passes of 13  and 5 yards before streaking wide open down the sideline for 44 yards. It was initially ruled a touchdown, but his knee was down at the one. McSorley took care of it himself on the next play punching it in, 21-0. Iowa answered with a 7 play 75 yard drive, capped off by a 12 yard screen pass from Beathard to Akrum Wadley, 21-7 with little time before half. McSorley and the unit quickly moved down the field, the big play was a 25 yard pass to Thompkins. Penn State was able to get a 30 yard field goal as time expeired in the half, 24-7.

The second half got off to a slow start with three straight punts, but on their second drive of the half, Penn State was able to get a 37 yard field goal to make it 27-7. As the 4th quarter started, Beathard was picked off by Troy Apke who returned it to the Iowa 44. It only took Penn State one play to score as Barkley went out for a pass and beat the linebacker and was wide open. McSorley hit Barkley for the 44 yard strike, 34-7. After another poor Iowa drive, Penn State took over looking for the knock out punch. Miles Sanders racked up 32 rushing yards on the drive as Penn State moved to the Iowa 13. Moorehead got very creative on the next play lining up back up QB Tommy Stevens at wide out. Stevens took the jet sweep, ran over King and took four guys into the endzone with him. 41-7. Iowa did answer as Beathard hit Jerminic Smith for a 36 yard touchdown, 41-14. Tommy Stevens was now in at quarterback and moved the team down the field. He broke a 45 yard run in which he embarrassed King again by breaking his ankles. Penn State decided to melt the clock and end the game deep in Iowa territory.

Penn State played another close to perfect game tonight. The offense got hot early and Barkley had another big night with his 211 total yards and 2 touchdowns. McSorley had one of his more efficent games as a starter and is really starting to mature. Moorehead’s play call was perfect tonight and I really liked his choice on getting Stevens involved as a runner becuase he is a really good one,as the tape would show. Gesicki seems to be healed from his ankle injury and had another nice game. The big thing to me was how the offense went right at Iowa’s star DB Desmond King and won. Blacknall burned him for the score and Stevens ran him over, and then broke is ankles. If the offense keeps up this play, they will be hard to beat. The 599 yards was very impressive and showed plenty of balance, but the 359 rushing yards against a tough defense showed the talent of Barkley and his two QBs.

The defense exceeded my expectations. only giving up 30 rushing yards was huge. they made Iowa one demsional, practically ending their chances at a comeback. Cabinda’s big stop on fourth down was aturning point in the game and Iowa’s offense never seemed the same after that play. Giving up 14 points was really impressive, although they really only gave up 7, Iowa did score in garbage time. Beathard was a good challenge for the young defense, and they won the battle. No player on defense had a huge game, it was a very balanced stat sheet and shows just how deep this unit is becoming.

I knew the #12 Nittany Lions would probably win this game, but I didn’t expect this blowout. The team is playing as good I’ve seen in years and this team is becoming legit. Franklin has his guys playing at a very high level, and he’s got his eyes on 10-2.

Up next: at Indiana