QBs who are rising and falling after Week 9 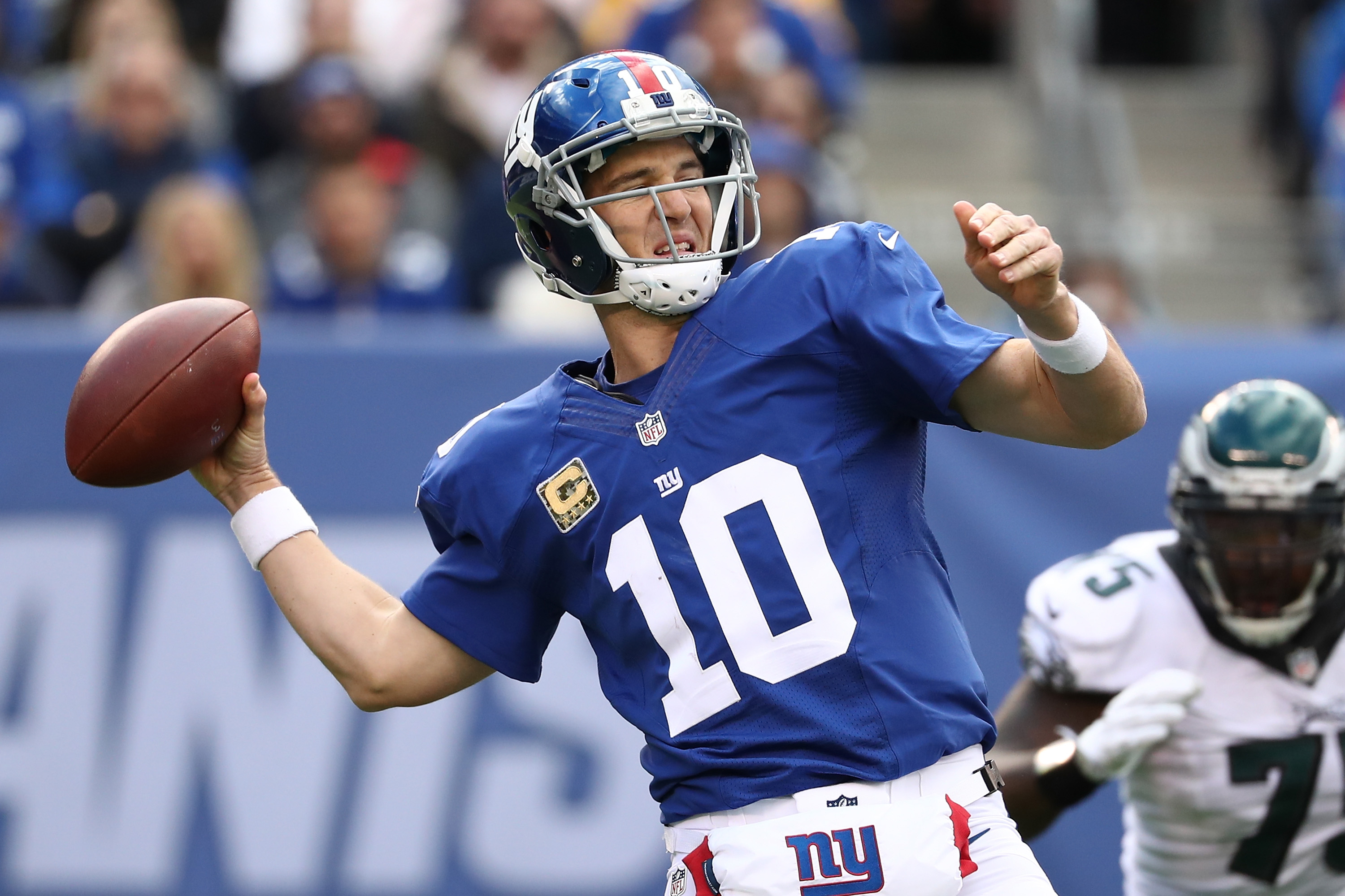 QBs who are rising and falling after Week 9

And two teams who do have their quarterbacks for this generation saw once again that even the most glorious of careers will include some tough times.

Carson Wentz and the Eagles were the flavor of the month in September. Now, Eli Manning and the Giants (5-3) are second in the NFC East and the Eagles (4-4) are in last place in the division.

Manning threw four touchdowns passes for the first time this season in the Giants’ 28-23 win over the Eagles at MetLife Stadium. The Eagles (4-4) had allowed only eight touchdown passes all season going into the game.

The Giants’ defense gave Manning short fields with two interceptions early in the game, and Manning didn’t let those opportunities go to waste.

After a Landon Collins interception gave the Giants the ball at the Eagles’ 31, Manning threw a 26-yard touchdown pass to Odell Beckham Jr. to make it 7-0 two and a half minutes into the game.

Andrew Adams intercepted Carson Wentz on the Eagles’ next possession and brought it to the 30. Manning turned that into a 30-yard touchdown pass to Roger Lewis to make it 14-0 just 5:17 into the game.

Equipped with an anemic rushing attack that averaged 2.3 yards per carry, Manning completed 22 of 36 passes for 257 yards. He was intercepted twice. The second of those interceptions came in Giants territory and gave the Eagles a chance to win the game with under two minutes left, but the Giants ultimately never trailed in the game and they’ve won three straight.

The good news is that Carson Wentz threw for 364 yards, a rookie record for the Eagles. The bad news is that 357 of those yards came after Wentz threw two interceptions and essentially handed the Giants a 14-0 lead a little more than five minutes into a game the Eagles would eventually lose 28-23.

Carson Wentz is the first player this season to throw interceptions on his team's first two drives of a game. pic.twitter.com/XjrmWAOF7x

Since throwing 134 passes without an interception to start his career, Wentz has thrown five interceptions and just four touchdown passes in the last five games. The Eagles (4-4) have lost four of those five and currently occupy last place in the NFC East.

Wentz’s counterpart, Eli Manning, did his best to help Wentz put together the first game-winning drive of his career. With the Giants (5-3) leading 28-23, Manning threw an interception in Giants territory, giving the Eagles the ball at the Giants’ 34 with just under two minutes left.

After completing a 17-yard pass to Nelson Agholor, however, Wentz failed to complete his last four passes and the Eagles lost the ball on downs.

Wentz completed just 3 of his last 11 passes. He finished with 27 completions on 47 attempts with no touchdowns.

Now he knows what it’s like to be a rookie in the NFL.

Matthew Stafford became the first opposing quarterback to win at U.S. Bank Stadium as the Lions stunned the Vikings 22-16 in overtime.

It looked like the Vikings (5-3) would end their two-game losing streak and remain unbeaten at home when they took a 16-13 lead with 23 seconds left. The Lions had the ball at their 25 with no timeouts. Stafford completed an 8-yard pass to Golden Tate and a 27-yard pass to Andre Roberts, then hurried to the Vikings’ 40 to spike the ball with two seconds left.

Stafford would still be pondering another heartbreaking Lions’ loss if it weren’t for Matt Prater’s 58-yard field goal that sent the game into overtime, but when the Lions won the coin toss Stafford didn’t allow the Vikings to see the ball in OT. The Lions overcame four third downs in the extra session, including one on a penalty. On the last of those third downs, Stafford threw a game-winning, 28-yard touchdown pass to Golden Tate.

Stafford completed 23 of 36 passes for a modest 219 yards and two touchdowns against the league’s fourth-ranked passing defense. He threw his first interception since Week 4. But a week after losing at Houston, Stafford proved he could beat a top-tier defense on the road and the Lions (5-4) are just a half-game out of first place in the NFC North.

The Packers could use a better defense and they’ve suffered some injuries on offense. But that doesn’t excuse Aaron Rodgers from struggling against the NFL’s 30th-ranked passing defense.

The Packers lost to the Colts 31-26 at Lambeau Field, and a fourth-quarter flurry made the final score palatable.

Rodgers completed just 7 of 17 passes for 77 yards and a touchdown in the first half and the Packers went into the locker room down 24-10.

The Packers had the ball to start the second half, but a six-minute drive ended with an interception. T.J. Green picked off Rodgers in the end zone, but it was negated by offsetting penalties. Then on the next play, Darius Butler intercepted Rodgers.

The Colts (4-5) extended their lead to 31-13 with 9:35 left in the game, and Rodgers threw two of his three touchdown passes in the final 7:41 to keep the Packers alive until the Colts got the last first down they needed to close the game out with two minutes left.

Rodgers finished with 26 completions on 43 attempts and 297 yards.

Green Bay had a chance to tie the Vikings atop the NFC North after the Vikings’ loss to the Lions. Instead, the Packers are in third place.

As if being 0-9 weren’t bad enough, the Browns watched a guy they could have drafted efficiently lead the Cowboys to a 35-10 victory Sunday at Cleveland.

The Browns drafted Cody Kessler in the third round, with the 98th pick. The Cowboys took Prescott in the fourth round with the 135th overall pick.

Kessler completed 19 of 27 passes Sunday and has shown that he could turn out to be a decent pick, but at this point in time he’s no Prescott.

Carson Wentz might have drawn the Ben Roethlisberger comparisons in September, but as the season unfolds Prescott’s rookie year is much more similar to Roethlisberger’s.

Dak Prescott is hard to deny at this point. pic.twitter.com/u1EewKbUn8

In leading the Cowboys (7-1) to their seventh straight win, Prescott completed 21 of 27 passes for 247 yards with three touchdowns and no interceptions. He snapped a mini-skid in which he threw an interception in two straight games.

The milestones keep piling up for Prescott. His 12 touchdown passes this season break Troy Aikman’s franchise rookie record, according to ESPN.com.

Prescott will need to earn a Lombardi Trophy or two to ultimately be comparable to Aikman. But on Sunday he reduced the number of people who don’t think he deserves to take Tony Romo’s job.

Ben Roethlisberger was a game-time decision less than three weeks after having surgery on his torn meniscus.

The decision was for Roethlisberger to start. He was able to practice, so the Steelers can’t be blamed for starting him over Landry Jones. But Jones couldn’t have been any worse through the first three quarters of the Steelers’ 21-14 loss at Baltimore.

Roethlisberger completed eight of 18 passes for 54 yards with an interception through the first three quarters and the Steelers had just two first downs. He finally found his rhythm in the fourth quarter, throwing for a touchdown and rushing for another to pull the Steelers to within 21-14 with 48 seconds left. He salvaged a stat line of 23-for-45 for 264 yards.

The Steelers (4-4) are 2-6 in Roethlisberger’s first game back from injuries in his career. Not only did they have that working against them, but Roethlisberger hasn’t been as effective on the road. Since 2014, he’s thrown 51 touchdown passes at home and 19 away from home.

So while it’s not all that surprising that the Steelers laid an egg in Baltimore considering those historical trends, Roethlisberger gets thrown into the bin of “falling” quarterbacks this week because the Steelers’ game plan suggested that he might have come back too early.

The Steelers insisted on feeding Le’Veon Bell even though the Ravens (4-4) allowed him to gain just 2.3 yards per carry. Meanwhile, Antonio Brown didn’t catch a pass until 3:22 remained in the first half.

If Roethlisberger was ready to play, why didn’t he throw the ball more?

Roethlisberger and the Steelers, regarded as Super Bowl contenders before the season, have lost three straight and now must share first place in the AFC North with the Ravens.

If Matt Ryan has anything to say about it, the Falcons won’t collapse like they did last season.

It was the second straight win for the NFC South-leading Falcons (6-3). Ryan completed 25 of 34 passes for 344 yards. He leads the NFL with 23 touchdown passes. He needs nine more to tie his career high. He’s also on pace to throw fewer than the career-low 10 interceptions he tossed in 2010.

Ryan’s 2,980 passing yards also lead the NFL. His 119.0 passer rating and 69.6 completion percentage are second only to Tom Brady in both categories, but he’s played five more games than Brady.

Matt Ryan: On pace for 4th-best single-season passer rating (119.0) in NFL history. 2 of 3 players above him won MVP (A.Rodgers, P.Manning).

Matty Ice could ice the MVP trophy if he keeps this up.

The Jaguars lost 19-14 to the Chiefs Sunday, which means that they could have won the game if it weren’t for Bortles’ customary slow start.

With four minutes left in the first half and the Chiefs leading 10-0, Bortles had 38 passing yards with no touchdowns and an interception according to Football Perspective.

That interception probably put holes in walls all over northern Florida. It looked more like a complete pass to wide open Chiefs linebacker Ramik Wilson than an interception.

The Chiefs might have a reputation as an elite defense, but they came into the game in the middle of the pack in terms of pass defense. They ranked 13th with 257.3 passing yards allowed per game and 20th with 13 touchdown passes allowed.

Bortles made it mildly interesting with a 13-yard touchdown pass to T.J. Yeldon to pull the Jaguars to within 19-14 with 4:10 left. The Jaguars (2-6) got the ball one more time but lost it on downs with two minutes left.

The final tally for Bortles was 22-for-41 for 252 yards with two touchdowns and an interception. He’s completed 59.2 percent of his passes, tied for 42nd among the 59 players who have thrown passes this season.

It wouldn’t be surprising if Jaguars scouts were taking a long look at quarterbacks on Saturdays this season.