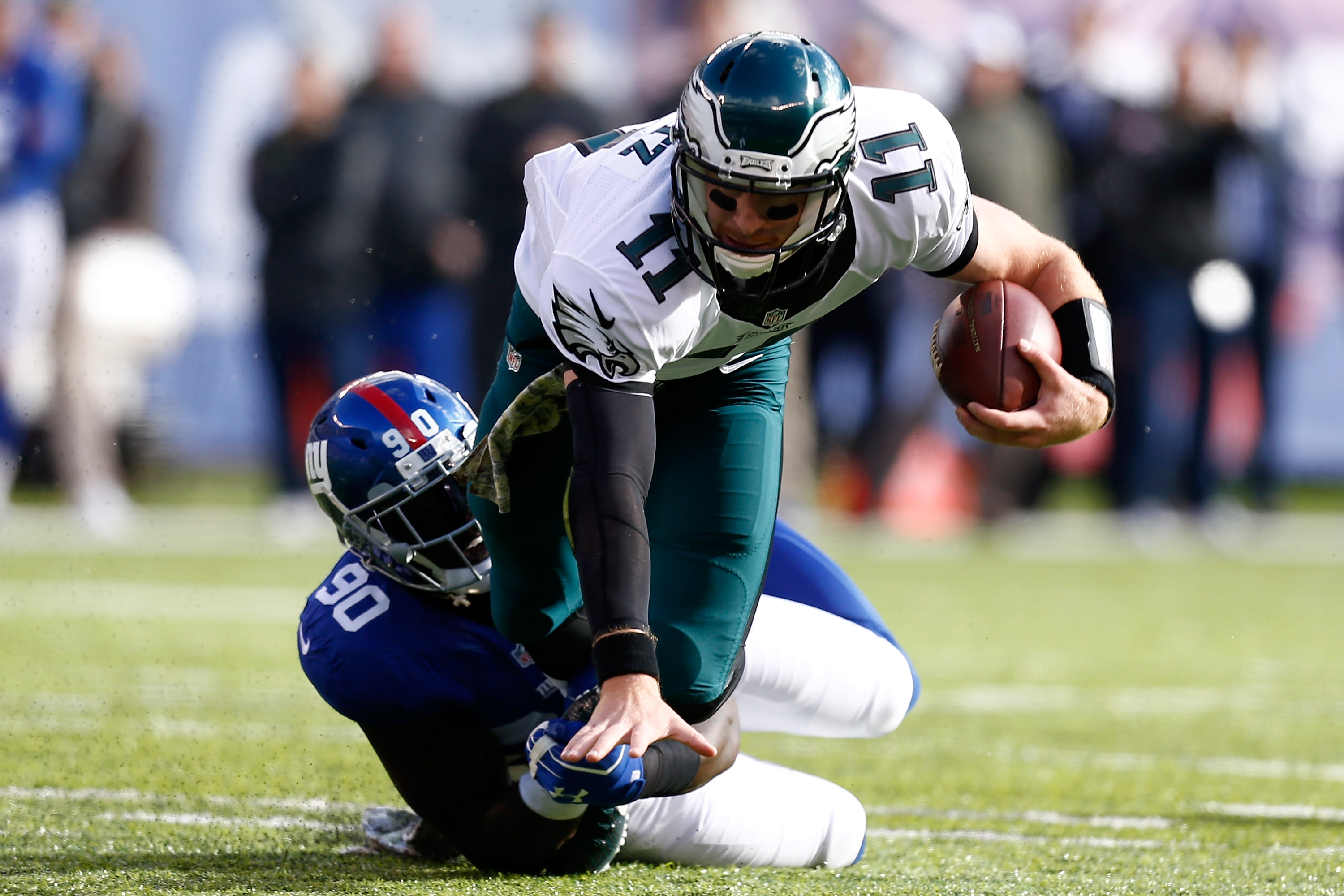 It was quite an eventful afternoon, and the Eagles fell short to the New York Giants by the final score of 28-23.

After forcing an early three-and-out on the Giants offense, Carson Wentz and the Eagles took the field, and struggled early. An early forced throw led the rookie quarterback to another interception on the year when the ball landed in the hands of Landon Collins.

Eli Manning and the Giants took advantage of the early turnover with a 26-yard touchdown strike from Manning to receiver Odell Beckham Jr. for an early New York touchdown.

On the Eagles very next drive, Wentz threw another pick, this time to Andrew Adams. Once again, Manning and the Giants took advantage with a wide-open 30-yard touchdown pass to receiver Roger Lewis.

Wentz showed signs of improvement on the Eagles third drive with two straight quick strikes to right end Trey Burton, and one to a debuting Bryce Treggs. The drive would result in the Eagles first points of the game with a 34-yard Caleb Sturgis field goal.

The second quarter saw more of Treggs when Wentz hit the rookie receiver for a 58-yard bomb to set up an eight-yard touchdown run by running back Ryan Mathews.

Late in the second quarter, the Eagles looked to finally put more points on the board with a 40-yard field-goal attempt by Sturgis, however  defensive lineman Jason Pierre-Paul blocked the attempt, setting the Giants up with good field position with a minute left in the half. The Eagles defense kept the Giants from doing any more damage before the end of the half.

The Eagles opened the second half with the ball, and came out firing with big gains from Sproles as well as receiver Nelson Agholor. The drive was capped off with a three-yard touchdown run by running back Kenjon Barner.

The Giants would march down the field with an answer of their own when Manning found rookie receiver Sterling Shepard for a 32-yard touchdown strike.

Early in the fourth quarter, the Eagles got a big turnover when cornerback Nolan Carroll ripped the ball from Beckham’s hands just before it hit the ground for what would be ruled an interception. Despite getting the ball near midfield, Wentz and the off failed to produce points from the turnover.

After a 38-yard Sturgis field-goal, the Eagles found themselves within a score when linebacker Jordan Hicks came up with an interception to give the Eagles the ball back with less than two minutes to play. The Giants however were able to hang on and keep the Eagles from getting a game-winning touchdown.

Next Sunday, the Eagles will head back home to take on Matt Ryan and the Atlanta Falcons. Kickoff is scheduled for 1 p.m.