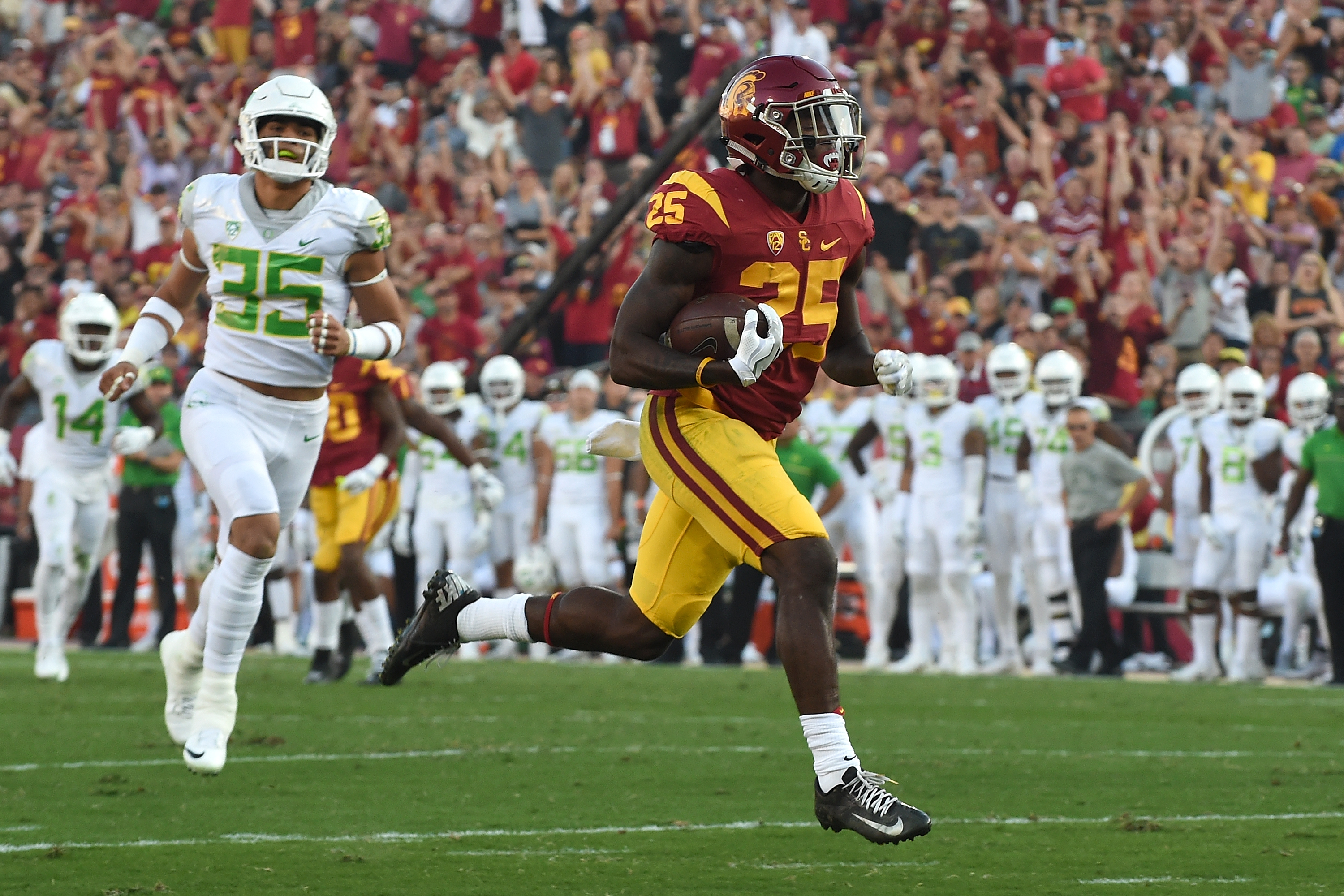 No-contest Conquest: USC tailback Ronald Jones ran for 171 yards and four touchdowns Saturday, and each was easier than the one before. (Photo by Lisa Blumenfeld/Getty Images)

I haven’t been writing much, because the state of this team is so depressing.

Christian McCaffrey ran for 199 yards last weekend against Oregon State. That projects to a very blue-state 250-yard landslide this weekend in Eugene.

The coach goes to the interview table after the game and makes jokes, deflects the rumors of his impending dismissal with brittle and unconvincing sarcasm.

He makes mumbling, mealy-mouthed excuses. He says “it’s on me” and “we have a million things to clean up” but doesn’t change anything or take command of the situation.

I’d have more respect for him if he just got mad. One time. Showed some fight. Stormed into the locker room and overturned the Gatorade bucket, gave a speech something like this:

His players seem too comfortable, too comfortable with losing. At midfield after the game there were jokes and smiles, friendly reunions with old teammates and rivals from high school.

Especially disconcerting is the lack of effort in games. On certain plays the Ducks seem to just fold. They played half the snaps behind the sticks.

The team used to have playmakers and leaders that set the tone, guys like LaMichael James, Kenjon Barner, and Jeff Maehl.

The current team lacks leadership. You don’t see many players making an effort like this. On Saturday there were plays when the entire offensive line collapsed. The defense is porous and dispirited.

The most talented players on the squad, Royce Freeman and Darren Carrington, seem completely detached. Freeman is apparently hurt, physical unable to give the effort that characterized his first two seasons. He used to be a beast to tackle, one of the best in college football. Now he just lays down at first contact.

As a young player Carrington displayed the body control and game breaking ability that marked him as a future star and potential NFL player. In the last few weeks he’s gotten progressively worse and disinterested, no longer starting. He makes poor adjustments to the ball, drops touchdown passes and plays like he’s in a permanent sulk.

True freshman Troy Dye, Brenden Schooler and Justin Herbert are the bright spots in this motley collection, the last remnants of the Win the Day culture. Sophomore Jalen Brown is emerging as a real threat at receiver, and Tony Brooks-James looks like the next great Oregon running back.

But after what we’ve seen, does anyone have confidence that Mark Helfrich can instill the pride and passion that characterized Oregon football before he took over?

The Ducks are lollygaggers now. It’s a simple game of block and tackle, run, pass and catch. They’re young and getting used to losing. Maybe they need someone to scare them a little.