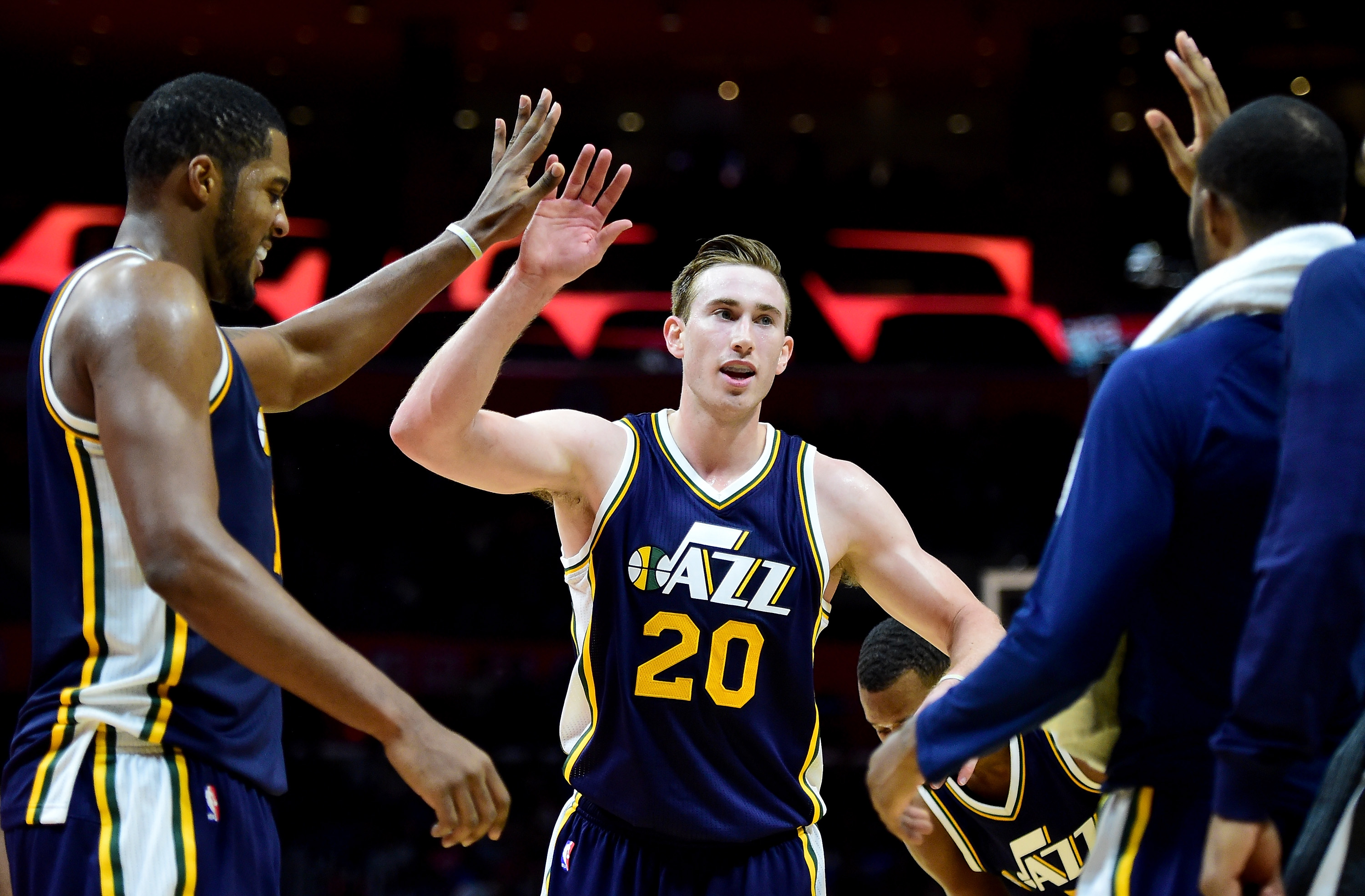 A little over a year ago, Utah came into Philadelphia on the second night of the season and swiftly dismantled the 76ers, 99-71. Last night was a similar story, as the Jazz buried a young, winless Philadelphia team, 109-84.

Just when it seemed the like Jazz were skating on thin ice, they managed to turn things around and make a massive statement. Following a 1-2 start and facing a stretch with three games in four nights against Dallas and San Antonio (twice), Utah beat the then-undefeated Spurs and went 2-1 to climb back to .500. Now they’re 5-3 and rising fast.

This past Sunday they welcomed back Gordon Hayward, who did not shy away from contact during the matinee at Madison Square Garden, earning 14 trips to the free-throw line on his way to 28 points. Sure, his fractured finger was on his non-shooting hand, but it was nice to see Hayward play so aggressively in a game where he struggled from the field and the Jazz trailed for much of the night. Then George Hill suffered a sprained right thumb late, which forced him to sit out of Monday’s matchup. As soon as one player returns to full health, another gets bit by the injury bug.

No matter, though. Against the Sixers, Hayward got whatever he wanted, making a solid defender in Rob Covington look like a lame duck. Hayward has range, boasting career averages of 1.2 threes per game on 35.9 percent shooting. However, he’s not afraid to take what the defense gives him, so when players press up he can scoot by with ease. As defenses become more and more geared to stopping threes and protecting the rim, it will become increasingly more important for players to develop their mid-range games. Of course there is a time and place for taking these shots since they are the least efficient, but Hayward seems to have a firm grasp of when to embrace the mid-range jumper, as does fellow backcourt mate Rodney Hood.

Hood continues to blossom in his third year, and he was extremely efficient, dropping 18 points on seven-of-13 from the field. Derrick Favors also had his best night of the young season, doing most of his damage on offense from the mid-range area. This was the best he has looked thus far in the regular season, and though the Sixers have typically brought the best out of their opponents over the past few years, they’ve hung close versus some of the top teams in the league to begin 2016-17. Hopefully this is a step in the right direction for Favors, who has dealt with no shortage of injuries over the last year.

However, the truth of the matter is that Utah has been Trusting the Process since before we started capitalizing it. Years upon years of patience, drafting well in the middle-late rounds, and valuing each and every pick has paid off. How else does a franchise wind up selecting Rudy Gobert and Rodney Hood after Nerlens Noel and Michael Carter-Williams and then grab Trey Lyles after Jahlil Okafor? The Jazz still have a lot to figure out if they hope to elevate themselves from hopeful underdog to championship contender—unless of course they plan on shocking the entire world by winning it all this year. A decision will need to be made on Derrick Favors, who has dealt with a myriad of ailments and serves better as a center than a power forward in the small-ball era. Yet, the core seems mostly set with Hayward, Hood, Gobert, George Hill, and (probably) Trey Lyles. If there’s a team lacking a superstar that can win a title in today’s NBA, this is it right here. For goodness sakes, they’re bringing a player who is top-10 in makes all-time from beyond the arc off the bench in Joe Johnson. Dante Exum is still a spring chicken, too.

Meanwhile, the 76ers may be a one-man band. His name is Joel Embiid, and he may soon have the power to tear down entire states, Utah included. Everything revolves around him now and in the future, and it’s unclear how many players from the current Sixer roster will accompany him on his first trip to the playoffs, whenever that may be. Covington was able to lift himself out of a miserable shooting funk, and his 3-and-D profile seems to fit well with Embiid. Dario Saric has checked out as a serviceable and improving shooter, and he could be a piece that sticks as well. Beyond that, Sergio Rodriguez has helped immensely and shown that the years of seasoning overseas did him well, but he’s already 30 and playing the league’s deepest position. It will be interesting to see what Rodriguez’s role becomes when Ben Simmons gets back. Sergio’s steady hand has helped make the Sixers as competitive as a winless team can possibly be, but does he slide into a bench role with Simmons operating as the full-time point guard? Who else is a long-term fit for this club?

One thing that needs to change immediately (in my opinion) is Brett Brown’s backup big man rotation. Pairing Ersan Ilyasova and Jahlil Okafor is a recipe for the worst defensive disaster in NBA history, which was rather evident on Monday night. I think Ilyasova needs to join the starting lineup for now in order to help with the spacing, and because Embiid can make up for his defensive limitations much better than Okafor can. Whether this means bringing Covington, Saric, or Gerald Henderson off the bench I don’t particularly care, but Ilyasova-Okafor is “close your eyes and earmuff it!” bad on D, a gory bloodbath that should be reserved for only the sickest horror films.

It also might be time to cut the cord on playing Nik Stauskas big minutes and start funneling some more towards rookie Timothe Luwawu, who threw down a vicious one-handed slam in his two minutes of garbage time last night. In a contest where the 76ers were getting beaten badly for the entire second half, Luwawu and the team could benefit from him receiving more live reps.

The Sixers have plenty of time, but that doesn’t mean they can afford to waste it. Every contest is a learning experience, both for Utah and Philadelphia. Jazz coach Quin Snyder opted to run several starters late in the fourth quarter in order to get extra reps and build chemistry, but for the first time all season Brett Brown looked like a man without any semblance of a plan.