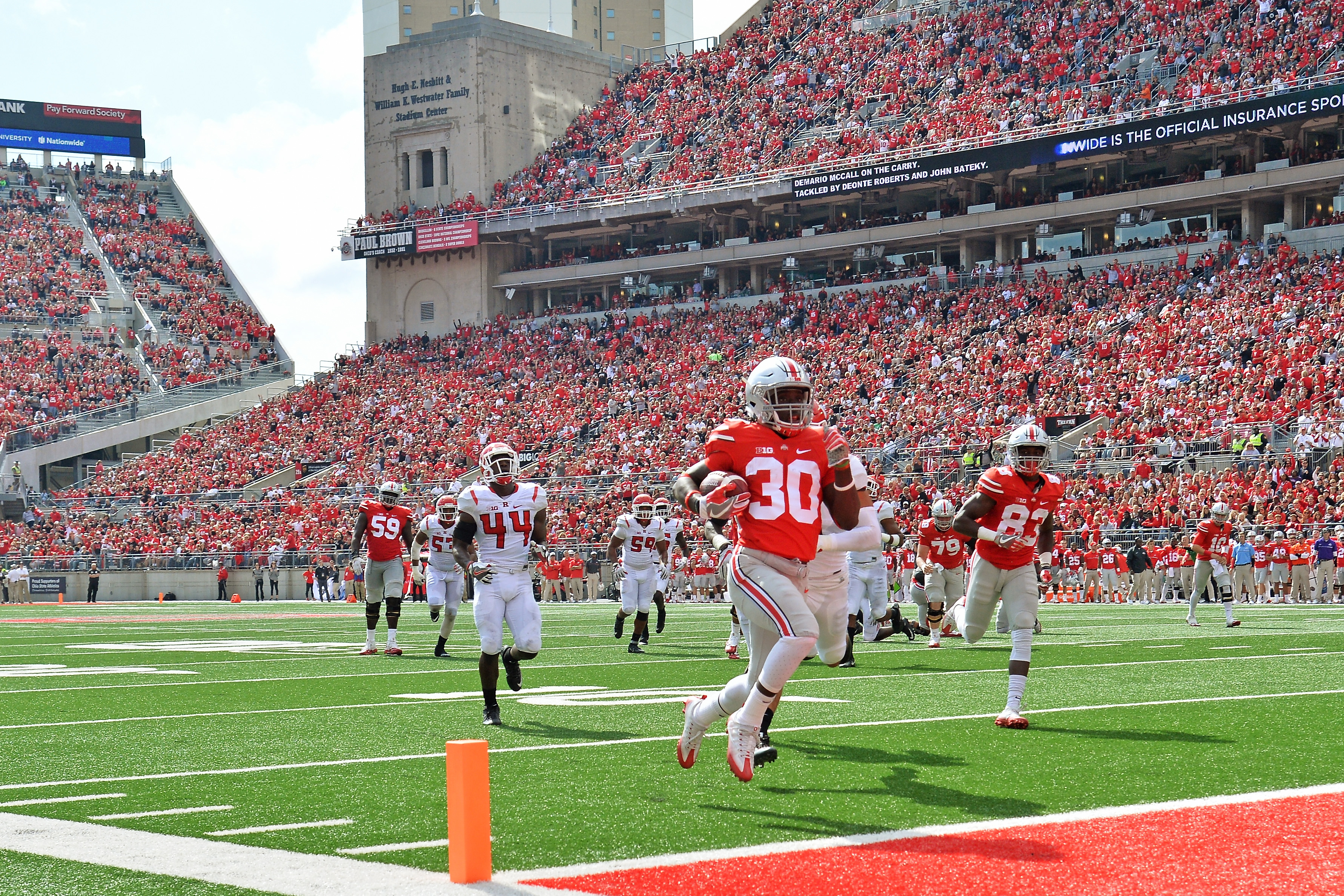 Saturday night in Columbus was filled with excitement as Ohio State was navigating their way through the world’s easiest corn maze en route to a 62-3 victory of a previously ranked top-10 opponent.  As great as the victory over the Cornhuskers was, the Buckeyes did not come out unscathed as Mike Weber injured his shoulder leaving his status for Saturday in doubt.

Also asked about Mike Weber. Says it's a sprained shoulder but they expect he will play this week. No contact in practice though. #Buckeyes

Let me preface the rest of the article with this, I know a sprained shoulder is something many running backs have to deal with.  I realize it is not something that is considered a serious injury.  I have no doubt that Mike Weber could go out there tomorrow and rush for 100 yards if the coaching staff asked him to.  With all of that said, Mike Weber should sit on Saturday and rest up.  Please hear me out.

The Maryland Terrapins come into this game giving up 226 rushing yards per game on over five yards per carry.  While these numbers are not good, they really do not tell the entire story and make Maryland sound better than they are.  After the first four games of the season, the Terrapins were riding high and sitting at 4-0.  People thought they were good, completely ignoring the quality of their opponents, and the Maryland defense appeared to be respectable.  In those first four games, the Terrapins had showed a very respectable rush defense as those teams combined for 156 rushes on 476 yards (119 yards per game and 3.05 yards per carry) and only two touchdowns.

Much like many teams during the early part of the season, this was all a smokescreen for the team’s actual ability…or in this case inability.  As the Terrapins came into the non-Purdue part of their B1G schedule, the Maryland rush defense began to show their massive holes.

As you can see over the next five games, teams began to run at will against the Terrapins averaging 312 rushing yards and over three rushing touchdowns per game.  Against the only two ranked teams on the schedule (PSU & UM), they gave up 645 total rushing yards and eight touchdowns.  In the past two weeks, they have given up a whopping 11 touchdowns on the ground to Michigan and Indiana.  The rushing defense of Maryland is one of the worst we have ever seen.  There is no reason to even risk the possibility of Weber getting injured as they head into big games against Michigan State and Michigan.

Let’s take a second to fast-forward to the 2017 season.  The Buckeyes will be without Curtis Samuel (barring a huge surprise) and Dontre Wilson the two people relied upon to spell Weber.  Additionally, there is the possibility Barrett may be gone which would leave Weber all by himself.  These three players have combined for 220 rushes through nine games.

Even outside of the actual number of carries, these three players give the coaching staff an experienced player who can carry the ball in any situation without fear of how they will react based off of game situations.  Whether it is a first down run in the second quarter or a pivotal fourth and one in the final minutes of the game, the coaching staff has no fear giving the ball to any one of these guys if Weber is unavailable.

For the season, McCall has 217 yards rushing on 36 carries and two touchdowns.  Every single one of those carries have come in the second half with Ohio State up by at least 15 points.  There is no pressure there at all for the true freshman.

There is no doubt about it, McCall is going to play a huge part of the offense next year so the coaching staff should give him the opportunity to show his abilities.  This is the perfect kind of game to not only build the confidence of McCall but also build the confidence of the coaching staff in McCall.  He has shown how he can be a dynamic player and he could play a huge role down the stretch run of this season if he can prove himself on Saturday.

We’ve established Weber should not play.  We’ve established Maryland is historically bad at stopping the run.  We’ve also established the Buckeyes should turn to Demario McCall. Now we have to talk about the final piece of the puzzle…DO NOT MESS WITH CURTIS SAMUEL.

COLUMBUS, OH – NOVEMBER 5: Curtis Samuel #4 of the Ohio State Buckeyes celebrates in the end zone with Billy Price #54, Jamarco Jones #74 and Isaiah Prince #59, all of the Ohio State Buckeyes, after scoring on a one-yard touchdown reception at the end of the second quarter against the Nebraska Cornhuskers at Ohio Stadium on November 5, 2016 in Columbus, Ohio. (Photo by Jamie Sabau/Getty Images)

Saturday night, the Buckeyes went back to what worked early in the season and fed Curtis Samuel early and often out of the H-Back position.  They did not primarily line him up in the backfield and pretend he was Mike Weber.  They did not completely ignore him until the second or third quarter.  They used him the way he should be…as a dynamic play maker who can play multiple position.

For the love of all things college football, do not mess with what worked on Saturday night.  Let Barrett and the offense continue to find some offensive rhythm as they head into the games against Michigan State and Michigan.  Sitting Weber and playing Samuel as the every down running back could possibly be detrimental to the success of the offense over the next couple of weeks.  Leave Samuel alone and simply rely on McCall to be the bell-horse back.  When McCall needs a breather for an extended period of time, use Samuel sparingly and let Antonio Williams get some carries.  I have no doubt two freshmen can carry the load against the Maryland rush defense.