Are the Indiana Pacers in Trouble? 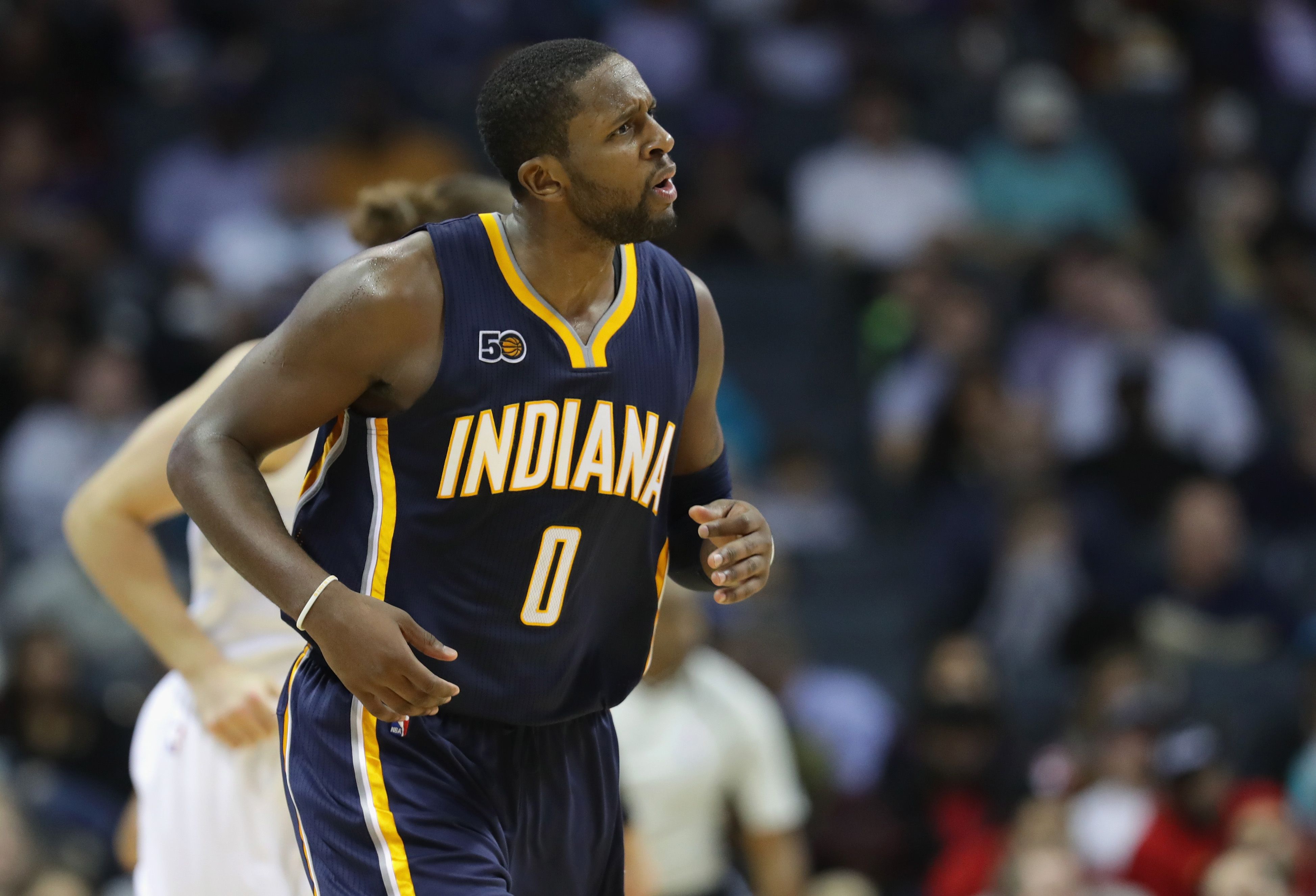 Are the Indiana Pacers in Trouble?

Despite all the big-name additions Indiana made this offseason, Paul George’s Pacers find themselves outside of the top-eight teams in the East through 10 games.

This past Wednesday night, the Pacers climbed back to .500 by the skin of their teeth, beating the 76ers (minus Joel Embiid, in a game I did not watch) at the Fieldhouse in overtime. With Embiid back for Friday’s rematch in Philly, Indiana miraculously forced overtime, but came up short in the extra period, falling back to 4-5.

Coach Nate McMillan switched C.J. Miles, who has been melting defenders faces off, into the starting lineup and moved Monta Ellis into a sixth man role. This might prove to be a sound decision on McMillan’s part, as the pairing of Jeff Teague and Ellis is weak defensively and ball dominant on offense. Miles offers elite outside shooting and a much longer wingspan, and he was one of four Pacers to finish with a positive Plus-Minus (+9). Ellis still saw 36 minutes off the bench, finished +2, and took more shots (19) and scored more points (19) than any Pacer besides George, who had 26 points on 20 shots. No one else on Indiana had more than 10 field-goal attempts. Ellis has only averaged 9.0 field-goal attempts per game, so this is not an indictment on him or George, but Myles Turner needs to be so much more involved on offense.

Of course, the one caveat here is that Turner was limited to 21 minutes due to foul trouble, picking up his sixth in overtime. He and Embiid each exited the game within the first three minutes of the first quarter after committing two fouls apiece, and unfortunately the whistles didn’t stop there. Validity of the foul calls notwithstanding, Embiid took three times as many shots (18) as Turner (six) in only five more minutes (26) than Indy’s sophomore, dominating the fourth quarter and overtime by scoring 16 of his career-high 25 points in those two sessions while Turner’s lone trey in OT brought him to a grand total of five points before his disqualification.

Obviously this game represents an extreme case, but it illustrates an issue in Indiana’s offense. Sure, the Sixers just picked up their first win of the season, but the Pacers could take a page out of their book and try feeding their immensely talented young center on offense more often. Turner is hitting on 54.7 percent from the floor, and there’s no excuse for him to be taking only 10.6 shots per night when he is the best pick-and-pop and pick-and-roll big man on the team. Since opening the year with 30 points (on 13-of-19 from the field), 16 rebounds, four blocks, and two steals in 37 minutes against the Mavericks in a thrilling 130-121 win, Turner has seen 30 minutes just twice in the eight games since then, averaging a mere 9.5 field-goal attempts per game. That is inexcusable.

Maybe more patience should be afforded to a roster with a new head coach and no shortage of fresh faces, but these players just doesn’t seem to complement one another, and they certainly don’t seem to be on the same page regarding the squad’s pecking order. It’s clear Turner is capable of becoming George’s costar and that his development is vital to the Pacers’ hopes of returning to title contention in the near future.

At this early point in the season, I think much of the blame belongs on the shoulders of Jeff Teague, who is shooting 38.5 percent and hoisting 12.1 attempts per contest. The sooner Teague is averaging fewer shot attempts than Turner the better, and the former Hawk needs to take a good look around and realize that he may have to become a pass-first player (instead of the guy taking the second-most shots per game on the team) for this squad to succeed. There’s no way for him to replicate what George Hill brought to the table on defense, but Teague should really go back and watch how Hill carried himself and managed Indiana’s offense. He should try to inject some of Hill’s willingness to defer into his own game and realize that he (and everyone else) will get far better looks that way. This team has more than enough guys who can create with the ball in their hands, so it’s what they do when they don’t have the ball that will dictate how good their offense can become. Right now, it doesn’t look like guys are trying to create opportunities for each other in off-ball situations. Far too often it’s just George’s turn, or Ellis’s turn, or Teague’s turn to “make something happen.” Even if the Pacers start making more shots, this strategy will only take them so far.

Off the bench, lineups have the same problem defensively in the backcourt with Ellis and Aaron Brooks that they do with Teague and Ellis, and then Al Jefferson is the backup center. When you swap out George Hill, Solomon Hill, Ian Mahinmi and coach Frank Vogel for Teague, Big Al, Thad, and McMillan, it’s easy to see how the team went from being elite to a steaming pile of dog crap on defense. The Pacers went all-in on the idea that they could outscore their opponents, but so far the chemistry on offense is severely lacking and the defense is completely non-existent. The offseason move that may hurt the most is adding Jefferson for three years and $30 million. Sadly, Jefferson got paid for what he has done in the past, and he exacerbates all the problems that an undersized backcourt presents. In 22 minutes on Friday, he pitched in a hollow 10 points (4-8 FG, 2-3 FT), four fouls, three rebounds, two assists, and one turnover. In total, the Pacers were -3 with Jefferson on the floor. Meanwhile, Indiana was a team-high +14 during Lavoy Allen’s 20 minutes, with the former Temple Owl, 76er, and local standout contributing two points (0-3 FG, 2-2 FT), three assists, two rebounds, two fouls one steal, one block, and one turnover. I contend that Allen would be better off operating as the backup 5 on a full-time basis and that Jefferson is an example of Indiana building a fantasy basketball team that appears to have valued #numbers instead of on-court fit and the gritty little things needed to win basketball games.

Perhaps the Pacers can still come together; there’s certainly still plenty of time for everybody to get on the same page. Nevertheless, the clock is always ticking in the NBA, and Indiana sure has a lot to figure out going forward.