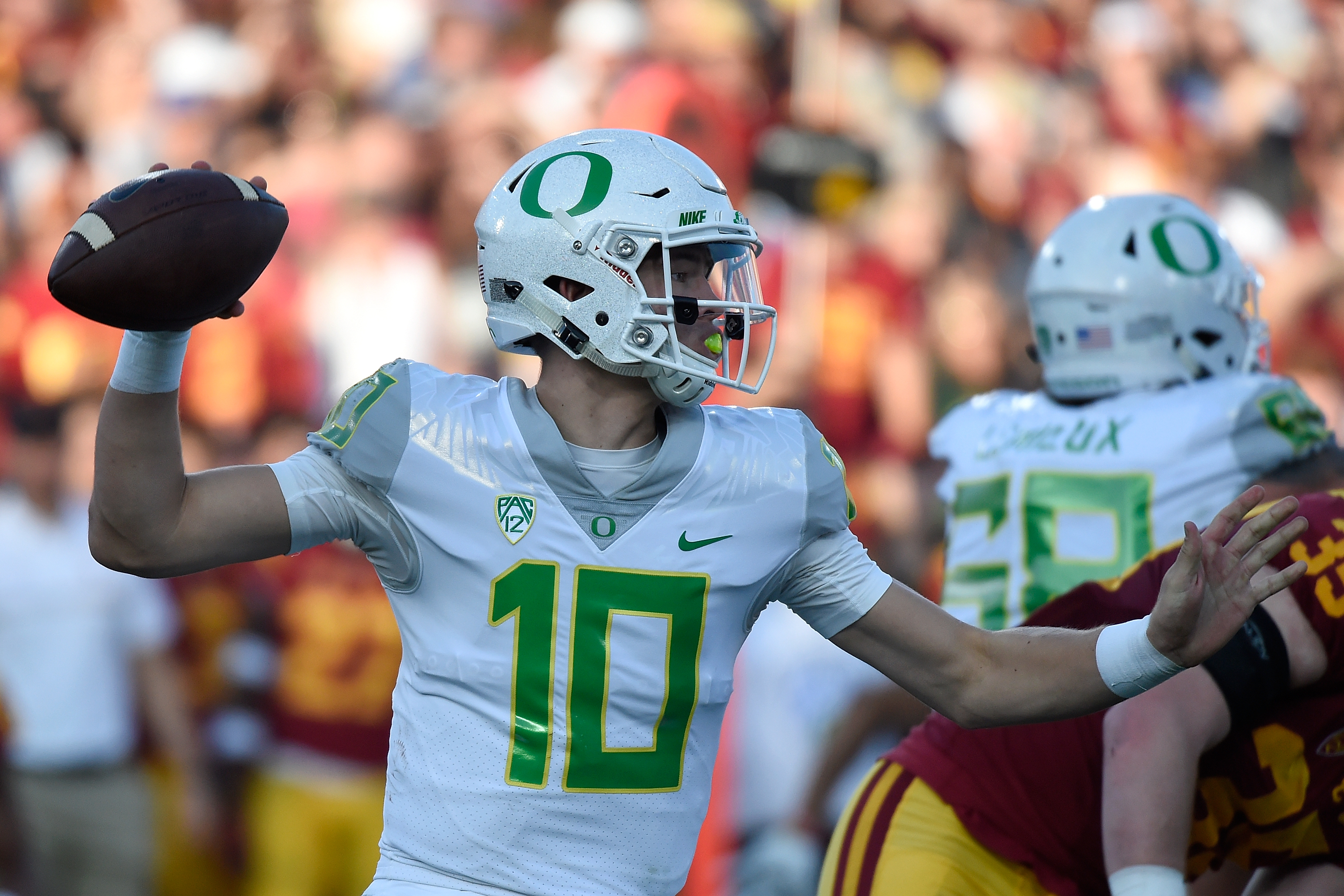 After being overwhelmed by the Trojan blitz in Los Angeles, Justin Herbert and his young offensive line are sure to face more pressure when Stanford invades Autzen Stadium. Handling the twists and stunts better are key to securing a fourth win. (Photo by Lisa Blumenfeld/Getty Images)

Oregon hosts Stanford this Saturday in their final home game this year. The seniors will try to rise to the occasion of Senior Day to help erase the memory of a disastrous final season. The Ducks’ record currently sits at 3-6. That is a nightmare for a school that in recent years has become accustomed to being one of the elite schools in the nation. Stanford is a three-point favorite according to Las Vegas.

Fortunately for the Ducks, Stanford has not had a great year either. The Cardinal have a 6-3 record, but they have been blown out in a few games. That includes a 44-6 loss to Washington and a 42-16 loss to Washington State in back-to-back games. Their offense can be very bad, and they even were held to five points in a loss to Colorado. Since that loss though, Stanford has won two in a row against Arizona and Oregon State. They are starting to play better, but their offense would sputter again in front of a hostile crowd at Autzen.

Stanford running back McCaffrey is one of the best players in the nation. He is a threat to bust a long play every time he touches the football. With the Oregon defense giving up 238.7 rushing yards per contest to opposing teams, Stanford will look to run the ball with McCaffrey as much as possible. It is up to the Ducks defense to key in on McCaffrey and force Stanford to beat them through the air. Since missing the Notre Dame game, McCaffrey has returned to form, racking up 460 rushing yards in three games, including 199 yards last week against Oregon State.

If Oregon is to have any hope of winning this game, they are going to have to load the box to stop the potent Stanford rushing attack. This means that they will have to rely on their secondary to win a lot of one-on-one matchups against the Cardinal receivers. Chryst is not a very good quarterback. In their most recent game against Oregon State, Chryst completed just 10 of 17 passes for 60 yards and no touchdowns. The Oregon defense will take their chances against those kinds of numbers.

Oregon has been playing much better since true freshman Herbert was installed as the signal caller. The Stanford defense has been the strength of the team other than their two blowout losses against the schools from Washington. Herbert will need to be patient, read the blitzes correctly and limit his mistakes against them. If he can avoid turnovers and the Ducks defense can step up against the Stanford running attack, the Ducks have a great chance to steal a victory from Stanford and salvage some pride about their season.