QBs who are rising and falling after Week 10 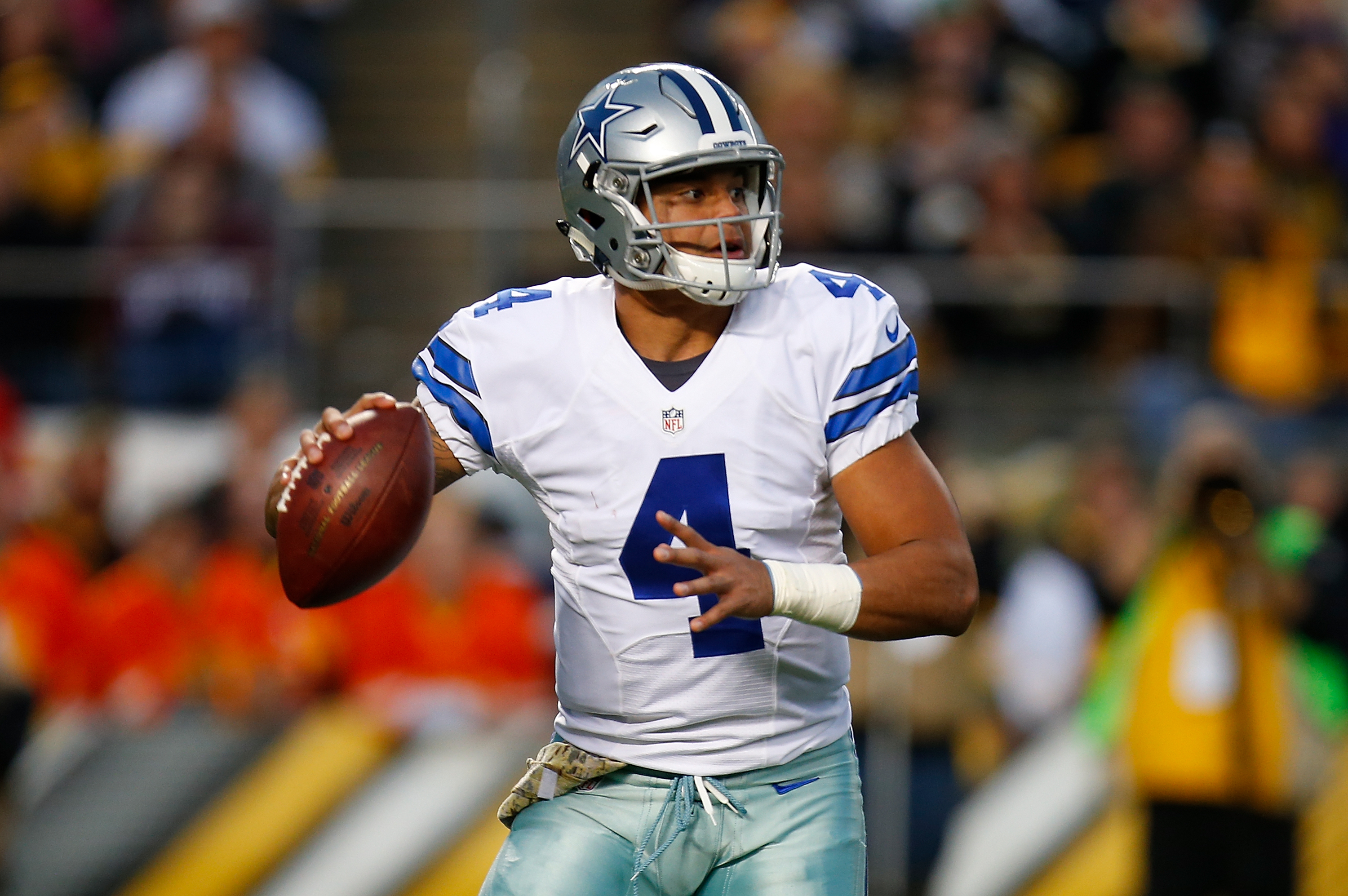 QBs who are rising and falling after Week 10

Week 10 of the NFL season was a great one for quarterbacks drafted in the last two years.

Some of the league’s established stars? Not so much. There were some nice milestones, but many of them came without a win.

Dak Prescott has some fourth-quarter comebacks under his belt in his rookie season, but none as dramatic as Sunday’s 35-30 win at Pittsburgh.

Ben Roethlisberger’s 15-yard touchdown pass to Antonio Brown on a fake spike put the Steelers (4-5) ahead 30-29 with 42 seconds left.

But Prescott wouldn’t let that fake spike become as famous as Dan Marino’s. He completed three passes for 28 yards and a facemask penalty put the Cowboys (8-1) in field-goal range. It turned out they didn’t need the field goal because Ezekiel Elliott ran 32 yards for the game-winning touchdown with nine seconds left.

Tony Romo has been the elephant in the room during Prescott’s rise to stardom, but Prescott earned his way into the same sentence as Roger Staubach Sunday. He’s led the Cowboys to their first eight-game winning streak since Staubach did it in the Cowboys’ 1977 championship season. Prescott’s win at Heinz Field Sunday can go right next to his win at Lambeau Field earlier this season as a centerpiece on his mantel.

Oh, and Prescott turned in the first 300-yard game of his career Sunday, throwing for 319 yards while completing 22 of 32 passes with two touchdowns and no interceptions. One of those TDs was an 83-yard catch-and-run to Elliott that pulled the Cowboys to within 12-10 in the first quarter. The other was a 50-yarder to Dez Bryant on third-and-11 that gave the Cowboys a 23-18 lead late in the third quarter.

Sure looks like Tony Romo said "now's his time" after Dak Prescott threw that TD https://t.co/tT2QSJ9CNO

Romo better get used to watching if he isn’t used to it already.

The Dolphins came into Sunday’s game 22nd in the league with five interceptions.

They have nine now.

Philip Rivers threw four interceptions for the first time since 2012 and the second time in his career. All four came in the fourth quarter, including a 60-yard pick-six by Kiko Alonso that turned out to be the winning points in the Dolphins’ 31-24 victory at San Diego.

Tony Lippett intercepted Rivers on the Chargers’ next possession to lock up the win for the Dolphins (5-4). It was Lippett’s second interception. The first came in the end zone.

Rivers threw three touchdown passes but completed only 23 of his 44 throws for 326 yards. He became the ninth quarterback to throw 300 touchdown passes in a career, but that is of little consolation after a loss that pretty much dooms the Chargers’ playoff chances. They fell to 4-6 and are two and a half games out of the second wild-card spot that is occupied by the third-place Broncos. If the season ended after Week 10 every team in the AFC West would make the playoffs except the Chargers.

Marcus Mariota hopes to one day be in the same company as Aaron Rodgers.

He took a step in that direction Sunday by outshining Rodgers in a shootout at Tennessee.

The second overall pick in the 2015 draft completed 19 of 26 passes for 295 yards without an interception. He’s thrown 17 touchdown passes and three interceptions in the six games since the Titans’ 1-3 start.

League leader in TD passes since week 5? Marcus Mariota…who also has yet to throw an INT inside the RZ in career. 29 TD's. No picks. Wow.

Mariota is fourth in the NFL with 21 touchdown passes, surpassing his rookie-year total of 19. He’s also just one behind Rodgers in that category.

Matt Ryan remains an MVP candidate. He just didn’t play like one in the Falcons’ 24-15 loss Sunday at Philadelphia.

Ryan completed just 18 of 33 passes with a touchdown and an interception. He threw for 267 yards, but the Falcons’ 303 yards of offense was their lowest output of the season.

About a quarter of those yards came when Ryan threw his only touchdown pass, a 76-yard connection to Taylor Gabriel that gave the Falcons a 15-13 lead with 13:15 left in the game.

The Eagles (5-4) missed a field goal on their next possession, which put the Falcons in business at their own 45. Ryan couldn’t take advantage of the favorable field position, however, throwing three straight incomplete passes. The Eagles built a 24-15 lead, and Ryan picked the worst time to throw the interception. Leodis McKelvin picked him off with 1:33 left and the Eagles took a knee.

Ryan and the Falcons (6-4) can’t shake the specter of their collapse last season. They’ve lost three of five since their 4-1 start.

Jameis Winston is out here playing backyard football against the Bearshttps://t.co/ApFNgYAJcR

That was a 39-yard completion to Mike Evans, and on the next play Winston increased the Buccaneers’ lead over the Bears to 24-10 with a 43-yard touchdown pass to Freddie Martino.

Winston completed 23 of 33 passes for 312 yards with two touchdowns and one interception in Tampa Bay’s 36-10 victory. After throwing eight interceptions in the first four games, Winston has thrown two in the last five.

According to the the Buccaneers website, Winston became the youngest quarterback in NFL history to throw 40 touchdown passes.

Just when it looked like Cam Newton and the Panthers could turn their season around, they lost 20-17 at home to the Chiefs Sunday after blowing a 17-0 lead.

The Panthers (3-6) had won two in a row after a 1-5 start. On Sunday, Newton ran for a touchdown and threw for another one to give Carolina that 17-0 lead late in the second quarter.

But the Panthers scored no points in the second half.

Newton completed 23 of 38 passes for 261 yards with a touchdown and an interception. Eric Berry picked him off and returned it 42 yards for a touchdown to narrow the Chiefs’ deficit to 17-14 with 10:32 left in the game.

Newton found his running form again, tying the season-high he set in the opener with 54 rushing yards. But the Chiefs entered Sunday allowing 369 yards per game, 21st in the league. The reigning MVP has to be able to keep putting up points against a mediocre defense to protect his team’s lead.

Kirk Cousins earned himself a little more money this week as he continues to play out his one-year deal under the franchise tag.

Cousins threw for 262 yards in a 26-20 home win over the Vikings. That’s more yards than anyone has thrown against the Vikings’ fourth-ranked passing defense this season.

According to Redskins SPORTalk, Cousins’ two TD passes make him the sixth Redskins quarterback to throw more than 60 with the team.

Cousins started strong and finished strong. He threw touchdown passes on the Redskins’ first two possessions and led them to field goals on their last three. The first of those field goals tied the game 20-20 at the end of the third quarter and the other two provided the Redskins (5-3-1) with their margin of victory. Cousins completed 22 of 33 passes with no interceptions. His 2,716 passing yards were third in the league after the Sunday afternoon games, right behind Matt Ryan and Drew Brees.

And then came the sequel to “You Like That.”

Not that the Bears are going anywhere this year, but Jay Cutler accomplished something in leading them to a 20-10 win over the Vikings last Monday night.

Not even a Hail Mary could save Cutler’s stock in the Bears’ 36-10 loss at Tampa Bay. That’s how Cutler threw his only touchdown pass, a 50-yard hurl that Cameron Meredith came down with in the end zone to narrow the Bears’ deficit to 17-10 at the end of the first half. There would be no more points for the Bears (2-7).

Cutler completed 16 of 30 passes for a measly 182 yards and two interceptions. Those two picks came in the first 10 minutes of the game. The second was a 20-yard pick-six by Chris Conte that opened the game’s scoring. Cutler also fumbled twice and was sacked for a safety. The lost fumble came at the Buccaneers’ 4-yard line with the Bears trailing 7-3 in the second quarter.

Cutler could bounce around the league for another year or two, but it’s hard to imagine any team naming him their starter.