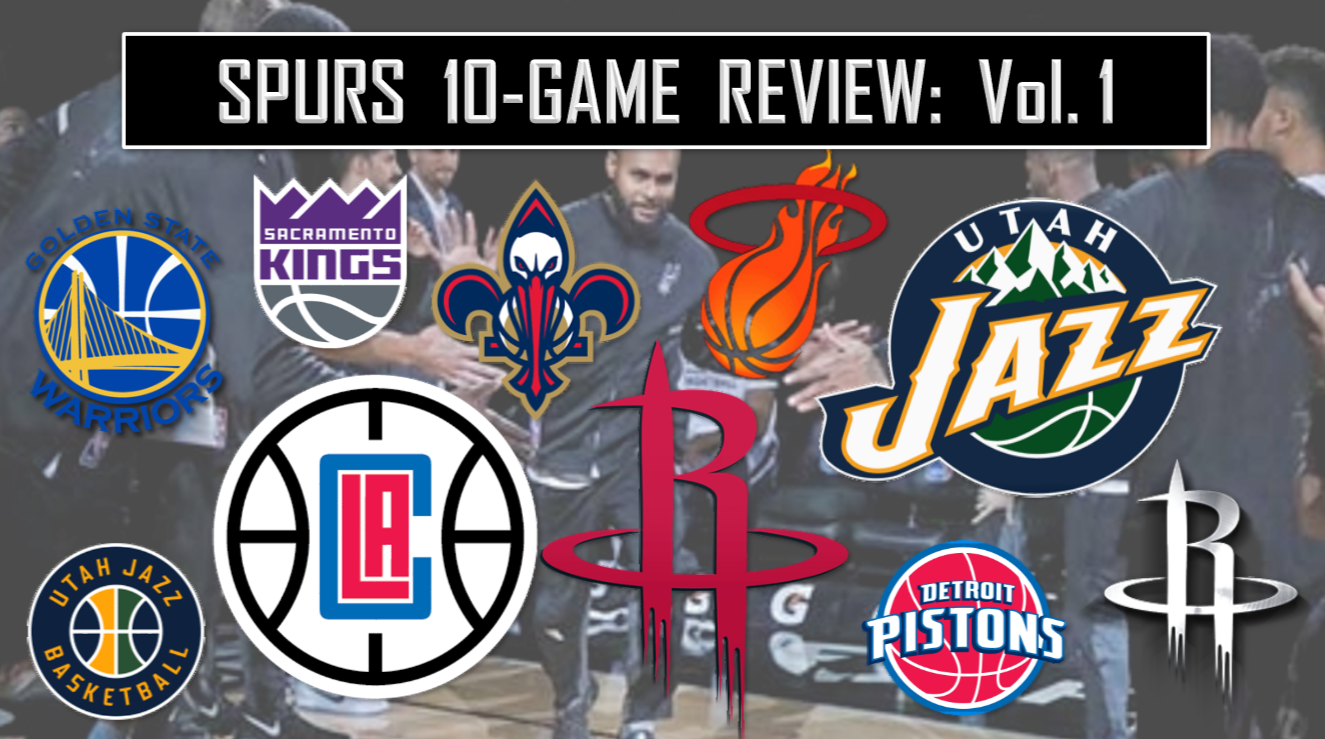 10 games into their 2016-17 NBA season, the San Antonio Spurs (7-3) have won 70% of their first 10 games, as they’ve stayed undefeated on the road (5-0), but lost three surprising games at home (2-3). With seven new players on their roster, the Spurs finally got to their entire starting lineup to play together in their 10th game of the season, since Danny Green and Tony Parker were facing early injuries, while the early schedule forced Spurs Head Coach Gregg Popovich to monitor minutes and tinker with different lineups.

Throughout the season, after every 10 games the Spurs play in, a review will be completed to check in on how the team is doing in the following areas on the floor: Scoring, Passing, Defense, and how the team is playing against elite opponents.

[Editor’s Note: Bench statistics were gathered from HoopsStats.com and as of 11/12/2016, only an 8-game sample size was provided.]

Considering the team has only been healthy and complete for one game this season, they’re already showing to be a Top-10 offense despite their roster being made up of 47% of new players. The one area of concern is the low number of points in the paint per game. Over the last four seasons, the Spurs have averaged 44.7 points in the paint per game. Looking at players who take over 5 shots per game, and where over 30% of their points come from the paint, the players that fit those two categories are: Parker, Jonathon Simmons, Manu Ginobili, LaMarcus Aldridge and Pau Gasol.

Where do the Spurs’ points come from?

As you can see from the data above, while the Spurs do get 35.5% and 23.8% of their points from the paint and 3-point area respectively, they’re close to the bottom of the league in generating points from those areas when compared to other teams around the league. However, one area where they’re starting to make their mark in the league is in drawing fouls and getting to the free throw line. The duo of Leonard and Aldridge are a tough task to guard for opponents, as the two players are reaching the free throw line 12.5 times per game together.

Using the NBA’s Usage Percentages for players, I created the chart below to show the Spurs’ 11 core players and how much of the team’s possessions they’ve been using when on the floor.

The one surprise is that even at age 39, Ginobili (8.4 points, 2.2 assists) continues to be a staple of the Spurs’ system in getting the ball moving whether from his passing or scoring ability. Gasol (10.3 points, 2.8 assists) too, in being a new member to the team, is also getting a good chunk of the offensive responsibility on his end as well, and he’s showing that he can be another offensive weapon every and now and then, as he’s already finished with a 21 point, 20 point and 15-point game through just 10 games this season. Parker’s (7.5 points, 3.8 assists) usage should increase once he starts playing more games, and even though he’s been able to start a few games, Patty Mills’ (10.7 points, 3.9 assists) production should continue as an offensive scoring threat and spacing element off the bench.

Two players to watch in the next 10 games are Simmons (7.3 points, 2.1 assists) and Kyle Anderson (3.0 points, 1.2 assists). While both players don’t have a reputation of being knock-down high-volume 3-point shooters, Simmons has carved an early role for himself in being the backup small forward behind Leonard with the second unit. While Simmons is a stable defender who can guard positions 1-3, he has the ability on offense to drive on close outs, run the pick-and-roll, and he’s dangerous in the open court. Simmons is also third on the team behind Leonard and Aldridge in getting to the free throw line, as he attempts 2.2 free throws per game. As Project Spurs’ John Diaz recently wrote, Anderson has had a tough start to the year because he had to start while Green was out at the 2, and now that the roster is complete and David Lee is playing the 4, a consistent role for Anderson might not be available while Simmons is playing well and being a part of the rotation.

Where do the Spurs rank in Offense thus far?

With the offense primarily running through Leonard and Aldridge, the days of the ‘Beautiful game’ might have passed, as the Spurs’ offense goes as their two All-Stars go. Leonard and Aldridge are both post-up threats, can work together in the pick and roll, and they mainly attack when they have favorable matchups. While the Spurs still use some of their motion sets to try to get open looks, these days, if one of Leonard or Aldridge sees a mismatch or scoring opportunity quickly, the rest of the team will read and react by spacing out to allow that play to develop.

The low turnover number is an interesting development, considering the team is still growing chemistry together with all the new players and different lineup combinations. Anytime a team has low turnovers and doesn’t beat themselves, there’s always a good chance they’ll be able to stay in a ball game.

Drive and kick action is something the Spurs have had trouble defending according to the data, as they rank near the bottom of the league in 3-pointers allowed, corner 3s allowed, and above the break 3s allowed. With Green’s return, the Spurs’ 3-point defense should start to improve since he’ll be better about limiting penetration along with Leonard from opposing guards and wings. The key will be how the Spurs defend attacking style point guards like Russell Westbrook, James Harden, and Chris Paul.

The Spurs are doing an ok job keeping opponents off the free throw line, and that stat too should improve with Green’s return. Even with Gasol, the Spurs are a Top-5 defense in limiting shots at the rim, but the shot they’d rather force opponents to take – the mid-range look, isn’t one opponents are taking often just yet. With Aldridge, Gasol, Lee and Dewaye Dedmon, the Spurs are having success keeping teams from getting second chances out of offensive rebounds.

With new players, the Spurs have also had some games where they’ve had trouble limiting opponent transition points, which is usually a staple of a Popovich coached defense. Those points too should decrease with Green’s return and the more playing time the new players get with the old players.

One player to watch defensively is Gasol. He might end up being a matchup player on defense, meaning against certain teams, where they’ll try to put him in multiple pick-and-rolls to get a guard with a mismatch against him, the Spurs’ coaching staff might have to decide whether to reduce his minutes those nights or live with giving up breakdowns on defense, but keeping Gasol on the floor for his offensive presence.

Where do the Spurs rank in Defense thus far?

With the retirement of their defensive anchor from last season Tim Duncan, and the fact that Green has been out for 80% of the team’s first 10 games, they’re still doing alright on the defensive end, as they rank 7th overall defensively.

The Spurs are currently 2-2 against teams with records of .600 or above.

The Spurs’ next 10 games will take place over the next three weeks from November 14 until December 2. The Spurs might be able to get a string of wins, as only two of their next 10 opponents have records of .600 or better – the Los Angeles Lakers (6-4) and Charlotte Hornets (6-2).