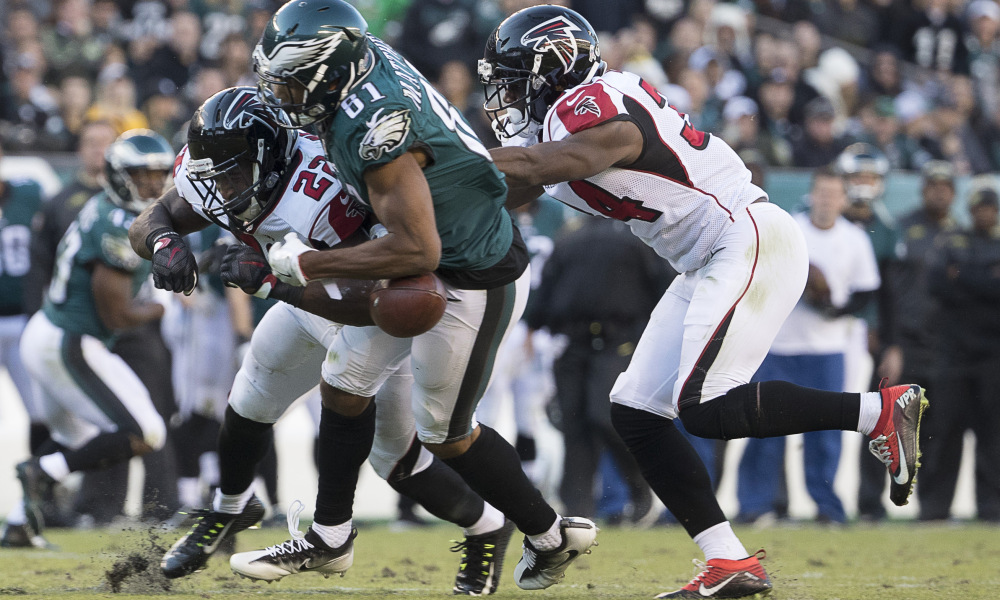 With a 24-15 victory over the Atlanta Falcons, the Philadelphia Eagles improved to 4-0 at home and 5-4 on the season. The Falcons entered the game with the leading receiver in the league, Julio Jones, and the leading passer, Matt Ryan, as well. However, they were no match for the Birds, who held the Falcons, leading the league with 33.9 points per game, to only 15 points. Even more impressive was the Eagles’ run defense, which allowed only 48 yards on the ground.
With the running game stagnant, the Eagles could afford to take chances and blitz the quarterback, which caused problems for the Falcons’ offense all day long. Defensively, Fletcher Cox and Mychal Kendricks had standout games. Cox pressured Matt Ryan six times in the out-of-conference affair, and Kendricks recorded three tackles, one pass defended, and one quarterback hit. Kendricks’ stats are were the more impressive because he had not played in three weeks.

Midway through the fourth quarter, the Birds had to look past two blatant missed penalties from the refs; the one controversial no-call was a helmet to helmet clash between Eagles’ receiver Jordan Matthews and Falcons’ safety Keanu Neal. The collision was so severe that Matthews’ face mask was bent as a result. Matthews spoke after the game about the missed call saying, “Yes, I definitely think it was a penalty. My face mask was bent, and I had to get a new one.” He went on to say that the victory was more important, and he doesn’t plan to dwell on the incident in the wake of a big win.

Dorial Green-Beckham saw the field on 44 plays but was not targeted once, possibly because he seemed to have trouble creating space between himself and the defenders. Meanwhile, 2015 First round pick Nelson Agholor played 72 plays on Sunday and was targeted only four times for came two meager receptions. Obviously, this team needs weapons for the young gunslinger Carson Wentz, and I think you will see some new faces at the receiver position come next season.

After being sidelined for a slew of reasons, including a sore tooth and recent fumbling issues, Ryan Mathews returned to his role as the Eagles’ primary running back. Mathews had 21 touches for 139 total yards and two touchdowns, which was the difference maker in Sunday’s victory. Expect the Eagles to stick with Mathews going forward and incorporate rookie Wendell Smallwood into the rotation as well.