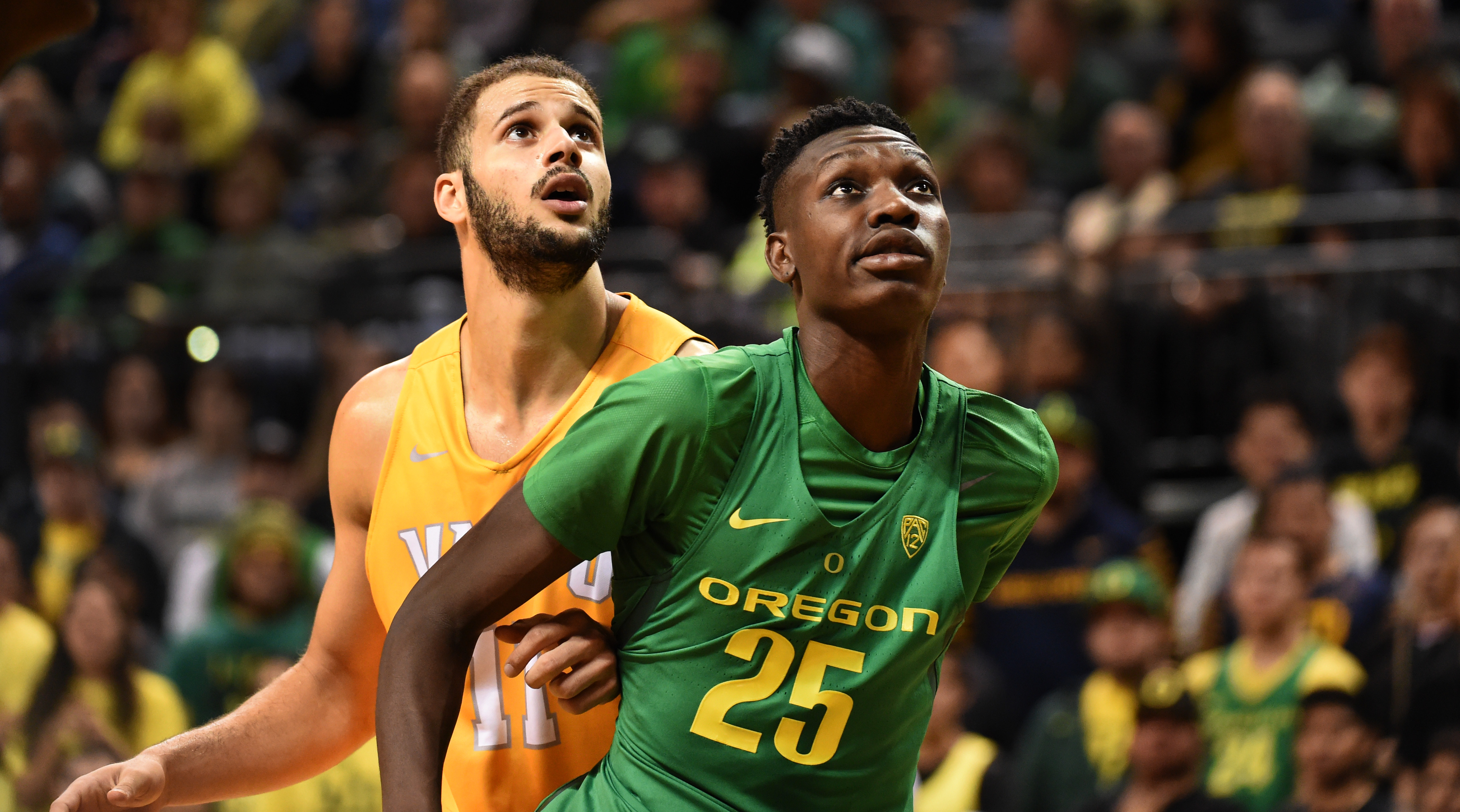 There were some doubts going in to this game after the listless effort against Baylor. The Ducks did not look anything like the #4 team in the country against the Bears and the Crusaders had pushed the Ducks to the limit last season.

EUGENE, OR – NOVEMBER 17: Chris Boucher #25 of the Oregon Ducks battles for position under the basket with Shane Hammink #11 of the Valparaiso Crusaders in the second half of the game at Matthew Knight Arena on November 17, 2016 in Eugene, Oregon. Oregon won the game 76-54. (Photo by Steve Dykes/Getty Images)

This one started off with Casey Benson going one of two at the free throw line.  Valpo took a 2-1 lead on their first trip down the court, but Tyler Dorsey responded with a 3, to make it 4-2. A 3 for Valpo had the score 5-4. Valpo’s biggest lead in the game was 14-10, their last lead came with 12:23 on the clock at 16-15, but the Ducks took control and never gave it up on a Chris Boucher layup that made it 17-16 Ducks.

Valpo played a zone against Oregon, but rather than the passive, early in the clock shooting that led to their downfall against Baylor; this time the Ducks were attacking the middle of the defense, cutting to the basket, setting screens. Boucher led the Ducks in scoring in the first half with 18 and the Ducks led, 37-30.

The always important opening five minutes of the 2nd half showed Oregon increasing its lead to 11. 47-36 on a layup by Jordan Bell, who’s improvement in shot making and ball handling can’t be overstated.  7-13 from the field, 7 rebounds, one assist, 3 blocks, and 0 turnovers. He did have 4 fouls, but did not let that impact his play. Boucher finished with a game high 25 points, 9-12 from the field; including, 3-5 on 3’s.  He also had 9 rebounds, 3 blocks and a steal.  Boucher several times had the ball in the middle of the court and handled it like a guard; his athleticism is something to behold as he gets to balls that appear to be completely out of reach.

The Ducks stayed on pace, but the defense stiffened and Valpo would shoot 7-30 in the second half, and the Ducks continued to play active on offense and put the game away. Payton Pritchard continued his solid play, scoring 9 points and handing out 5 assists. Keith Smith had his best showing of the season, logging 15 minutes, 4 points on 2-2 shooting on nice moves inside, he also dished out 3 assists and had only one turnover. Tyler Dorsey hasn’t found his shot yet this season,, going 2-9 from the field. But, along with his 8 points, he had 3 rebounds and 3 assists and 0 turnovers. Kavell Bigby-Williams is getting better, seeming surer of himself on the floor.

Baylor looks like a team that will have a nice season. It’s hard to say just how good Valparaiso will be; athletically they didn’t belong on the court with Oregon and could not dictate the action in any way. The Ducks needed to have a game like the one they had against Valparaiso to keep their spirits up before heading off to Hawaii to take on Georgetown in the first round game of the Maui Classic on Monday.