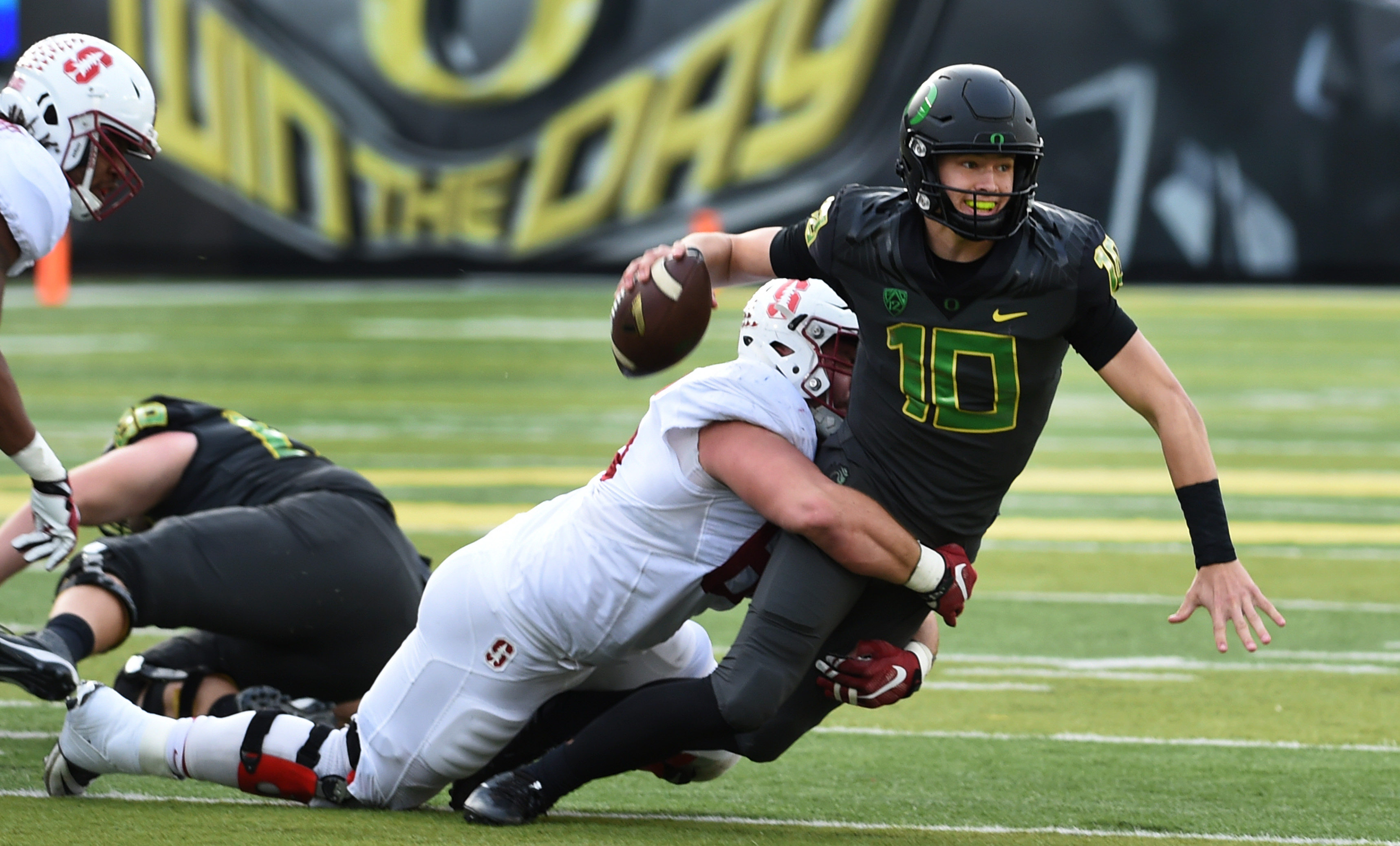 Constant pressure has forced Justin Herbert to throw the ball from some awkward positions in his freshman season. This Saturday he faces Utah and their physical defense, which ranks 5th in the country in sacks. (Photo by Steve Dykes/Getty Images)

Oregon travels to Utah this weekend for a matchup with the Utes. Kickoff is scheduled for 2:00 pm ET at Rice-Eccles Stadium, and the game will be aired on the Pac-12 Network. This is a tough test for a Ducks team that has been a major disappointment this year. Fans that have been used to watching their team compete for national championships in recent years have been forced to watch the Ducks flounder their way to a 3-6 record this year, including a horrendous 1-6 mark in Pac-12 play.

A Look at Utah

It won’t get any easier for Oregon this weekend against Utah. The Utes are 14.5-point favorites according to the oddsmakers. They are 8-2 on the year with a 5-2 record in conference play. Utah is ranked 11th in the AP poll. They are extremely tough at home, which spells trouble for an Oregon team that has yet to win a game on the road this year. The Utes need to win out if they want a chance to play in a New Year’s Bowl game.

Williams is one of the best running backs in the Pac-12. In the Utes’ last game against Arizona State, Williams had a field day. The Utah running back ran for 181 yards on just 15 carries and found the end zone twice against the Sun Devils. That could mean big trouble for an Oregon defense that is giving up an average of 243 rushing yards per game. The Ducks defense will have to key in on Williams if they want to have a chance to win. They need to crowd the box and make Utah try to beat them with the passing game.

While Williams is a stud for Utah, Oregon has a few good running backs of their own. Freeman and Brooks-James form a potent one-two punch in the Ducks’ ground game. Freeman is the running back who gets the bulk of the carries, but Brooks-James is a very shifty runner who is a threat catching the ball out of the backfield. If these two can have big games against the stout Utah run defense, the Ducks just may have a chance to pull off the upset.

Oregon Defense vs. Third Down

Perhaps the worst of many problems for the Oregon defense this year is that they cannot seem to get off the field on third down. There are allowing opponents to get first downs on 48.2 percent of their third-down opportunities. That ranks them 121st in the country in the category, which is just eight spots from dead last.

Oregon will have to show a lot more on defense in this one than they have so far this year. If the defense can step up and the offense can avoid turnovers, the Ducks have a chance. If not, the game could turn ugly.