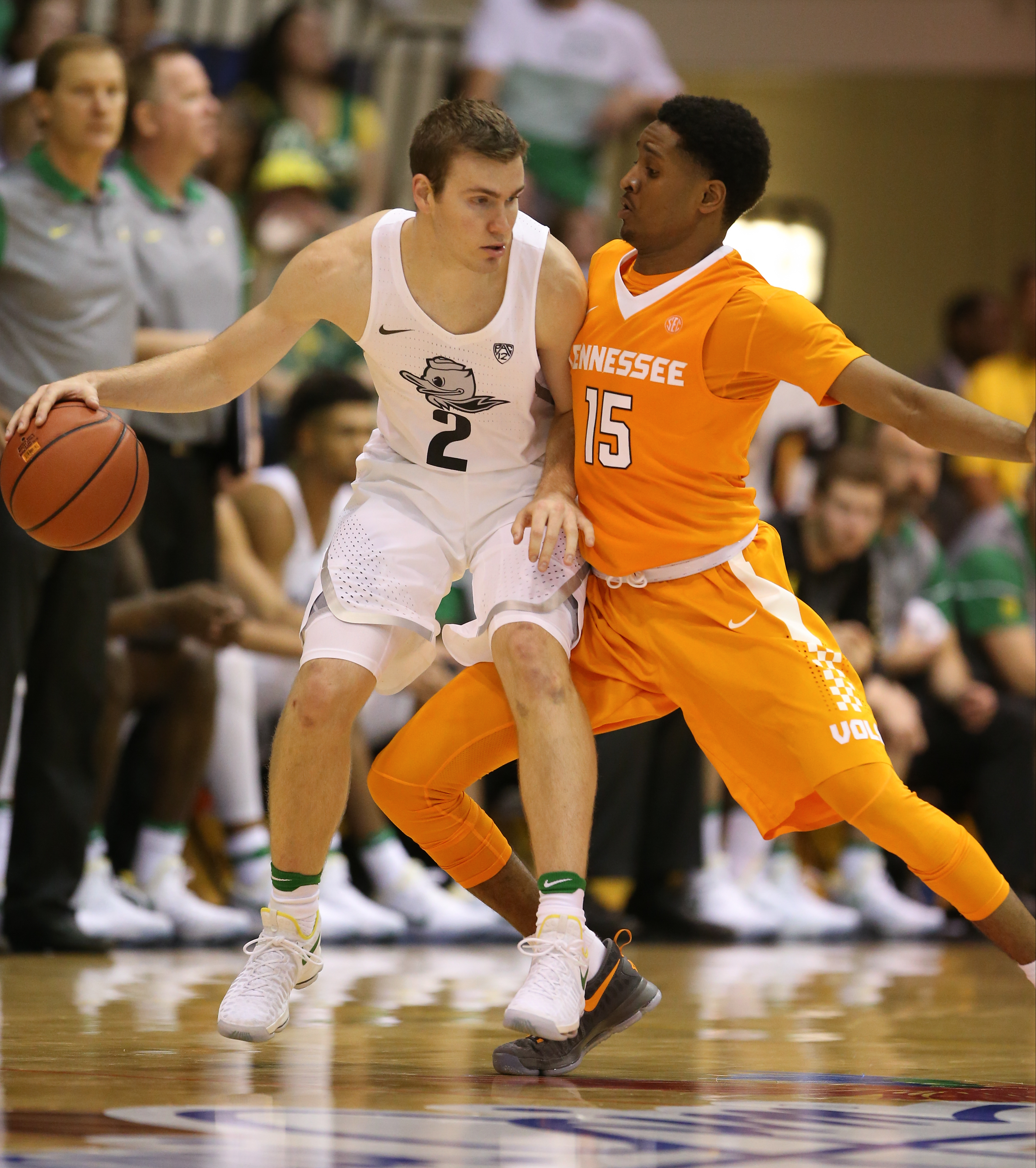 LAHAINA, HI – NOVEMBER 22: Detrick Mostella #15 of the Tennessee Volunteers defends Casey Benson #2 of the Oregon Ducks during the second half of the Maui Invitational NCAA college basketball game at the Lahaina Civic Center on November 22, 2016 in Lahaina, Hawaii. Oregon won the game 69-65. (Photo by Darryl Oumi/Getty Images)

Facing a must win situation to keep this season from turning into a mess the Ducks came out the victors in a messy, mistake filled overtime game played in the early morning in Hawaii. Bill Walton was courtside once again, but most of the raucous crowd from last night apparently chose sleeping in rather than attending the opening game in the loser’s bracket.

A different starting five for the Ducks, with Payton Pritchard replacing Casey Benson got started fast, and a layup by Chris Boucher had the Ducks ahead, 9-1.  Tennessee knotted it at 9, and took the lead, 17-15.  John Fulkerson pushed the Volunteers to their largest lead, 31-23, with 2:40 left in the half.  Benson was out of the starting lineup, but he was a key figure in the Ducks getting the win, starting with a 3 to cut the lead to 5. Three straight free throws by Jordan Bell pulled the Ducks to 32-29, and after a Tennessee turnover, Benson found Dillon Brooks open for a 3 that tied the score at 32.

Tracking the scoring droughts for both teams kept the statisticians busy; Fulkerson’s layup to give the Volunteers the lead at 31-23 was their last field goal of the half, he would make a free throw to get them to 32. It would be at the 13; 28 mark of the second half before a jumper by Kwe Parker got the Volunteers to 34. In the meantime, much like yesterday against Georgetown, the Ducks started fast in the 2nd half; a Tyler Dorsey layup pushed the lead out to 11, 47-36. Remember though I said scoring droughts for both teams. Dorsey got the layup with 9: 27 to play in regulation; The Ducks would score 9 points the rest of the half, all on free throws, and it was overtime, 56-56.

Detrick Mostella, off the bench for Tennessee finished as the game’s high scorer with 22,; 18 in the first half, and he didn’t attempt a shot or go to the free throw line in OT.  Benson shined in the overtime for the Ducks; assisting to Dorsey for the first two for the Ducks, then driving the lane, getting fouled and hitting a free throw to push the Ducks out in front, 61-58. Later, two more at the line by Benson kept the Ducks in front, 65-63.  Dillon Brooks had a chance to win the game for the Ducks in regulation, but his mid range jumper was short; but with the score tied at 65, Brooks nailed a 3 to put the Ducks in front, 68-65.  Tennessee forced up a three on their end, Brooks collected the rebound, and nailed the victory with his first free throw. Brooks ended up with 17 points to lead the Ducks, Boucher joined him double figures with 11.

The addition of Brooks in the game makes a major difference for the Ducks; not only his individual skills, but how his presence gives the team a direction and focus it sorely lacks with him on the bench. Far too much time is spent passing the ball around the perimeter without him. The Ducks are unsure of themselves offensively, Bell is better at the low post, but so far is not a viable scoring option; Boucher can get his 3’s, but they aren’t as easy when his defender can go out with him. The move to switch Pritchard and Benson worked this time and I think it is a move that should be duplicated next time. Tyler Dorsey is still playing well overall, but hasn’t found his shooting stroke yet.