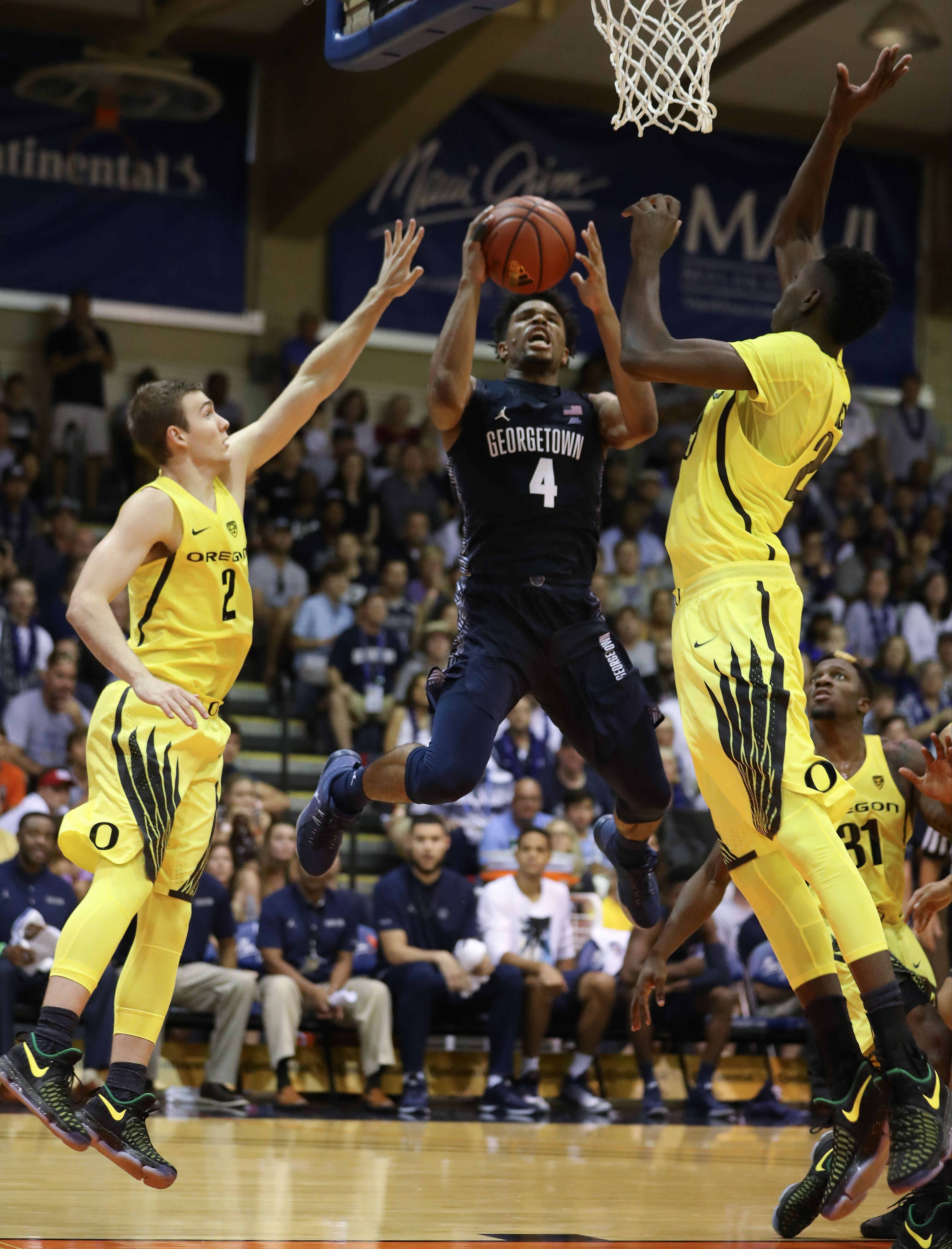 LAHAINA, HI – NOVEMBER 21: Jagan Mosely #4 of the Georgetown Hoyas  drives to the basket during the second half of the Maui Invitational NCAA college basketball game against the Oregon Ducks at the Lahaina Civic Center on November 21, 2016 in Lahaina, Hawaii. (Photo by Darryl Oumi/Getty Images)

Georgetown came in to this game fresh off a loss at home to Arkansas State, the Ducks, after being skewered by Baylor, laid a thumping on Valparaiso, and looked to be ready to get down to business. Instead, that first half of basketball against the Hoyas has to be the worst I’ve seen in a very long time.  For starters, try going 1-9 to open the game. At the time, Georgetown wasn’t playing great, and only led, 9-4. , the 4 points being 1-2 on the free throw line by Boucher and a 3 pointer by Payton Pritchard. It keeps going like that, and its 20-15, Georgetown with 5:22 left in the half. As bad as the Ducks have been playing, it hasn’t gotten completely out of hand. But, no; for the last 5 minutes of the half, the Hoyas outscored the Ducks, 18-6 for a 38-21 lead.

I just finished watching the highlights of the Utah football game before the second half started and whadda you know; the Ducks came charging out of the gate and after those crucial first five minutes of halves, Oregon had outscored Georgetown, 9-2, cutting the lead to 40-30. How about 42-39 on a layup by Dillon Brooks, seeing his first action of the season? Brooks gets an assist from Brooks next time and its 42-41, and when Brooks finds room inside again, the Ducks have the lead, 43-42.  A 22, more points than the scored in the first half, to 5, run gives the Ducks the lead, 43-42. Unfortunately, it would last 21 seconds. Georgetown took the lead back, 44-43.  The furious comeback was impressive; but it just made the first half even more of a disappointment. Oregon finished shooting 23-59, 38%. Georgetown, 34%, 21-61. The Ducks won the battle of the boards, 46-40. Ultimately, Georgetown won the game at the free throw line, Hoyas; 17-22, 73%, Ducks; 11-20, 55%, included of course misses on the first of a one and one.  A reasonable percentage at the free throw line; some semblance of life in the first half; and the Ducks win this game.

Payton Pritchard finished with a team high 18 points; 7-14 shooting, 3-8 from behind the line. He doesn’t display any freshman anxiety, can get to the basket, handles the ball well, and plays good, smart defense. Boucher finished with 13 rebounds and had 5 blocks to go with 7 points. During the run to start the second half he was huge. Jordan Bell, 9 points, 7 rebounds, 3 blocks. Tyler Dorsey’s shooting woes continue; 1-7, 0-2 on 3’s, and 5 turnovers. It was great to see Brooks back on the court; he had his moments, and it’s obvious how much the Ducks need him if they want to reach the expectations that have been set this season.  Next game: Tennesssee, 10:30 AM, Tuesday.