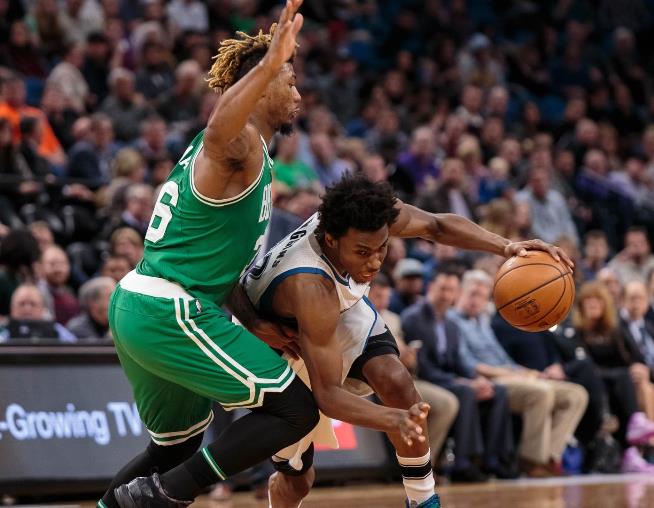 And after the third quarter Monday night against the young Minnesota Timberwolves, it was necessary. The Celtics trailed by 13 points, were getting pounded on the boards, and “punked” in the paint, according to guard Isaiah Thomas.

So Smart chided his team after the third period, challenging their desire and toughness.

“Everybody was [ticked] off how we were playing the whole game,” Smart said. “We were getting as we liked to call it, ‘punked.’ We saw that and everybody had something to say about it and we had to change it. Everybody agreed that we weren’t playing to the caliber that we usually play.”

I wish CSNNE broadcasted Smart’s speech because it might have prevented me from sleeping through most of the 4th quarter.

Can you blame me? The 2nd and 3rd quarters were a total sh*t-show.

The Wolves had 50 points in the paint. Karl (I think it’s time to drop the Anthony) Towns reminded Celtics fans just how dominant a young, franchise big-man can be. Gorgui Deng morphed into Bill Russell thanks to the yogurt soft defense of Tyler Zeller and Kelly Olynyk. Mind you, all this was happening as Andrew Wiggins (14 pts, 5-18 FG) was missing-in-action.

A lot of players try to inspire their teammates with fiery words. Often times, it falls. In Smart’s case, it worked. How can you not listen to a guy so fearless and tough he risked breaking his face for an offensive rebound in Detroit?

The Celtics choked out the Wolves in the 4th quarter. It was nice to see the emergence of that top 5 defense everyone was expecting. It also helped that the Wolves were gassed – all 5 starters played at least 38 minutes (never change, Thibs).

On Page 2, Jae Crowder’s ankle is not ok.

Crowder, who had four points in Boston’s 99-93 win over the Timberwolves, was only able to play 24 minutes before the pain in his ankle proved to be too much for him to keep playing.

“I just didn’t have nothing,” Crowder told reporters after the win. “My ankles felt they locked up on me, never got loose. I took it upon myself to pull myself.”

“It’s very frustrating but it’s a process,” Crowder said. “The first half I felt great, probably the best I felt. It’s a process.”

Damn. So much for being healthy.

Let’s hope this ‘locked up’ feeling is nothing some massage and e-stimulation can’t solve.

And finally, evidence that Al Horford is this team’s MVP.

The Celtics are now 2-0 since Horford returned after missing nine games due to a concussion. Boston is 4-1 when Horford has played this season, 4-5 when he’s been out. And that’s not a coincidence.

Horford’s basic stat line doesn’t leap off the page: He’s averaging 14.8 points, 6.6 rebounds, 4.8 assists, and 2.6 blocks over 31.6 minutes per game. Those who don’t pay attention to the details will wonder if Boston overpaid for that sort of production after giving Horford four years and $113 million this past summer.

I never realized that Al was such a good ball handler. There was a play in the first half where he blocked a shot, corralled the loose ball and dribbled down the court. Amazing.

The Indians have 11 players hitting arbitration this year, but while the Indians are generally looking to extend players once they hit their arbitration eligible...