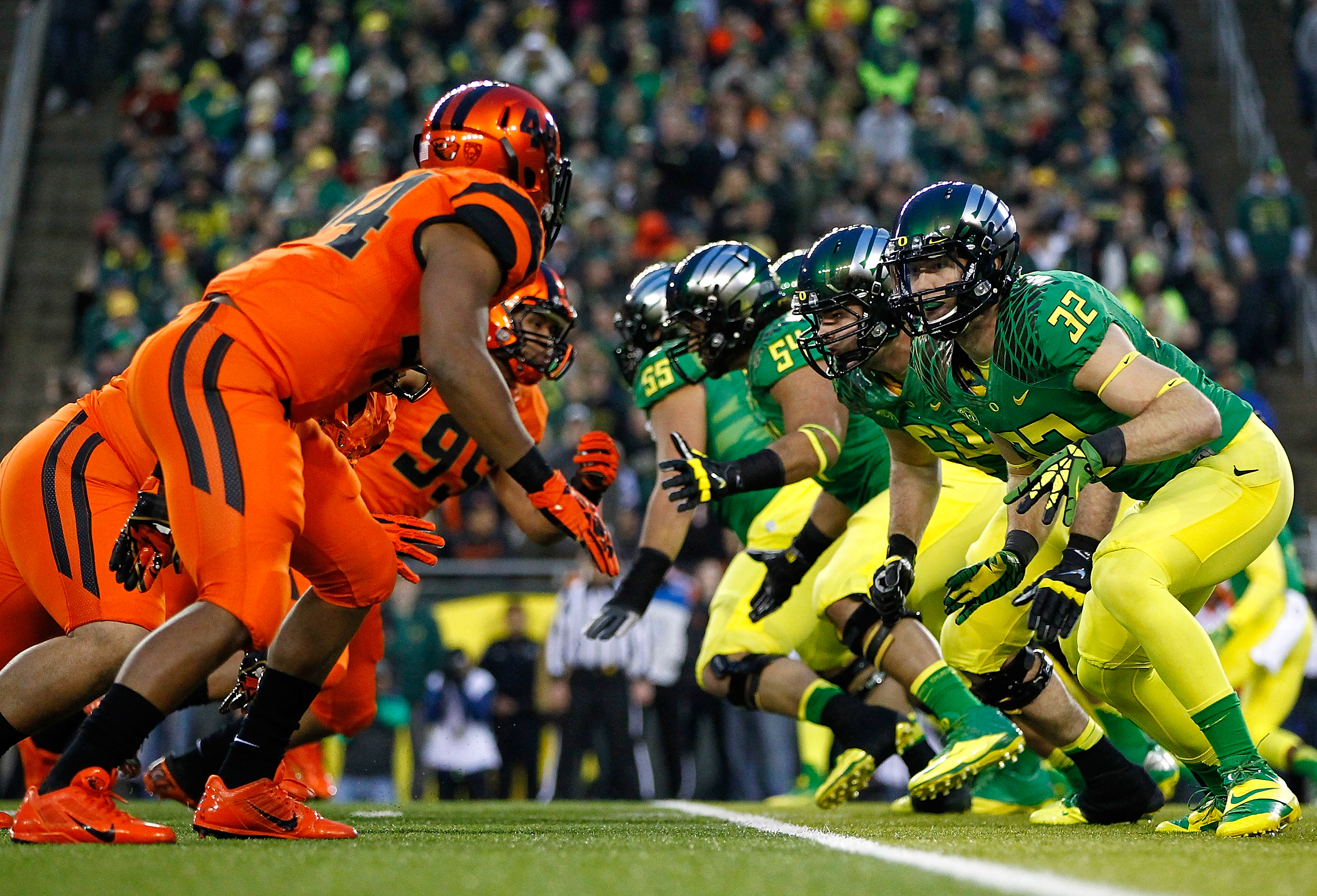 The Civil War has been played for bigger stakes, but only rarely has it doubled as a job review for one of the coaches. (Photo by Jonathan Ferrey/Getty Images)

College football is all about traditions, and this matchup is no exception. This Saturday, Oregon will travel to Corvallis and face Oregon State for the 120th time in a rivalry that is now known as the Civil War.

The Ducks have dominated this rivalry with a 63-46-10 record in the series, and has won the last eight times these teams played. A pure record comparison could create the false impression that Oregon State could break that streak in an evenly matched game with both teams below .500, but Oregon is better than their 4-7 record indicates, having suffered three one score losses to quality opponents so far this year.

Despite their abysmal records, both teams are coming off a win for the first time in seven years, with the Beavers topping the lowly Arizona Wildcats, while the Ducks managed to pull a thrilling late win against 11th ranked Utah last week. Both teams will feel like they have momentum, which means neither one does.

If this game turns into an offensive battle, the edge undeniably goes to Oregon. Their offense ranks in the top 30 for all of FBS across several categories. Their real strength is the run game- Oregon has averaged 231.5 rushing yards per game, just over the 222.3 rushing yards Oregon State gives up. As good as hometown hero Ducks QB Justin Herbert (born in Eugene, Oregon) has been, expect a heavy dose of ground game this week. It’ll silence the crowd and wear down the weak Beavers defense. As long as Royce Freeman doesn’t get hurt again, he should easily break 100 yards for the third week in a row, and Tony Brooks-James could see some carries as well.

No matter what the result, this game will have more impact on the Ducks than the Beavers. A win would put them at 5-7, which looks a lot better when you consider the close calls against Nebraska and Colorado, both of whom are currently 9-2. There are rumblings about Mark Helfrich’s job being on the line, and while last week’s win against the highly ranked Utes will help, winning the Civil War would clinch Helfrich’s safety for another year. Without this win, boosters may want a change, regardless of how effective it might actually be.

WiIt may not mean much to the nation, but this game means everything to these two teams. It’s a true rivalry.