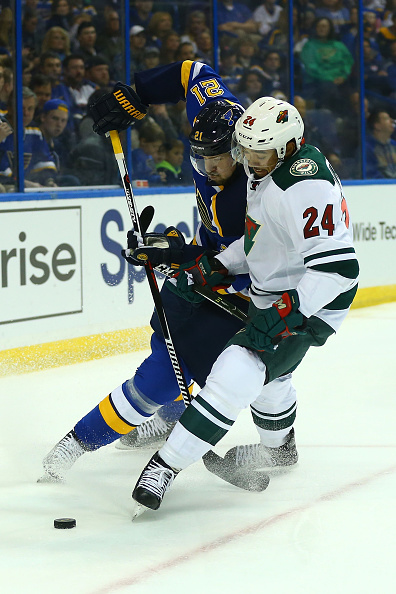 The Wild surprised just about everyone, especially the Pittsburgh Penguins by lighting the lamp six times against the defending Stanley Cup champions.  It was a welcome change for the offensively-challenged team and Wild head coach Bruce Boudreau noted that it was nice change of pace to score more than 2 goals.  St. Louis is another team that is known for its relatively stingy play defensively and they too at times struggle to score.  The Blues stand in front of the Wild in the Central Conference standings and if Minnesota doesn’t want to scratch its way in via a wildcard spot, leapfrogging St. Louis would be one way to do it.

St. Louis has been resting the last few days and hopefully they loaded up on mashed potatoes and turkey.  The Wild avoided being sluggish after its day off, and now they must dig deep against the Blues on the road where they’ve typically struggled.  Can the Wild earn a win in back-to-back games?

1st Period Thoughts:  The period had the physical tone of what you’d expect in a game against the Blues.  The Blues more or less had their way with the Wild, whom they overpowered in nearly every collision but Minnesota kept moving the puck quickly and played smart, patient hockey.  The first few minutes made you wonder a bit as both clubs were exchanging scoring chances with one another in a way that was reminiscent of their game against Dallas.  Devan Dubnyk was very sharp, absorbing pucks and seeing the puck well through traffic.  Minnesota was playing more of a counter punching style as the Blues tried throwing bodies at the Wild, waiting for open windows to attack and take the puck to the net.  At times that meant paying the price to hold the zone and work pucks deep and at others it was simply crashing the net and sending pucks towards the crease and hoping for a lucky bounce.  I thought Minnesota’s defenseman were doing a good job of showing poise in the midst of all the blue jerseys flying at them and then making a good first pass to start the breakout.  St. Louis nearly scored as Ryan Reaves batted a puck out of the air but it missed just wide.  A few minutes later it was Robby Fabbri who thought he had a step on Jonas Brodin who in two or three strides stayed in front of him and contested his wrist shot that was gloved by Dubnyk.  Minnesota’s patience would be rewarded as Jason Zucker worked the puck deep behind the Blues’ goal and he’d send one out into the slot where Mikko Koivu fired a wrist shot by Jake Allen.  1-0 Wild.  The Blues would force a penalty as Ty Rattie got cross checked by Marco Scandella.  On the power play the Blues moved the puck pretty well but Minnesota was perhaps a bit fortunate that St. Louis was off target on their shots as they repeatedly set up Alex Pietrangelo from the point.  The Wild would get a big kill and they’d go back on the attack and came close to adding to their lead as Eric Staal found Charlie Coyle with a pass and as he made a power move towards the ogal he ran out of space before he could pull the trigger and Allen was able to poke check the puck away.  Minnesota was outshot 16-9 but the Wild were at least funneling pucks towards the goal and not just sitting back and playing rope-a-dope.  Another player was amazingly poised was Jonas Brodin who stonewalled two 2-on-1’s by himself in the period.

2nd Period Thoughts:  There were moments where the Wild were definitely on their heels, chasing the Blues around their zone.  Dubnyk had to make some big saves, but he got some help at times too as Jason Pominville dove back to sweep away a puck that seemed destined for a yawning Wild net.  It was this kind of effort that personified the team’s will to win.  The Blues would tie the game a few minutes in after Charlie Coyle failed to clear the zone which led to a a chance for Paul Stastny from the slot where he beat Dubnyk top corner.  Stastny would have another great chance from in close a few minutes after that but Dubnyk stoned him.  After a few tense minutes the Wild would answer back and it was the extra effort that made all of the difference.  It started out with Nino Niederreiter who made a nice sharp turn to gain some time and space and he’d send a puck towards the goal that was swept up by Pominville who then swung the puck on goal that went off the pads of Allen right to a crashing Erik Haula who went top shelf to put the Wild ahead 2-1.  It was a huge response goal that helped deflate the home crowd and put Minnesota back in control.  The Blues seemed a bit exasperated as they went into the intermission trailing by one to a team they were outshooting 28-20.

3rd Period Thoughts:  The wheels would fall off in the 3rd period, and it didn’t take very long.  The Blues would tie the game off a shot from the point by David Perron that was redirected by Jaden Schwartz.  Dubnyk had no chance to stop it.  A few minutes later, Perron would draw a tripping call on Scandella.  On the power play the Blues would add to their lead as Colton Parayko‘s shot from the point was kicked out into the slot by Dubnyk who had lots of traffic near his crease and it was Schwartz pouncing on the rebound for the go-ahead goal, 3-2 St. Louis.  Dubnyk thought he was interfered with and the Wild bench would check it out and decide to challenge.  The replay would show Ryan Suter pushing Dmitri Jaskin into Dubnyk which does not constitute goaltender interference and the officials agreed and Schwartz’s go-ahead goal would stand.  Minnesota would try to mount a counter attack in the next few minutes after they took the lead but Minnesota just couldn’t pounce on the rebounds Allen was giving up.  Then the Wild would ease up and seemed to decide to bide their time before making one last great push.  Minnesota would pull Devan Dubnyk with almost two minutes left in the game, and the extra attacker would pay off as Staal managed to set up Coyle for a quick shot and goal sending the game to overtime knotted at 3 goals apiece.

Overtime Thoughts:  The Wild would go with a slower lineup in its first two shifts in overtime.  That nearly turned into disaster as the Blues quickly worked a 2-on-1 where Paul Stastny nearly won it but Dubnyk got just enough of the shot.  Minnesota would finally put some faster players out on the ice and not to any Wild fans’ surprise they were able to use their speed to create some scoring chances as Erik Haula nearly connected on a wrap around bid.  But that is as close as it would get and the game would go to a shootout.  Dubnyk and Allen would both stop 3 shooters but Perron would beat Dubnyk and Allen would dismiss Granlund to give the Blues a 4-3 shootout victory.

The two teams battled throughout most of the 1st period without much in the way of scoring chances to show for it.  Alex Stalock was solid, seeing the puck well through traffic as he made his 3rd consecutive start.  The Checkers would break the stalemate late in the period as Clark Bishop buried a pass by Levko Koper with just 45 seconds left in the 1st.  Charlotte would add to its lead a few minutes into the 2nd as Valentin Zykov sniped a shot by Stalock to make it 2-0.  Iowa would regroup and the power play would spark a bit of a rally as Jordan Schroeder found Teemu Pulkkinen for a one-timer that beat Alex Nedeljkovic cutting the Checkers’ lead in half.  Iowa would tie the game late in the period as Hunter Warner‘s wrist shot found the twine behind Nedeljkovic.  In the 3rd period, the Wild seemed content to defend rather than to attack and the game would go to overtime.  Just 90 seconds in, the Checkers would strike in OT as Jake Chelios raced in a breakaway and beat Stalock for the game winner.  Stalock had 44 saves in the loss.

G – Ales Stezka (Chicago, USHL) ~ Chicago is fortunate to have two pretty good goaltenders and Stezka has had to battle for starts.  On Friday he got the start against Lincoln and had 30 saves in the Steel’s 5-4 win.  The Liberec, Czech Republic-native has a 6-2 record, 2.10 goals against average and a .925% save percentage with 3 shutouts. 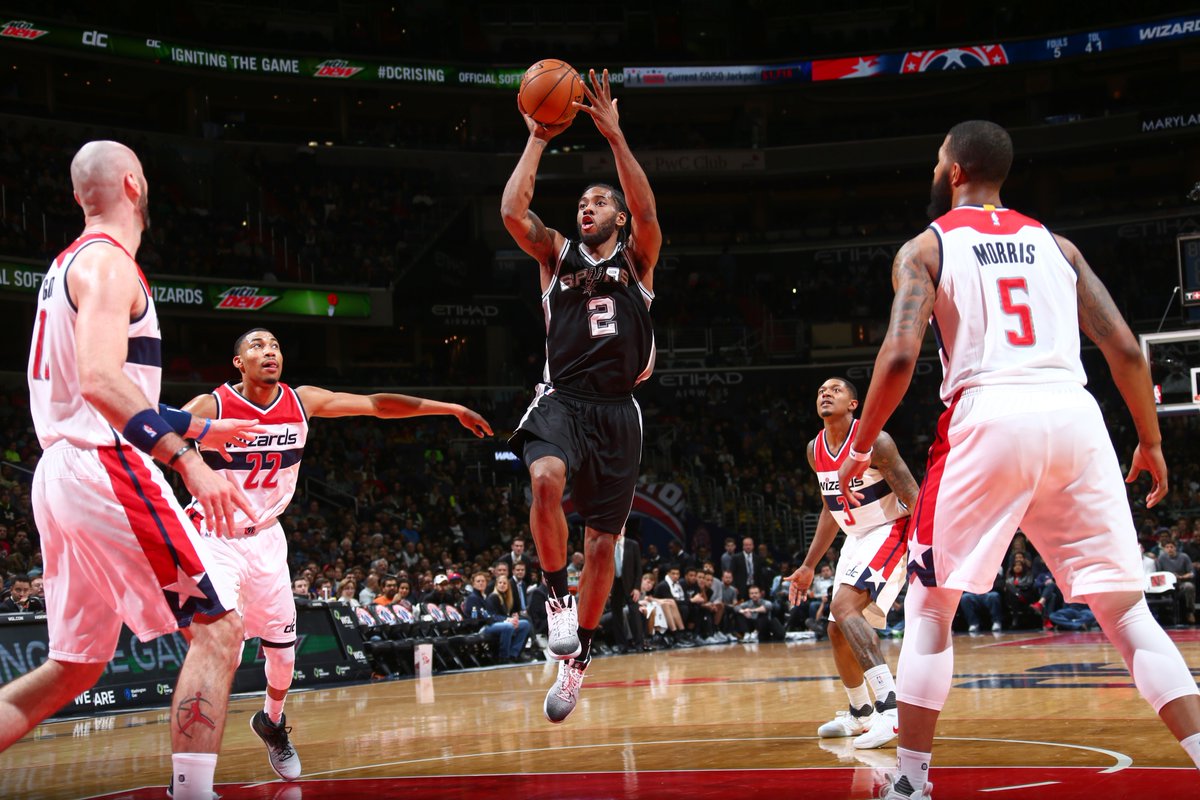 Highlights: https://www.youtube.com/watch?v=q33BfxevAn4 The San Antonio Spurs knew their three game East coast trip would not be easy. Down to the final game it was anything...