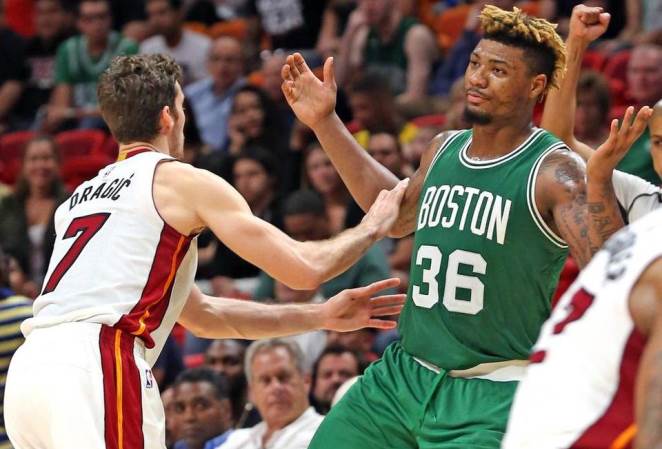 Smart, attempting to stop a Whiteside dunk, had flown over the top of the 7-footer. Due to the hard nature of the foul, Smart was given a Flagrant 1 foul.

Not only did Smart have to be pulled away from Whiteside, almost a minute later he received a technical foul after exchanging shoves with Goran Dragic, who had intentionally fouled him at midcourt. Smart pushed Dragic just before the whistle blew.

Postgame, Smart declined to talk to reporters, but he did answer a question on TV from CSN as to why he was the only one to receive a technical foul. He was also agitated when the Heat started to intentionally foul him early, with the first Hack-a-Smart coming with 2:40 to play.

“I’m just looking around like, ‘What am I doing?’ I’m not saying anything to the officials,” Smart told CSN. “But we’re playing hard. I’m not making free throws and I usually make them. It’s a mix of everything. . . . I just play my game. I can’t control how they feel or what’s going on with their side. I just control what I do.”

Quick note on that “flagrant 1” which was total bogus. CSNNE had a great replay from under the basket which clearly showed – that even though Marcus came flying in like a madman – he made minimal contact with Whiteside (who grabbed Smart while falling to the court). Yet for some reason, the replay center did not make that angle available to the game officials. But I digress…

Marcus Smart is a wonderful agitator. Watch him play defense off the ball. He’s physical and he’s relentless. Rarely do agitators have both assets. Scalabrine was talking about this during the game.

I’m going to state the obvious here and say it’s critical that Marcus keep his cool. In fact, it’s the whole point of agitating. Frustrate the other guy to the point he loses it.

We’re starting to notice that despite below average shooting, Smart can impact games. But I think the lack of foul calls and poor outside shooting is starting to wear on the young man, (Mass Live):

More importantly than a few missed free throws early in the season, Smart is earning fewer trips to the line than he did last year. For a team that hardly ever reaches the line except for Isaiah Thomas, it would have been nice to see Smart trending in the opposite direction. According to NBA.com, he has dipped from 3.6 attempts per 36 minutes to 2.4 tries per 36 minutes. Even with more ball-handling responsibilities, he has not figured out how to use his big, strong body to draw contact.

Maybe that will come as Smart continues to develop his off-the-dribble game. His passing has grown into a real plus and his defense has always been menacing, but his outside shooting still has not emerged from the hideousness of seasons past. At 44.4 percent true shooting, he’s actually on pace for the least efficient scoring of his career. According to Basketball-Reference.com, his numbers also put him on pace to become just the ninth player since 1980 to average at least 10 field goal attempts per game with true shooting of 45 percent or worse. You don’t need me to point out that is not at all good.

Smart is getting more calls, at least on the defensive end. The calls on the other end will come. As an old wise creature once said, patience you must have.

On Page 2, what happened to the Celtics fast break?

Last season, 15.4 percent of the Celtics’ points came on fast breaks, the sixth highest mark in the league. Entering their game Monday against the Heat, just 10.8 percent of their points had come on breaks, ranking 23d. And that figure will only plummet after their 112-104 win in which they had just 5 fast-break points.

Not only are the Celtics running less, they are not capitalizing often when they do push the pace. Boston’s 47.4 percent score frequency on fast breaks ranks 23rd in the league, too.

“If you look at our offensive numbers right now, the only area I’m concerned about is that we’re not converting in transition,” Celtics coach Brad Stevens said. “When we’re in the halfcourt, we’ve been OK and we’re shooting it fine, all those types of things. We’ll see what it all looks like after 80 games, but the transition efficiency is not very good.”

The Celtics are too small and quick not to be running.  Somebody get Tommy to run the next practice. I’m sure he has some old school drills that will get the boys running.

And finally, Anna Horford says what’s on the minds of all Celtics fans. 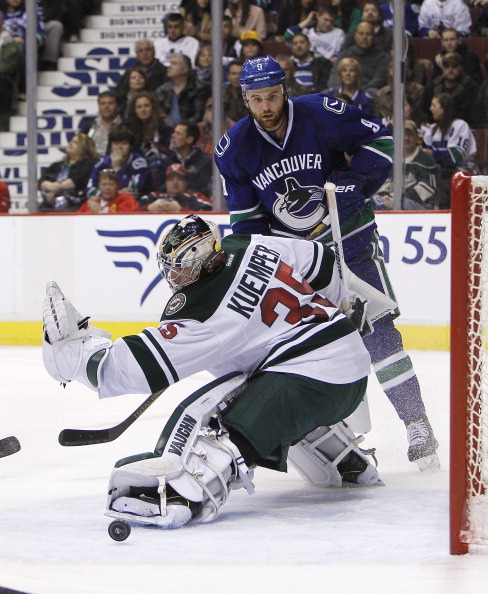