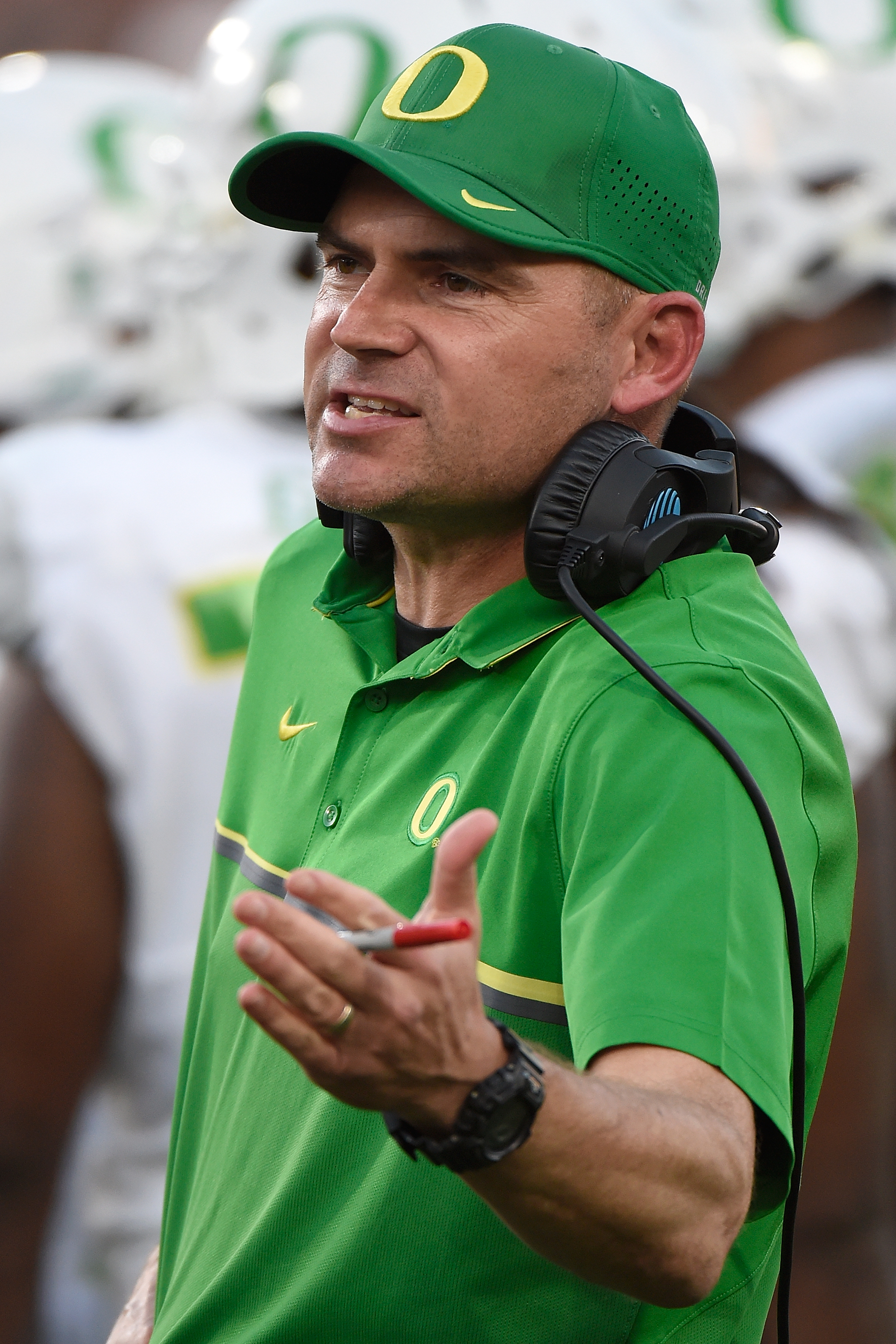 How many times in Mark Helfrich’s Oregon career did you feel the Ducks had the best head coach on the field? (Photo by Lisa Blumenfeld/Getty Images)

Mark Helfrich was a good man. He was smart and sincere. He worked hard. He conducted himself in an honorable way. He cared.

At the beginning he called Oregon his dream job. His father went to Oregon. His wife went there. He grew in Coos Bay, where Oregon track great Steve Prefontaine is a legend and all-time Duck hero.

Like Oregon’s two previous head coaches he was hired from within, promoted from offensive coordinator just as Chip Kelly and Mike Bellotti were.

This time the long-standing tradition of continuity failed completely.

Like Bill Doba at Washington State, Jim Lambright at UW,  and Larry Coker at Miami, Helfrich had some initial success but the trend of the program and the strength of the culture and process deteriorated rapidly under his watch.

It wasn’t just that the Ducks fell to 4-8, their worst record since 1991. It was the way they lost, the way they looked doing it, and the lack of effort and discipline they displayed, on and off the field.

This team lost to the Huskies by 7 touchdowns. They were steamrolled by USC and Stanford. Oregon State overcame a 10-point deficit late in the 3rd quarter, finished the game running the football 23 straight times, and beat the Ducks by ten in their first Civil War victory since 2007.

These Ducks had no fight, no consistency. They lacked cohesion and concentration. They used poor technique. They were sloppy and undisciplined, one of the most penalized teams in the country. At times, they played like they didn’t care. Others, they played like they didn’t understand basic concepts of the game. In two straight games late in the season they handed the opponent an easy touchdown by failing to successfully field a punt. Against Stanford one of the blockers ran into the returner. At Utah a promising freshman who hadn’t been trained in the basics of handling a rugby style kick misplayed a bouncing football into a bizarre touchdown. Utah has had a rugby style kicker for 4 years. It’s a critical and specific technique returning them. Like many Oregon players in many crucial situations, he looked confused. He hadn’t been taught how to play that part of the game.

Part of the collapse is explainable, some of it even understandable.

The Ducks had four freshmen linemen who were just learning the game, paired with a hot-headed senior offensive lineman who couldn’t stop committing stupid drive-killing penalties. They were decimated by injuries, particularly in the defensive front seven. They were young, with a promising freshman quarterback. The two best players on defense were true freshmen also.

But none of that excuses the fact that Helfrich inherited a Ferrari and in four years the Ducks are a dented and sputtering Pinto in need of a ring job and a new passenger side door.

After leading in the conference in rushing for 10 straight years, the Ducks finished 6th this year.

For the third year in a row the defense ranks near the bottom of the BCS.

Last night Athletic Director Rob Mullens made the decision to change leadership in the football program. He handled this announcement in a distasteful and cowardly way. It should have happened Saturday night or Sunday morning. The coaching staff, particularly Gary Campbell, Jim Radcliffe, Steve Greatwood and Don Pellum, all of the them with 30 years or more at Oregon, deserved much better than several days in limbo status, making recruiting visits and attending the team banquet not knowing whether they had jobs or not.

Mullens is a bean-counter and a douche with virtually no people skills. He likes to stay behind the scenes, and it’s a blessing if he continues to do so. Duck fans don’t want him at the podium anymore often than necessary.

It is encouraging that one of his last major decisions was hiring a new basketball coach. He succeeded marvelously in obtaining Dana Altman, who’s building a dynasty at Matt Knight Arena.

Now the AD and his search firm has to find a coach who can outscheme Mike Leach, out-discipline Chris Petersen, outsmart David Shaw, out-tough Gary Anderson, and out-whine Sonny Dykes.

There are a handful of dynamic, difference-making, culture-changing coaches in the country, only a few the caliber of Urban Meyer, Nick Saban and Jim Harbaugh. Even high-quality coaches like Gary Patterson of TCU and Mark Dantonio of Michigan State suffered down years this year.

What happened at Oregon went well beyond a down year, particularly since the program wasn’t doing things the right way off the field either. In one short stretch in November the Ducks had a player busted for possession of meth, while another punched a woman in the face at Taylor’s Bar, while a third player was pushing a student down in the parking lot and broke that student’s arm.

There was a void of leadership within the locker room after players like Bralon Addison, Tyler Johnstone and DeForest Buckner left. It didn’t help that Devon Allen and Tyrell Crosby were lost for the year in September. Many of the upper classmen on this year’s team were either quiet guys who led only by example, or self-absorbed guys who contributed little to team goals, individuals who played primarily for themselves or their own ambitions.

No one emerged. No one stepped into the void.

Provided Mulllens’ search team works quickly, next season looks very promising for a rebound. The Ducks have Nebraska at home next year, and the Huskers lose senior quarterback Tommy Armstrong and a host of their best players. In conference play, they rotate out two of the winningest teams in the conference in Colorado and USC, exchanging them for Arizona and UCLA, both bottom feeders this year. That’s a significant break.

It’s not realistic to expect Oregon to win 10-11 games every year, but with all that’s been invested in the program, the facilities, the tradition and the accomplishments, it IS realistic to expect them to compete for a conference title. To put a good product on the field and put out a good effort. To play the game the right way, know their assignments and improve from week to week.

It’s right to expect winning seasons and bowl games. It’s completely appropriate to expect the players to reflect pride and commitment, to be ready and give a winning effort.

This team quit. Not enough was expected of them, and they lacked toughness.

The next coach has to rebuild the culture. This is a program that needs identity and purpose.

The best available coach in the country is P.J. Fleck. He’s a dynamic recruiter that has built his program to an undefeated season. He has a vision and a process. He’s relentless, a promoter, a salesman. He’s driven and ambitious.

Fleck belongs in college coaching because his messianic and high-intensity approach doesn’t translate as well to the NFL, although he shares some of the fired-up, high-energy qualities of Pete Carroll. He molds his players and demands a lot out of him. At a tiny school in Kalamazoo, Michigan he had the 65th-rated recruiting class in the country, far outstripping his rivals.

Fleck meets with boosters regularly and runs all over the field at practice. He never stops pushing for commitment, for effort, for believing in a big dream. He’s young and charismatic.

The 36-year-old is easily the most dynamic candidate to lead the new vision for Oregon football, but the big stumbling block is that the coach has a ex-wife and four young children who are settled in the Midwest. He seems destined for Purdue, closer to those roots.

A marathon runner, Fleck’s energy would be perfect for the Oregon and Nike brand. But they probably won’t get him.

That’s a shame, because the wrong hire here could make the Ducks 1980s-bad again for a long while.