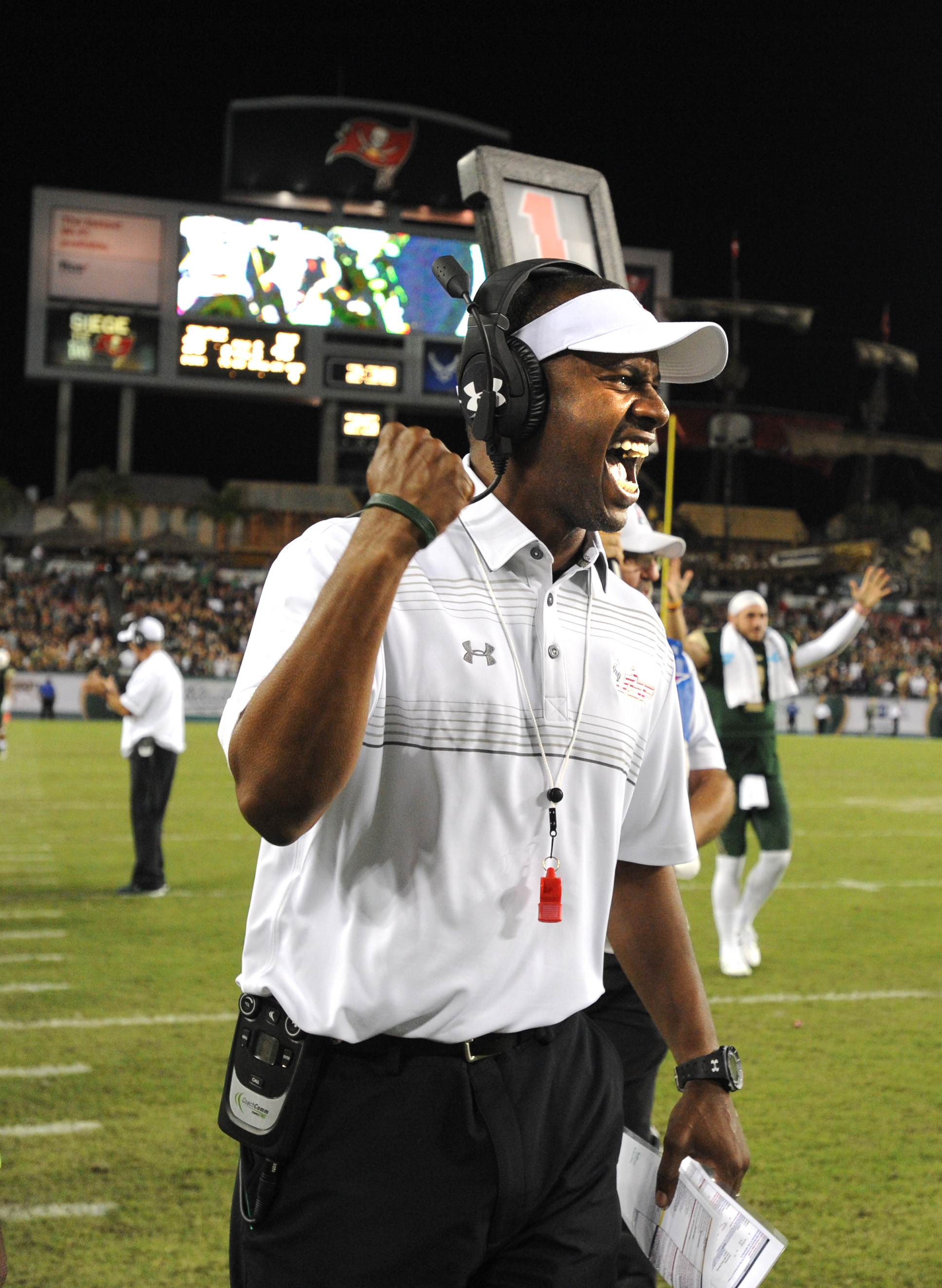 Willie Taggart coached running backs for Jim Harbaugh at Stanford, and molded Toby Gerhart into a star. His USF team is 10-2 and conference champions. (Photo by Cliff McBride/Getty Images)

Women love those house-hunting shows where a schlubby guy and his hot wife or two hunky realtors buy an old, rundown house for a trusting couple and transform it into a dream home with tasteful lighting, cute knickknacks, fresh paint and candles everywhere.

The shows are all pretty much the same despite the various clients, locales and the remodeling stars. There’s a lot of oohing and aahing at the end. A dream come true, just a little over the budget. In the middle of the show there’s always a crisis moment where the contractor finds dry rot or bad wiring or rusted pipes.

But the stars of the flip make a year’s salary in five weeks, and the famous-for-ten-minutes homebuyers are ecstatically happy with their now cutest house on the block.

I bring this up because Rob Mullens and his crew of influential boosters have just demolished the kitchen at the Hatfield-Dowlin Center after it took 30 years to build.

Now they’re running around trying to find a new contractor.

The Ducks have put a sledgehammer to 30-plus years of continuity and staying the course. They want to go with someone that’s new and trendy and has more eye appeal for a fanbase that’s losing interest. They want to shore up a sagging foundation, instill a better quality of discipline and commitment from their fast, athletic players. They didn’t think Mark Helfrich was the guy to get it done.

Finding the right guy is crucial. They are now a last place team looking up at a division of well-run programs that have a clear idea of their identity and method, led by smart, innovative coaches who have a command of what they want to do.

Fleck is a ball of energy and a compelling, interesting coach. Canzano says the UO brain trust feels he’s a case of flash over substance, and they’re hesitant about him.

That leaves Willie Taggart as the most interesting choice. Taggart has a losing record as a head coach, but he oversaw successful rebuilding efforts at Western Kentucky and South Florida. He’s dynamic and smart, and his offense leads the country in explosive plays while cranking out over 40 points a game.

Taggart is hip and charismatic but he instills an old school discipline among his players. Every Saturday night every USF player gets a text message from the coach. It says, “Be smart.” “Don’t do anything to jeopardize your future or this team.” “No means no, every time.”

His team has a 2.9 G.P.A, exceptional in big-time college football. Taggart holds them to high expectations on and off the field.

The 40-year-old and Tampa area native has some innovative ideas about how to run a program. He’s adopted the Baylor scheme into something he calls the Gulf Coast Offense, with an emphasis on speed and one-on-one matchups. The Bulls play an entertaining brand of football, and they’re 10-2 this year, league champions just a couple years removed from Skip Holtz’s disastrous tenure and a 3-9 finish.

What’s most intriguing about Taggart as a candidate is his high energy approach coupled with discipline and clear expectations. In an article by Steven Godfrey  of SB Nation he described his philosophy, the hallmark of how he teaches and what he’s trying to do in the lives of his players:

“What helps is being real with them and being honest with them. You have to constantly educate them. I grew up just like most of them. I can understand exactly some of the things they’re going through that they think people don’t see. It’s become more about teaching them how to do things that are expected of them, because often times, it’s not that they don’t want to do something, it’s that they don’t know how. They can’t. They do ignorant stuff because they were never taught how to do things the way we expect. It’s just assumed they do.”

“We have to change the approach. I don’t think we’ve been different enough. We’re going to have to be creative. There’s a lot of newness to a lot of what’s happening here now. We have to do something.”

Bruce Feldman of Fox Sports says that Taggart is a leading candidate for the Oregon job. Based on what I’ve read about him, I pray to Juju he’s right.