Who The [REDACTED] Is Bryan Rust?! 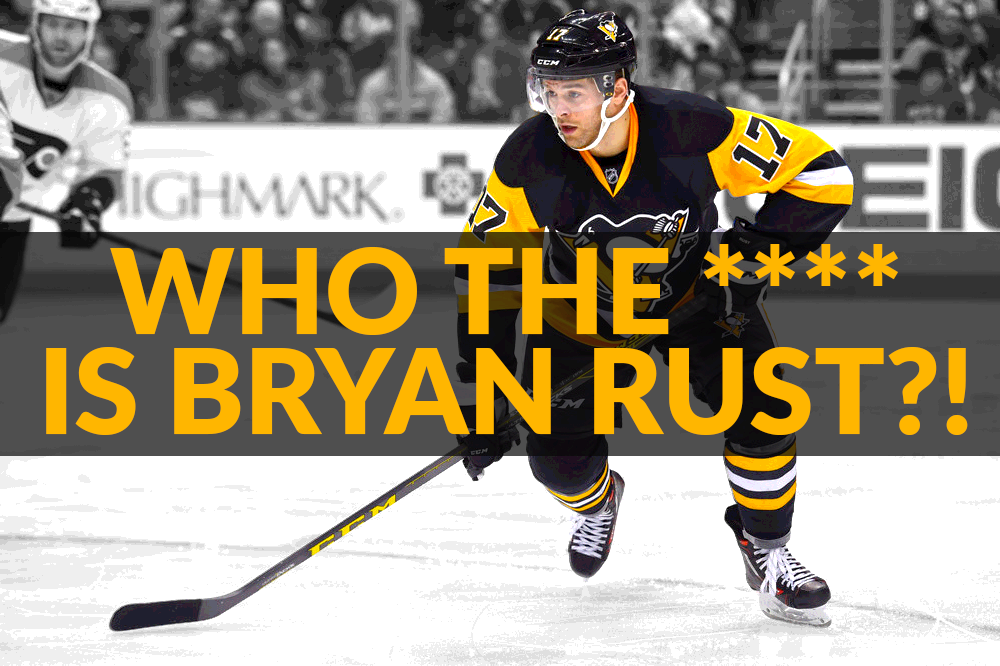 Who The [REDACTED] Is Bryan Rust?!

Last Spring, before the Penguins could raise the Stanley Cup they first had to vanquish the Tampa Bay Lighting. It wasn’t easy as the Bolts took games one, three, and four but the Peng-win-s pushed the Eastern Conference Final to a decisive game 7 at home. And who was the hero of that game? Was it Sidney Crosby? How about Evgeni Malkin? No? What About Phil Kessel? Nope. The hero of that decisive game seven was a player people still didn’t really know by name, Bryan Rust, despite his solid 2016 playoffs and series against the Lightning.

No, literally people still didn’t know who he was when the playoffs started:

Jasper’s Rink  did a story profiling the opposing players for the Pens-Caps series and they had this to say about Rusty, “Why you should know who he is: Because he’s going to play and we’ve profiled damn-near every other guy in the Pittsburgh organization with whom not every person on earth is intimately familiar.”

And when the Penguins defeated the Lightning, Sportsnet actually wrote an article titled, “Three things we learned in the NHL: Who is Bryan Rust?”:

Oh but the “who the (redacted) is Bryan Rust” story goes back further. Rust made the 2015-2016 Penguins out of camp. However, he only played five games before being knocked out with a hand injury until January. Then on January 9, his first game back, he promptly scored a game-winning goal causing everyone to ask just who was wearing the number 17:

Rust wasn’t (and still isn’t) an offensive juggernaut but he stood for a lot of what the Penguins under Sullivan seek to do, throttle the defense of the opponent with speed they don’t know what to do with. A motor and heart that never quit are the third round pick, 80th overall, from the 2010 entry draft and Notre Dame graduate’s best assets.

But when the playoffs came around he came up big when it mattered. When the Penguins had to win games six and seven of the Eastern Conference Final he potted three huge goals including the team’s entire offensive output in game seven. He added goals in game one of the Stanley Cup Final and two tallies in the Pens round one game five vanquishing of the Rangers bringing his playoff total to six, two more than his regular season total of four.

Then the 2016-2017 season got off to tough start as he missed the first three games with injury and had a less than stellar October. But he’s started to get it together of late, even if people still don’t know who he is. On night’s he isn’t scoring he’s doing the things that make him so tough to play against and he recently found himself on Malkin’s wing, all while people still didn’t seem to know who this guy was.

But nothing was quite as surreal as December 5, 2016, Bryan Rust scored a hat trick in the Penguins 8-5 win over the Ottawa Senators and no one seemed to realize:

No really, it wasn’t until they put hat trick up on the jumbotron that hats really started to come down. That’s right, the guy no one could remember existed last year got a delayed reaction to his first career hat trick because no one remembered that he had scored the very first of the thirteen goals the Pens and Sens put up that night in addition to the final two. Though its kind of hard to blame them as the third period seems to be all that matters to the Penguins anymore.

If it bothers Rust at all that people seem to have some sort of weird temporary amnesia surrounding him he doesn’t show it, then again he is a Stanley Cup Champion so that probably helps. His name will live on that chalice forever even if Arlene in Arnold can’t remember its Bryan with a Y.