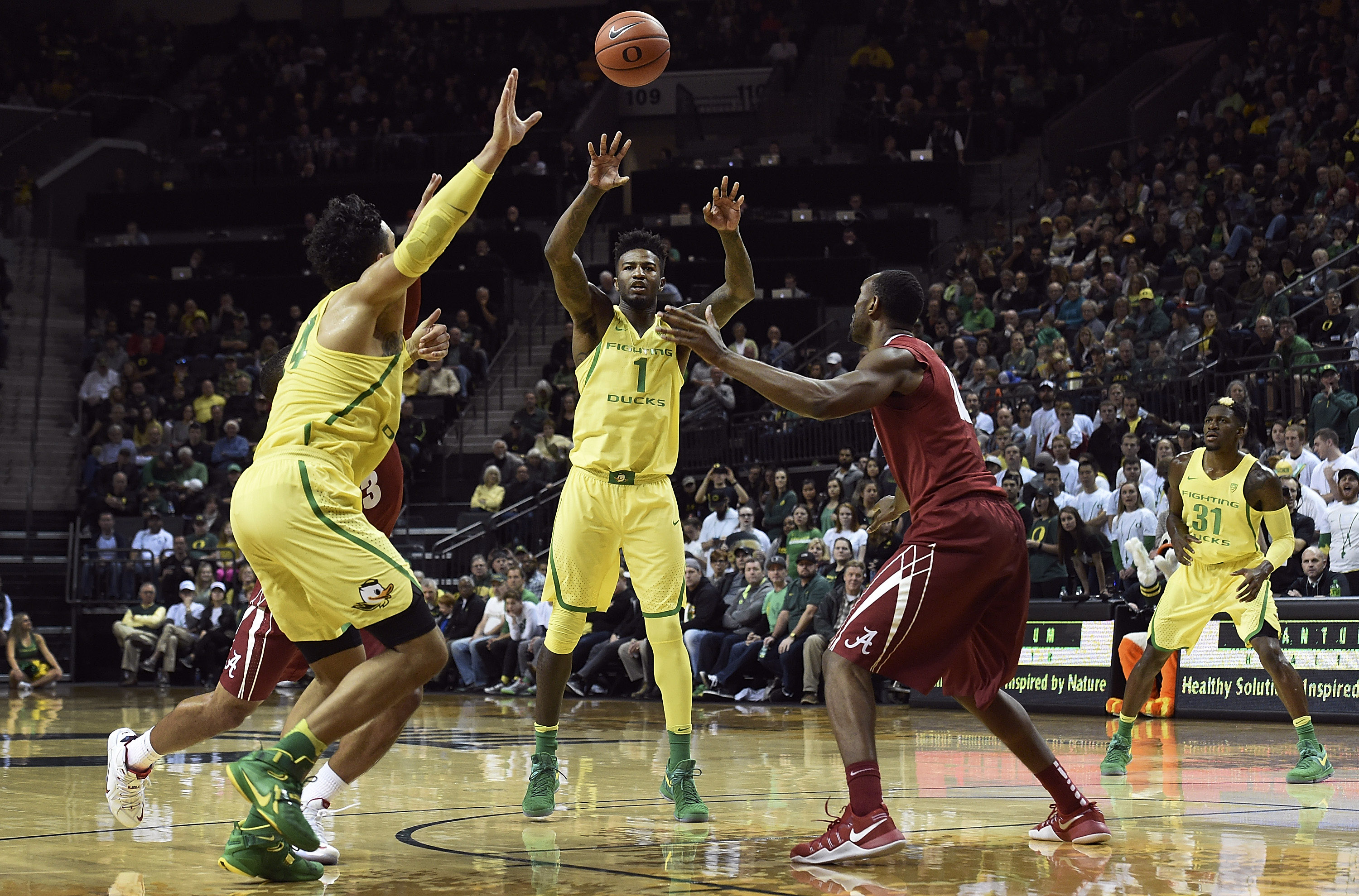 EUGENE, OR – DECEMBER 11: Jordan Bell #1 of the Oregon Ducks passs the ball to Dillon Brooks #24 of the Oregon Ducks during the first half of the game against the Alabama Crimson Tideat Matthew Knight Arena on December 11, 2016 in Eugene, Oregon. Oregon won the game 65-56. (Photo by Steve Dykes/Getty Images)

At the end the Ducks found the way to win and move their record to 8-2.  It was a great crowd for a mid-afternoon Sunday game, nearly 9,000, including new football coach, Willie Taggart. Last season the Ducks were in Alabama and battled back from a double digit deficit at halftime to secure the win. This time the Ducks were in control in the first half, though technically, this is a come from behind win.

A 3 by Dorsey gave the Ducks an 11 point lead, 36-25 at 18:23.  Four minutes later, Alabama, getting inside now, had the lead down to 4, 38-34. Everybody on the Ducks were looking the wrong way with 7:05 to play and a dunk made it 53-50, Oregon. Alabama continued their dominance inside with another offensive rebound and put back dunk to give them their first lead since the games early minutes, 54-53.

Dorsey made the lead for Alabama a short lived one with a 3 to make it 56-54 with 3:52 left. Another dunk by Donta Hall of Alabama tied it at 56. Oregon brought the ball downcourt and Alabama’s defense was tight. Brooks took the ball at the top of the key and drove to the basket, but Alabama was good on their switching and Brooks had nowhere to go; with the shot clock racing to 0, he found Ennis open behind him; Ennis caught the pass, and with an Alabama player diving at him released the shot, and swish; Ducks up 3, 59-56.  Brooks nailed a jumper on the next trip down the court, and a pair of free throws each by Dorsey & Ennis wrapped up the scoring.

The Ducks picked up their shooting some in the second half and finished at 23-52, 44.2, 8-20 on 3’s. Alabama picked up their shooting as well, finishing at 41.4, 24-58.  The Tide did their damage inside, beating the Ducks, 42-24 on points in the paint, and outnumbering the Ducks, 21-6, on second chance points, Alabama had 11 offensive rebounds compared to 6 for the Ducks, as Alabama finished on top of the rebound chart, 33-27. The Ducks were a bit less careful with the ball in the second half, finishing with 13, to Alabama’s, 18.  The Ducks kept the ball moving and finished with 18 assists.

Ennis hit the big 3, but Tyler Dorsey was big shooter, finishing with 19 points; 6-12 from the field, 5-8 on 3’s, and 2-2 from the free throw line. Ennis finished with 9. Chris Boucher was in double figures at 10and  had 3 blocks, but had trouble getting rhythm in the second half due to foul trouble. Jordan Bell had two blocks and ended up with 2 points.  Brooks struggled shooting, going 4-11, but, including the key assist to Ennis, finished with 6 on the night.

At times it looked like the Ducks were going to put this one away; but give Alabama credit and they look like a team that will win some games this season. The Ducks didn’t really get consistent play from anyone but Dorsey, but still got the win. Now, make out of this what you will, Savannah State, the team that Oregon just beat, 128-59, beat Oregon State, 93-90 in overtime.