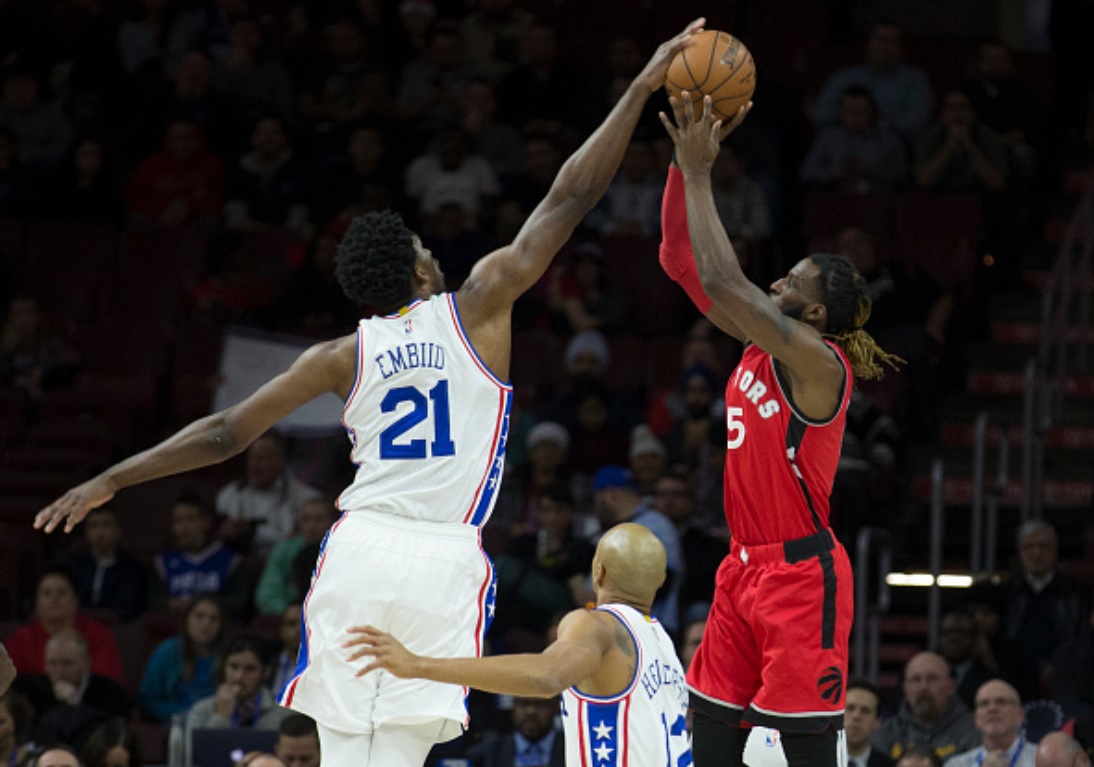 Entering play Wednesday night, one of two streaks had to come to an end. The Sixers were riding high on a 2-game winning streak, but Toronto had won the last 13 meetings between these two clubs. Ultimately, despite Philadelphia shooting 50% from the field as a team, 70 Raptors points between the second and third quarters stretched that Toronto stretch of dominance to 14.

The story of the night from a Sixers perspective was Joel Embiid and Jahlil Okafor in the starting lineup together for the first time. The Raptors start two traditional big men in Jonas Valanciunas and Pascal Siakam, making it a good time to try the tandem. The arrangement worked well early on, as Okafor scored 9 points in the first quarter on 4-5 shooting. Embiid did not receive a shot attempt in the frame, but he did have this remarkable close-out block:

Alas, the Sixers were ultimately done in by their own man, as Embiid caught a stray elbow from Ersan Ilyasova and had to go to the locker room with a nosebleed. With Embiid M.I.A., the Sixers went from up 43-40 with 4:39 left in the second quarter to down 60-54 at the half. Okafor had a pretty good game on the whole with 17 points, 4 rebounds, 3 assists, and 2 blocks, but he certainly did not help on the defensive glass (notice him disappear from the frame for the entire frame),

Example of Okafor's bad defensive rebounding. High effort guys find a way to get back into this play pic.twitter.com/zHkbArazdl

or offer much in the way of rim protection.

To really put the game away, Toronto started Patrick Patterson against the Embiid-Okafor combo in the second half. The smaller lineup stretched the floor and opened up lanes for DeMar DeRozan, who scored 14 in the third quarter alone. It was a big part of a very efficient night for the All-Star, who finished with 31 points on 11-18 shooting from the field, also going 9-11 from the foul line. Kyle Lowry got into the act as well. It wasn’t quite his 6-6 performance earlier this season against the Sixers, but Lowry went 5-10 from three for 20 points to go along with 7 assists.

Still, even as the Raptors were pulling away, there were bright spots, primarily from Joel Embiid, who ended his night with a line of 9 points, 6 rebounds, 5 assists, 1 steal, and 2 blocks. Joel jokes about wanting to be a point guard, but this is about as close to the position as a 7-footer can be:

and he showed off his rim protection while Jahlil looked lost in a spin cycle:

The Sixers even had one final surge in them, as a 20-7 run cut the Toronto lead to 5 with under a minute left, before proving too big a hole to overcome. That burst was led by Robert Covington, who stepped up on his 26th birthday for a season-high 26 points and 12 rebounds.

Yet, even more than the loss, the saddest takeaway came after the game, when Joel Embiid wavered for the first time this season in his commitment to the Process.

#Sixers center Joel Embiid: “I think for once since I’ve been a Sixer, I didn’t trust the process tonight …

Maybe the Sixers should play their best player at his proper position. We’ll see Friday night against the Lakers.

Observation and Grades from Wisconsin's win over Green Bay

Recap The Wisconsin Badgers overcame a sluggish start to blow out the Green Bay Phoenix 73-59. The Badgers were led by Nigel Hayes with 24...