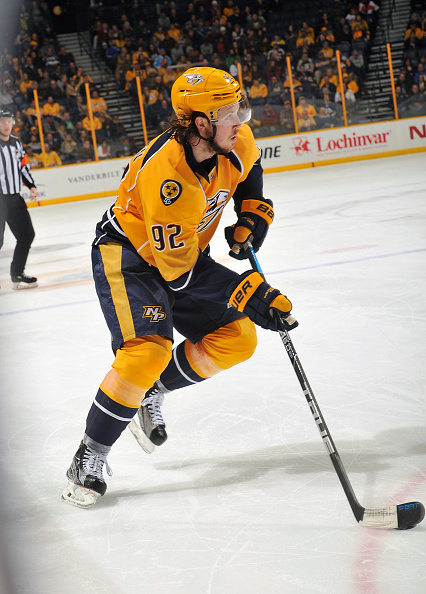 The saying in professional hockey is, “If Wayne Gretzky can be traded, anyone can be.”  Its true, and in a salary cap world it is believed some contracts are truly untrade-able.  One of those contracts was Shea Weber, who had signed a 13-year pact with the Nashville Predators.  As we discovered this summer, even Weber who was under contract until 2026 was traded the Montreal Canadiens for P.K. Subban.  So as improbable as it may be, it still can happen.  Who won on the deal?  We still don’t know, but with the Canadiens sitting atop the Atlantic division standings it appears as though they’re in the early lead but with both players signed to long deals will be a long time before any winner can really be declared.

The Wild go on a brief 1-game road trip to Nashville, an arena where they’ve struggled in the past.  However, if there are any distinctive trends to this season is the club’s ability to earn wins in places where they’ve struggled.  Perhaps that is a good sign against the Predators.  As we as saw with trades, as improbable as it may appear, it can happen.  Will it happen tonight?

1st Period Thoughts:  The Wild started the game with good pace and business-like attitude.  Minnesota was hustling well and also playing physical too.  The 4th line of Chris Stewart, Tyler Graovac and Kurtis Gabriel got the Wild going with tough shift where they were leveling Predators players left and right.  Predators would try to counter as Viktor Arvidsson gave people an idea why he’s Nashville’s #2 scorer as he motored into the zone and fired a shot that was blocked aside by Devan Dubnyk.  The next few minutes was spent with both clubs trading chances but it was mostly one-and-done with the defenses supporting their goaltender pretty well.  Minnesota would strike first thanks to a power play.  It was Jonas Brodin stepping into a puck that was partially deflected in the high slot that rang off the post and by Rinne.  1-0 Wild.  It was a huge tally that helped deaden the home crowd a bit.  Nashville would answer back with a goal of their own as Ryan Ellis swept in behind the Wild goal and then moved out front and rifled a shot top shelf by a well-screened Dubnyk.  With the ‘You Suck chant’ roaring, the Wild would raise their game and start to swarm in the Nashville zone.  Minnesota was looking to attack and after killing off an Eric Staal penalty the Wild tried to attack as he left the box only to be thwarted by a diving Roman Josi.  Minnesota kept applying pressure and it would yield a mistake as Rinne mishandled a puck and an opportunistic Charlie Coyle pounced for a goal.  2-1 Wild.  The Wild continued to be aggressive and Zach Parise would force a turnover and then move up the ice as Jason Pominville found Parise for a breakaway but his forehand to backhand move went high over the goal.  Graovac had a good chance of his own as he got a step on a Predators defender and then powered his way towards the goal and his backhander went off the crossbar and out.  Minnesota did not let up and a few minutes later it was Nino Niederreiter forcing a turnover out front that Staal swept up and fired a shot 5-hole by a stunned Rinne.  3-1 Wild and the arena was mostly quiet beyond a few cheering Wild fans in attendance.  The Wild were outhustling the Predators and even in the closing minute, Minnesota continued to swarm as Pominville missed on a golden backdoor chance where he was left all alone.  A great road period for the Wild, who were outshot 13-10.

2nd Period Thoughts:  The Wild would threaten in the first few minutes as Niederreiter again won a battle along the wall for the puck and then turned and sent a pass out front to Coyle that was stonewalled by Rinne.  Then the Wild would take their foot off the gas and the Predators would go on the attack.  Dubnyk found himself under siege with shots coming from just about everywhere as he seemed to be a bit frantic in his crease.  It started with a shift by the Koivu-Mikael Granlund-Jason Zucker line that was just extremely passive and would result in a call on Koivu.  The Predators wasted little time on the power play as James Neal threaded a cross ice pass to a waiting Mike Fisher swung it by Dubnyk before he could get across.  3-2 Wild still lead.  Minnesota would wake up a bit after the Predators goal but at times the Wild were guilty of trying to be too fancy with the puck.  They seemed to want to create some pretty tic-tac-toe goal instead of doing what made them successful in the 1st when they kept it simple.  Certain lines did keep it simple and they seemed to be rewarded with opportunities as Graovac set up Stewart for a chance and he let loose a shot that drew a big rebound from Rinne that just eluded a crashing Graovac.  Minnesota would generate another quality opportunity as Coyle raced in and ripped a shot off the right post and out.  The mental mistakes though made it maddening to watch as Minnesota thwarted a potential scoring chance with one too many passes.  The Wild were fortunate to still hold a 3-2 lead after being outshot 13-4.

3rd Period Thoughts:  It wasn’t the prettiest effort, but Minnesota also exhibited why they’re the top defensive club in the NHL tonight.  Minnesota sat back and defended its one-goal lead that had Wild fans cringing with each Nashville rush but in most cases the Wild had it under control with good sticks, taking the body at key moments and forcing the Predators to settle for attempts from the perimeter.  Dubnyk was solid, absorbing pucks and not giving up any juicy rebounds for Nashville to pounce on.  There was also some fiestiness down the stretch too as Colton Sissons tried to goad Kurtis Gabriel into a stupid penalty, where the Wild enforcer turned and basically said drop the gloves or else and Sissons tried one last time to push Gabriel but he kept his cool.  A Wild penalty threatened to derail the solid road effort but Dubnyk would stop Johansen with a great post-to-post save and Minnesota would get a big kill.  After that the Wild seemed to lock it down big time.  Minnesota sat back in a 1-2-2 trap and they forced turnovers and then worked the puck deep and routinely frustrated the Predators, forcing turnover after turnover.  The Predators would pull Rinne for an extra attacker and the Wild stayed calm and it was Eric Staal burying the empty netter and then Granlund with another empty net goal for good measure to seal a 5-2 victory.

Devan Dubnyk bailed out his club after it kind of let up in the 2nd period and didn’t allow their laziness to throw this game away.  Dubnyk had 34 saves in the victory and really took the Predators heart.  He did have some good defensive support from both his defenseman and his forwards.  I thought Marco Scandella, Ryan Suter and Jared Spurgeon had a great game this evening.  The team did surrender a power play goal, but the last kill really quashed the best chance the Predators had at tying the game.

Offensively the Wild’s line of Charlie Coyle, Erik Haula, Nino Niederreiter was a thorn in the Predators side all game long.  Niederreiter was especially pesky along the boards and he helped the Wild re-take the lead.  That momentum helped kill the crowd and allow the Wild to get settled in this game.  Brodin’s power play goal continues to give us hints of his promise and versatility to be solid at both ends of the ice.  I like the variety in the Wild’s attack and Graovac-Stewart keep providing shots on goal and good energy in the physical game.

This is a big road win for the Wild against a team Minnesota has struggled to beat in their building.  Minnesota did bend, but thanks to Dubnyk they didn’t break and they’d earn another big 2 points to keep their spot in 2nd place in the Central Division.  Good teams find a way to get it done when they’re not playing their best and let’s face it the 2nd period was awful so to win a game like that is a good sign.  I don’t mention the win streak because it will take care of itself, but now the Wild must return home for a rare mid-afternoon game against the Coyotes at home.  They may look easy but the Wild can’t worry about that and if they take care of business and focus on their game the winning will take care of itself.

Iowa would jump out to an early lead as Alex Tuch outmuscled Crookston, Minnesota’s Paul Bittner for a puck near the crease and drove home a rebound off a Hunter Warner point shot to give the Wild a 1-0 advantage.  The Monsters would answer back a little over a minute later as Joe Pedenza beat Alex Stalock with a wicked wrister.  Cleveland would then take a lead as ‘Iowa Wild killer’ Daniel Zaar tapped home a rebound off a Dalton Prout shot.  The Monsters would then get a goal with just 9 seconds left in the 1st as Alex Broadhurst buried a rebound opportunity of his own to give Cleveland a 3-1 lead.  Iowa would answer back as Nick Saracino would pounce on a rebound and beat Anton Forsberg with a quick shot to cut the Monster’s lead in half.  The Wild would tie the game up with just .4 seconds left on the clock as Mike Reilly let go a sneaky wrist shot off a successful draw to make it 3-3 going into the 2nd intermission.  In the 3rd, both clubs traded a variety of chances but neither team could get one by Stalock or Forsberg so the game would go to overtime.  In overtime, a costly high sticking penalty on Tuch gave the Monsters a 4-on-3 power play and it was T.J. Tynan beating a well-screened Stalock for the game winner.  Stalock had 22 saves in the loss.

C – Dmitri Sokolov (Sudbury, OHL) ~ the Russian sniper continues to impresses as he scored the game winning overtime goal plus one more and an assist in the Wolves’ 4-3 win over Sault Ste. Marie on Wednesday night.  Sokolov has 21 goals, 28 points, 4 PIM’s and is a -18 in 28 games.

Ben and Danny welcome Jared Donnelly to the podcast and he goes “basketball nerd” on the situation. The trio discuss all the recent Cavalier topics...