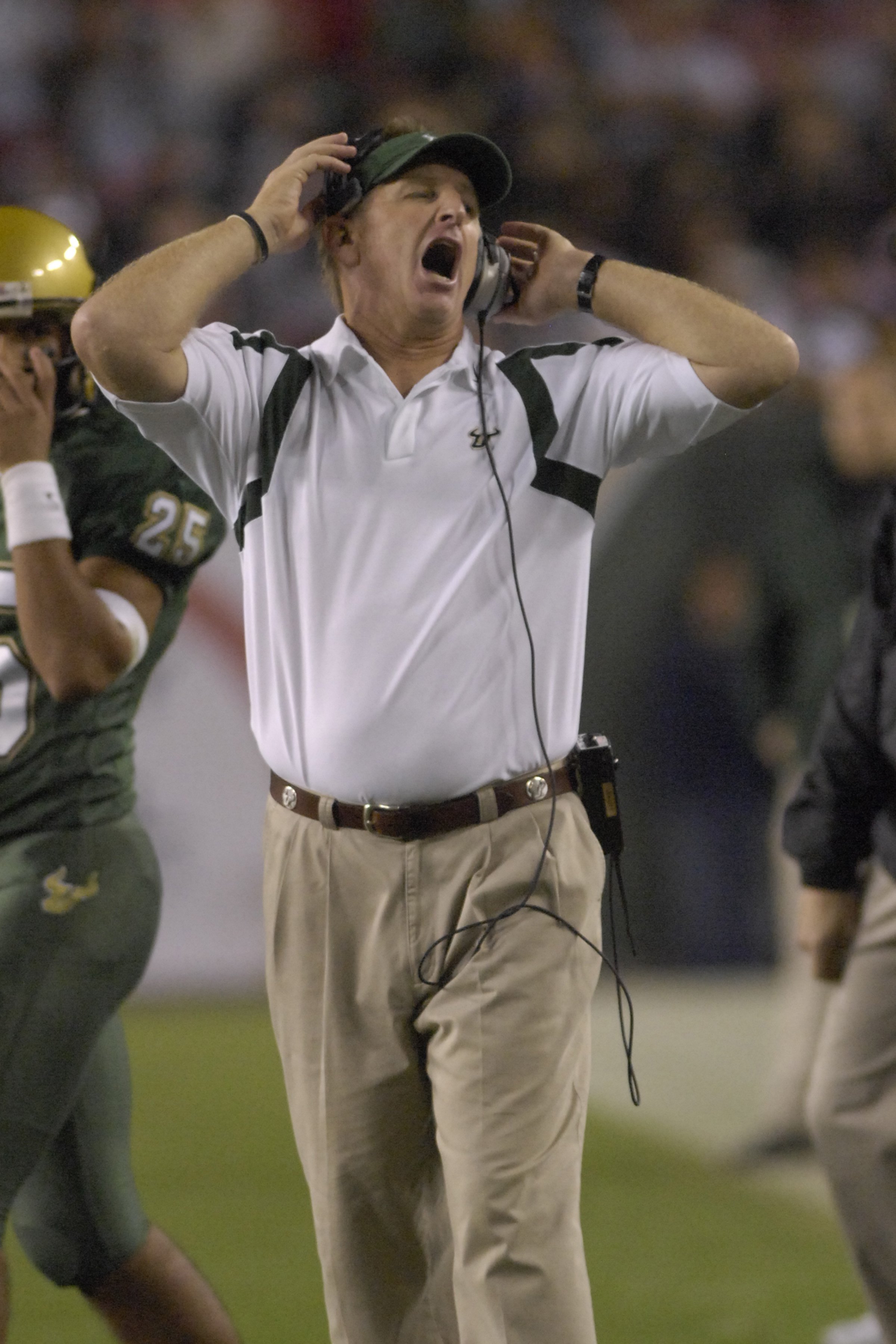 Intense, emotional and a smart football guy, Jim Leavitt has gotten results at every stop and worked with some of the game’s top coaches. (Photo by Al Messerschmidt/Getty Images)

This week new Oregon coach Willie Taggart found his defensive coordinator, nabbing Jim Leavitt from the University of Colorado, where the 60-year-old coach transformed the last-place Buffs from one of the nation’s worst defenses to one of the best in just two seasons. His new Duck contract makes him the highest paid coordinator in PAC-12 history.

Leavitt coached linebackers for Bill Synder at Kansas State, then became the head coach for a new program at the University of South Florida in 1997. He won 95 games over 13 seasons, taking the Bulls to a bowl game in each of his last five tries.

In November of 2009, at halftime of a close game with conference rival Louisville, Leavitt choked a player in the locker room and struck him twice. A walk-on named Joel Miller had committed a penalty for an illegal block on a punt return and been on the field when the Cardinals returned a kick for a touchdown in the second quarter.

Leavitt still denies the incident and in the ensuing firestorm he tried to cover it up. He allegedly told Miller, “Choose your words wisely. I’m the most powerful person in the building.”

Witnesses were intimidated into changing their stories. The coverup is always worse than the crime.

A year later USF settled a wrongful termination suit with the coach. They paid him $2.75 million with neither side admitting wrongdoing. $750,000 of the settlement was designated to acknowledge “Coach Leavitt’s contributions to building USF’s nationally respected football program.”

Skip Holtz, the son of legendary Notre Dame/Arkansas/Minnesota/South Carolina coach Lou Holtz, took over the Bulls and produced a series of lean and dismal seasons.

Willie Taggart rebuilt it, but first he spent an anxious year on the hot seat after a 7-21 beginning.

Taggart switched to a spread offense to take advantage of the speedy talent available in its Tampa recruiting hub. The Bulls started winning, reeling off 7 wins in a row in 2015 before putting together a 10-2 campaign this fall. The ebullient 40-year-old became a hot coaching commodity, with the Ducks choosing him a week after firing fourth-year head coach Mark Helfrich after a 4-8 season that featured four blowout losses and a stumble in the Civil War.

At the press conference announcing Taggart’s hire University of Oregon president Michael Schill said he didn’t know much about football, but added, “One bit of advice, which probably everybody in the state of Oregon can give him, is, ‘Go find a great defensive coordinator.”

The Ducks paid top dollar to steal Leavitt from Boulder after he reengineered the defensive unit at UC in two seasons despite inheriting low-ranked recruiting classes.

Leavitt’s a red ass, but he gets results.

The Buffs were 114th in the country when he arrived, jumping to 85th in his first year. This season they climbed to 18th in points allowed at 20.5 points per game, 17th in yards allowed at 328.3.

After losing the USF job Leavitt coached linebackers for Jim Harbaugh at San Francisco for four seasons. The 49ers made a Super Bowl while Leavitt forged a great working relationship with star linebacker Patrick Willis.

Coaching connections abound. Taggart not only followed Leavitt at South Florida, they both are from the Harbaugh tree. Willie T. was a running backs coach for Coach Khaki Pants at Stanford.

It’s a weird marriage of styles, these two. Leavitt’s an old-school screamer with a bulging vein in his neck, but he’s a sharp football mind, a stickler for details, a guy who builds toughness and discipline. Taggart has the 1000-watt smile and oozes charisma, a player’s coach who draws people in and charms the fans in public appearances.

But Taggart said earlier this week on the Jim Rome radio show that he needs his new team to get tougher. “We’ve got to change our attitudes and make sure we get everyone on the same wavelength and headed in the right direction,” he said. “Every single day we’re here we need to be working towards a championship.”

The Ducks looked soft in 2015, and there were games that the effort wasn’t there. Taggart told Rome and his national radio audience, “I can tell you just watching the film and seeing our guys play, I think that’s a big thing that we’ve got to get accomplished. I do know when it comes to physics, the bigger, stronger, faster team tends to win a lot. We’ve got to get bigger and stronger.”

The new head coach will likely announce the rest of his staff over the next couple of weeks. He’s been energetic and relentless on the recruiting trail, packing in a flurry of home visits before the NCAA dead period began on December 12th, shooting out offers to promising, fast players around the country, reaching out to a couple of big athletic defensive ends from Florida. He nabbed his first verbal commitment on Sunday, Darrian McNeal, a 3-star athlete from Florida with De’Anthony Thomas speed. McNeal’s gotten busy on social media, reaching out to other uncommitted recruits. “We need dogs,” he wrote on his Twitter page.

About Leavitt, a long record of accomplishment and dedication shouldn’t be erased by a man’s worst moment. The Ducks do need his brand of discipline and attention to detail. He’s a fierce recruiter and knows the game, having learned more of it from two exceptional mentors in Bill Snyder and the wacky but brilliant Harbaugh. He’s coming here to get results, and he’ll demand a high standard of commitment.

Leavitt favors the 3-4 defense, which matches up better generally against the wide-open PAC-12 offenses. It will be a return to the familiar for Oregon players who struggled in Brady Hoke’s 3-4. Expect Troy Dye to blossom into a star. As McNeal rightly noted, the Ducks have a shortage of dogs. Leavitt will break a couple of clipboards, but the defense will steadily improve.

There’s a compelling irony the new staff will face almost immediately. One of their first decisions involves linebacker Torrodney Prevot, who was suspended for all of the 2015 season after being accused of striking his girlfriend, a female Oregon athlete, in the face during a domestic dispute. No charges were filed in the incident, but it was messy and embarrassing for the program and the university. Helfrich acted quickly to suspend the player during the investigation

Prevot is a senior with a redshirt year available, a cat-quick defensive end from Texas, athletic enough to play the hybrid drop-end position that’s so hard to fill in a 3-4 scheme.

Oregon appears to be the school of second chances. Will the same standard of forgiveness and understanding apply to Prevot that applied to his new coach? Yet still, the locker room is one thing; violence against a woman is another.