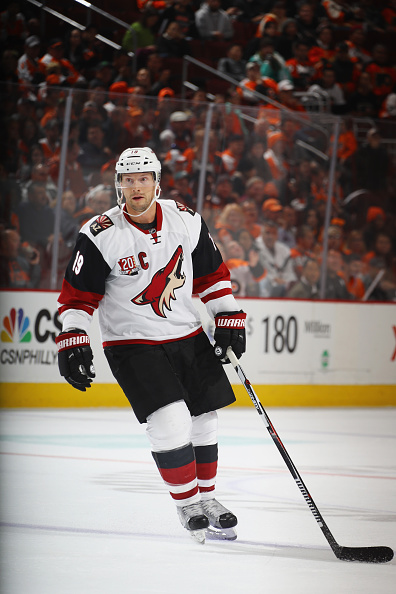 Arizona surprised many by tabbing 27-year old John Chayka as General Manager.  The analytics wizard had first joined the Coyotes as an assistant GM in 2013 after graduating from the Richard Ivey School of Business at the University of Western Ontario.  Chayka founded a company called Stathletes Inc. in 2009 which worked to be a consultant company for professional sports teams to add that analytics aspect to their organization.  He is the first GM in NHL history to be of the Moneyball variety as league owners latch onto the trend of valuing player metrics over personnel who have played the game.  It is of note that the Arizona Coyotes’ website entry for Chayka still has him listed in his old job, which you can see here.

So can an analytics guru prove that you can have winning hockey on the cheap?  So far the results have been slow, but its the beginning and no doubt NHL owners around the league are watching the Coyotes’ progress to see if that is an approach they’d like to take.  Most teams around the league employ analytics personnel but no one has taken it farther than Arizona has.  Can Arizona surprise the red-hot Wild?

1st Period Thoughts:  The game got started off a little slowly for the Wild, who appeared to be a bit cautious of the young Coyotes squad opposing them.  Arizona was eager and looking as though they were going to wait for a Wild mistake and then counter attack quickly.  The Wild got the first shot off as Chris Stewart took a Tyler Graovac pass and he’d let go a backhander that was steered aside by Mike Smith.  Arizona would kind of control the next 5 minutes of the game as holding call on Jason Zucker gave the Coyotes the man advantage and they came dangerously close to taking the lead.  After stopping an initial shot by Alex Goligoski, Darcy Kuemper kicked out a rebound that went right to Oliver Ekman-Larsson and his chance was just kicked aside by the Wild backup at the last moment.  A minute or so after the successful kill, the Coyotes had another tremendous chance as Tobias Rieder dangled around a defender to be all alone in the slot but his wrist shot was snagged out of the air on a nice glove save by Kuemper.  Minnesota would regroup and would use some of its speed to draw a few penalties of their own as Graovac made a nice little pass to Zucker who turned on the jets to have a small breakaway chance but his backhand shot was blocked aside by Smith but he drew a penalty on Ekman-Larsson in the process.  On the man advantage the Wild moved the puck very well, setting up Ryan Suter for some bombs from the point that nearly cashed in as Zach Parise tipped one just over the Coyotes’ goal.  Inexplicably on that power play, one player who appeared to be disinterested in shooting the puck was Mathew Dumba.  Dumba passed on a few opportunities to shoot and if he’s not going to shoot he might as well be left off the power play.  The Wild wouldn’t cash in on the 1st one, luckily they were able to draw yet another penalty on Ekman-Larsson and Minnesota would go back to work and they came dangerously close just a few seconds into the man advantage as Jared Spurgeon rang one off the pipe.  Then moments after that it was Suter firing a wrist shot from the point that appeared to be deflected and off the pipe and in.  1-0 Wild.  The Wild’s goal had Arizona a bit frustrated and Jamie McGinn took a run at Jason Pominville who had played a puck a few seconds before getting steamrolled by McGinn on a pretty late check to no call from the official.  The period would end with the Wild feeling in control even though they were outshot 10-9 in the 1st.

2nd Period Thoughts:  In the first half of the period, the Wild were carrying the majority of the play, but it wasn’t yielding a tremendous amount of shooting opportunities.  The Wild were playing poised with the puck and the Coyotes were expending a lot of energy chasing them around the ice.  Smith was busy in his crease as the Wild were getting closer to registering another prime scoring chance.  Minnesota would finally cash in as Tyler Graovac blocked a shot and then tracked down the puck and then made an ice power move and transitioned the puck from his forehand to his backhand to try to thread a cross-ice pass to Zucker but his ‘pass’ would go off the inside of Smith’s leg and in.  2-0 Wild on a goal Graovac deserved because his incredible effort.  The goal seemed to energize the Wild and Minnesota really put the Coyotes on their heels.  Just moments after Graovac’s tally Eric Staal had a 3-on-1 with Charlie Coyle and Nino Niederreiter and as Nino took a pass and let go a shot that Smith sprawled to stop the puck sat in the crease and Coyle was just a few steps too late to pounce on what should’ve been an easy tap in goal.  Minnesota kept attacking and Dumba would step into a slap shot that would ring off the post and out.  The Coyotes tried to counter attack but the Wild were quick to retreat and help their goaltender and Arizona barely got off a shot on goal.  Minnesota had another golden opportunity late in the period on the power play as Mikael Granlund had an open net to work with and he fired a shot up and over the net.  The Wild would get an appreciative cheer from the home crowd as they loved to see the supreme confidence the team was playing with in those last 5 minutes of the period.  Graovac was in beast mode most of the period, dangling around defenders but perhaps overhandling the puck as he missed out on some chances to put the puck on goal because of it.

3rd Period Thoughts:  Considering how dominant the Wild appeared to play in the 2nd, one would almost expect them to take their foot off the gas in the 3rd.  But that didn’t happen as Minnesota continued to attack and force the Coyotes to defend in their own zone.  Arizona’s Connor Murphy couldn’t handle a pass and the puck was swept up by Chris Stewart who raced in and beat Smith 5-hole.  3-0 Wild.  Even after Stewart’s goal the Wild kept attacking and swarming all over the Arizona end of the ice.  Nino Niederrieter, Charlie Coyle, Zach Parise all had ‘oh so close’ chances in the 3rd but either found the post or missed open chances.  The Coyotes tried to counter attack but even when the managed to get a player like Anthony Duclair for a chance all alone, Kuemper was there to steal it away with a wicked glove save.  Arizona would eventually spoil Kuemper’s shoutout bid as Brendan Perlini skated in and rifled a shot top shelf, stick side to cut the Wild lead to 3-1.  The goal made Arizona attempt to add some drama by pulling Smith for an extra attacker but the Wild would add the exclamation point instead as Eric Staal outworked Ekman-Larsson for a loose puck in the Arizona zone and quickly tucked it inside the right post to seal a 4-1 Minnesota victory.

Kuemper was terrific, making 27 saves in the victory.  He looked calm and collected in the crease for not having had a start in a long while.  He probably deserved the shutout, but he really did a fine job of bailing his club out with some big saves on a few odd-man chances where he robbed Rieder and Duclair with nice glove saves.  Defensively, I thought Spurgeon, Ryan Suter and Christian Folin were tremendous this afternoon.  The Wild were perfect on the penalty kill too, but Kuemper again made some big saves at a point when the game was still 0-0 to prevent Arizona from building confidence.

Offensively the Wild was creating chances from all of its lines and if it wasn’t for some great work by Mike Smith this game could have easily been 8-1 or worse.  Minnesota hit at least 4 posts and the 4th line was really buzzing all game long.  Graovac didn’t look like a 4th line center, but rather like a player worthy of more ice time and its no coincidence he was the main beneficiary to an early game injury to Erik Haula that the team is calling a lower body injury.  Nino Niederreiter probably deserved a goal for how assertively he was playing in this game as well.  Still its good to see Stewart and Graovac be rewarded.

This was a classic trap game and the kind of game where you feared Minnesota might try to coast and pay for it against the Coyotes who have been pretty good as of late.  Instead the Wild played like a team desperate for points and put the Coyotes on their heels and kept piling on until the very end.  Minnesota reaches 40 points before Christmas and is playing like a team that believes in itself and is buying heavily into what Bruce Boudreau is selling.  The victory should keep Minnesota in 2nd regardless of what happens in the Chicago / St. Louis game.  Either way, its a lot more fun covering this than what we normally have in December.

The Monsters and Wild would split their 2-game series as Iowa would pull off some late game heroics to get a quality road win against the defending Calder Cup champions.  Cleveland would take the lead late in the 1st on Daniel Zaar‘s wrist shot that beat Steve Michalek top shelf that also sent the teddy bears flying as it was Teddy Bear Toss night.  Zaar must get excited anytime he plays the Wild because he always seems to score against them.  The rest of the game the Wild threw everything they had at Joonas Korpisalo and the Monsters but could not get the equalizer until under a minute left in regulation when Mike Reilly scored to send the game to overtime.  Steve Michalek and Korpisalo were solid through overtime so the game went to a shootout.  It would go five rounds until Alex Tuch finished it off with a pretty dangle goal that snuck through 5-hole to give the Wild a 2-1 shootout victory.  Michalek had 17 saves in the win. 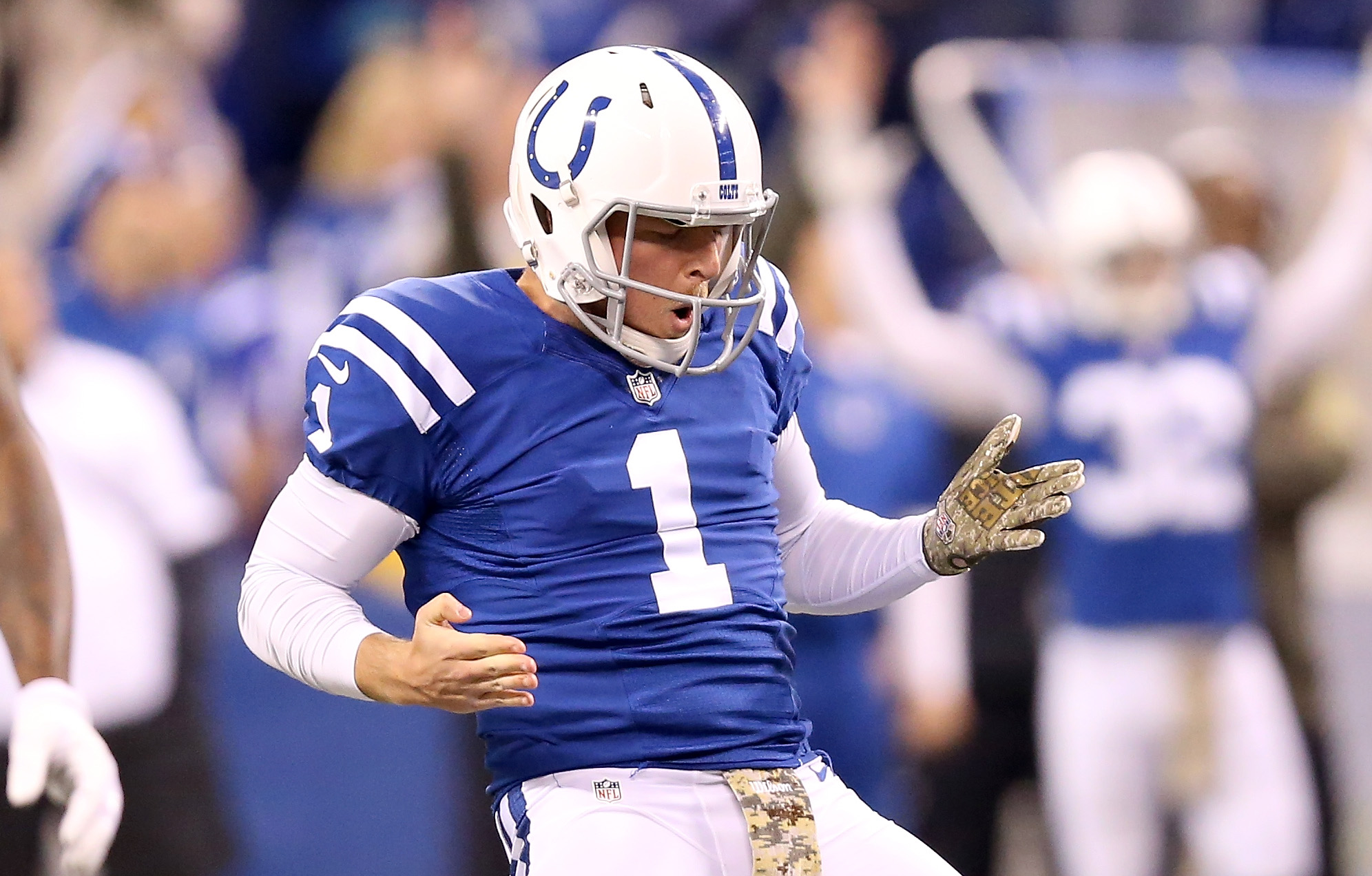 Colts punter Pat McAfee spread some holiday cheer around Indianapolis Friday by paying off the electric bills of 115 families. Through the generosity of @PatMcAfeeShow,...