Eagles have a boxer’s chance to knock out Ravens… 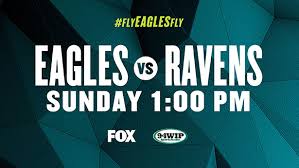 The weather will be wet and rainy in Baltimore this Sunday with a temperature in the high 50’s F. Feels like a perfect day for an upset win by the Eagles…

The Odds Shark mainframe computer simulated it out to be a 33-12 blowout for the Ravens. I’m not feeling that prediction at all—but you can’t argue with a machine, Jim.

Vegas has the Ravens as a 5.5 point favorite—the Over/Under remains at 40.5 total points.

This game would feature a very interesting comparison between Carson Wentz’ current season and Joe Flacco’s rookie year in 2008 except for the fact that Flacco went 11-5 in his first year, which unfortunately is not going to happen for Carson Wentz. As Alex Smith of PE.com broke it down, Flacco’s rookie season was supposed to be a “red-shirt” year, but like Wentz, circumstances called for Flacco to become the Ravens full-time starter by the time the regular season started. He started all 16 games, and his numbers are very comparable to what Wentz has accomplished. Flacco threw for 2,971 yards and had a touchdown/interception ratio of 14/12. Flacco’s rookie season was filled with ups and downs, typical of any first-year player, but like Wentz’ current situation it was clear that a bright future was in store.

My best possible scenario for Wentz and the Eagles offense on Sunday is they prove how overrated the Ravens’ defense is based upon the statistical rankings. On paper the Ravens rank fourth in the league in scoring defense and total defense, and they’re the best team in the NFL when it comes to stopping the run. But look at what Tom Brady and the Patriots did to them last Monday night—over 500 yards of total offense! And when the Patriots chose to run the ball late, they gashed the Ravens for significant gains to put the game out of reach.

The Ravens’ linebackers are the unsung keys to any success their defense has had this year. Without their traditionally strong pass rush talent this season, the team has relied upon inside backer C.J. Mosley, who has compiled 59 tackles and three interceptions on the season and is quickly emerging into the leader of the Baltimore front seven. Zachary Orr is rangy and athletic as well as physical between the tackles. OLB Terrell Suggs is not the intimidating pass rusher he used to be, but playing with one arm braced for a biceps injury he has never been better at setting or closing the defensive edge.

To compensate for their lack of a “Sack Pack”, the Ravens will attack Carson Wentz and his protections with a variety of different pressure packages, using a multitude of fronts, alignments, personnel groupings and disguises up front and in the secondary. This is the Dean Pees method, something the Ravens’ defensive coordinator perfected when he worked for Bill Belichick and the Patriots.

Running the ball between the tackles will be difficult for the Eagles for one big reason—nose tackle Brandon Williams, who may be unknown to most fans but whom many players consider the best nose tackle in the league.

We will get to see how the youngest Eagles step up in this game. If Allen Barbre can’t go, rookie Isaac Seumalo gets his first start at right tackle since 2013, when he was a sophomore at Oregon State. With Darren Sproles out (concussion) and Wendell Smallwood sidelined with a knee, Kenjon Barner will be active behind Ryan Mathews, and rookie Byron Marshall, promoted from the practice squad this week, will be active for the first time in his career.

Since our tailgate party is in CrabTown today, I went to executive chef Eric Houseknecht of the Thames Street Oyster House in Fells Point and asked for something traditional but unique for the game today. Eric is the genius behind one of the most well-regarded seafood menus in Baltimore. In addition to traditional favorites such as the raw oyster bar, lobster claws and calamari, the Thames Street Oyster House also serves up unique dishes designed by Eric himself, such as lobster pot pie, five pound baked stuffed Maine lobster or New England clam and lobster boil. Here’s what he came up with for Philly fans today: In the words of the fantastic BYU volleyball commentator Steve Vail, “WOW!” I don’t know if anyone across the volleyball world anticipated an NCAA DI...