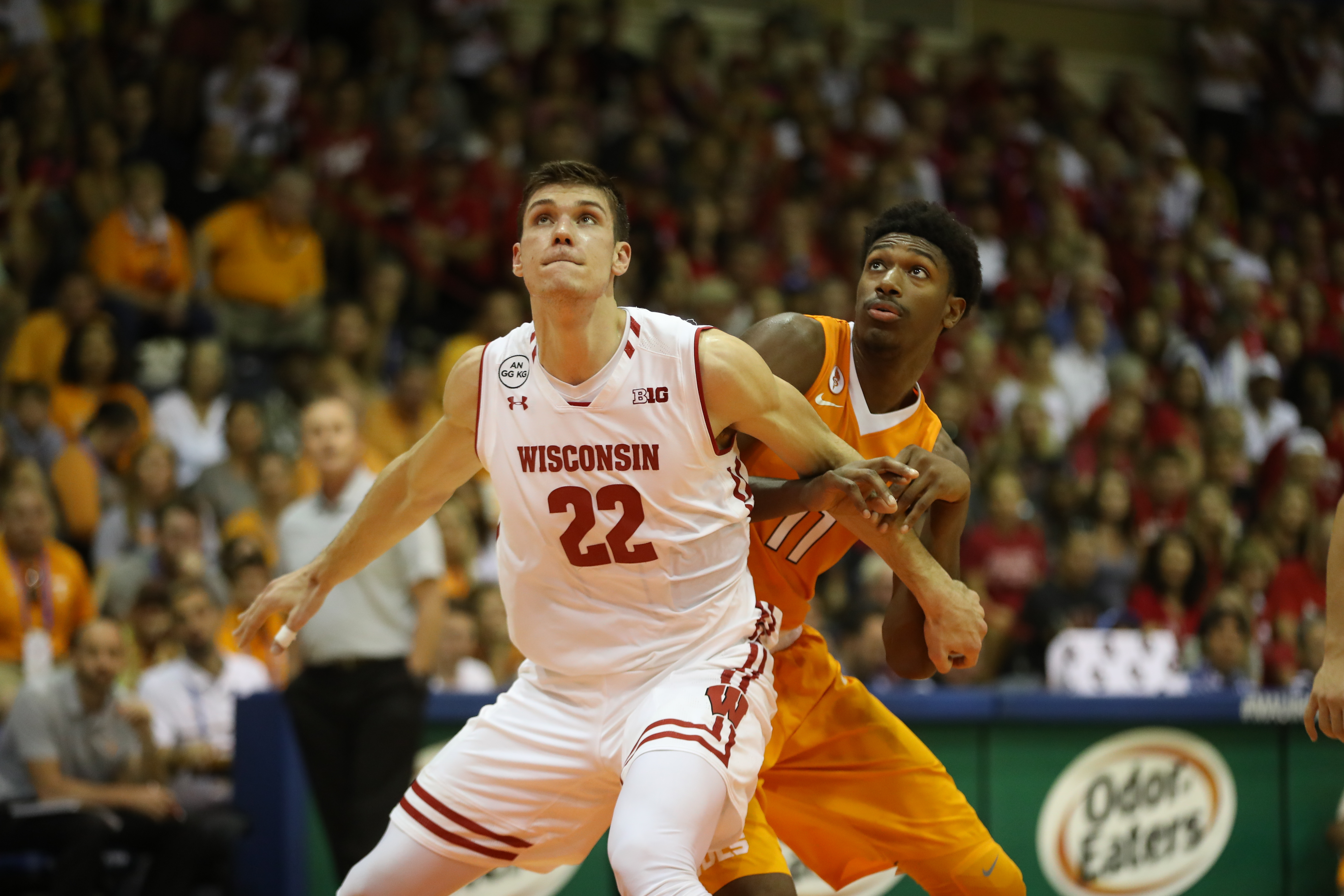 As impressive as it is that Bronson Koenig is Wisconsin’s leading scorer, the way he has done it is even more impressive. He has been really good at hitting tough mid-range shots this season, especially with the shot clock winding down. So while his assist numbers are still relatively low for a point guard, he is doing his job, which is getting buckets and beating the shot clock.

However, it hasn’t all been good for Koenig. His three-point shooting percentage is down more than 4% from last season. He also forces bad shots every now and then. But for the most part, Koenig has been a really good scorer for the Badgers.

Zak Showalter has been the same reliable, energetic, no-frills player he has always been for the Badgers. While he is unaggressive on offense, he has been solid from three-point range, which really helps Wisconsin’s spacing. He has also shown off his stellar court vision, making some really nice dishes to teammates for open layups.

But Showalter’s most important contributions come on the other side of the ball. He is one of the Badger’s most reliable perimeter defenders. He is averaging 1.5 steals per game, and has also taken numerous charges. Showalter is never going to be a prolific scorer or a star. He just does his job.

It has been a tale of two seasons for the veteran forward. Over the first six games of the season, Hayes looked like he did at the end of last season. He was standing around the perimeter and shooting jump shots instead of getting inside and playing to his strengths. In losses to Creighton and UNC, Hayes was 4/16 from beyond the arc. His shooting percentage and efficiency ratings were in the dumps, and it looked like his eagerness to impress pro scouts would derail Wisconsin’s season.

Then a miracle happened. Following the UNC game, Hayes started to play to his strengths. He has dominated inside, and played like a point forward. Over the last seven games, Hayes has played at an All-American level, averaging 16 points, six rebounds and four assists, while shooting 59% from the field. If Hayes keeps playing like this, wins will continue to pile up for the Badgers, while national awards pile up for him.

Brown has been a key piece on offense this season. His ability to stretch the floor is vital for the Badgers. He also looks more comfortable putting the ball on the deck and getting to the rim or pulling up for a mid-range jump shot. Last year, whenever he dribbled, I had a minor heart attack. This year, he looks much more comfortable with the ball in his hands.

He still needs to do a better job taking care of the ball. His defense and rebounding also could be better. But overall, he has done a great job in the role of a stretch-4.

I really wish someone kept a stat comparing Wisconsin’s points per possession when Happ gets a post touch versus when he doesn’t. I’m sure the difference is astronomical. As good as Nigel Hayes and Bronson Koenig are, the Badger’s offense is at it’s best when it is running through Happ. Early on in the season, he struggled with double-teams. Now that he’s made some adjustments, he has been unstoppable.

Happ’s superb efficiency hasn’t gone unnoticed by the national media. He has appeared on many National Player of the Year top ten lists, and Ken Pomeroy even had him in his top three at one point. Not only is he great on offense, but he is also a complete player. He is a double-double machine, and is averaging a team-high 1.5 steals per game. Once Happ gets his free throw percentage up and his turnovers down, he will be the best player in the Big Ten.

Trice has been the surprise of the season so far for the Badgers. The freshman has been a huge offensive spark off the bench, shooting three-pointers at a spectacular rate. In fact, at 60%, Trice is shattering the single season record for three-point percentage. In addition to his absurd shooting, Trice has the poise of a senior. It’s still early, but it looks like Trice is going to be next in a long line of great Wisconsin point guards. Yet another recruiting steal for the Badgers!

Speaking of recruiting steals, the athletic sophomore has been fantastic off the bench for the Badgers. He is easily the best defender on the team, has a knack for making hustle plays, and is a stellar rebounder. Oh yeah, and he can do this!

He has terrific hops, and knows how to make them count. He needs to improve his free throw shooting, but other than that, Iverson has been stellar. He is just a pure playmaker that has earned even more minutes heading into conference play.

There really isn’t a whole lot to say about Thomas. At this point in his career, he is just a big body that can give the starters a few minutes of rest here and there. He is a tough defender and battles hard on the boards, but he doesn’t add much on offense. The one thing he does deserve a lot of credit for is his improvement from the charity stripe. Last season, he shot 47% from the line. This season, he is up to 88%. Maybe he can teach Happ, Iverson, and Hayes how to shoot free throws.

Coming into the season, there was a lot of hype surrounding Illikainen. However, it hasn’t come into fruition. He still seems like the same tentative player we saw last season. He has also struggled with his shooting, which was supposed to be his biggest strength. He does fine against the puff cakes, but looks overmatched against the stronger teams Wisconsin played. Over the course of the non-conference slate, Illikainen’s minutes dipped, and he will likely not be a big part of the rotation going forward.

D’Mitrik Trice’s spectacular start was a good thing for everyone except Hill. The 4th year junior has been buried on the bench, clearly the 10th man in the rotation. When he has played, he looks a lot like he did last year. He is quick, confident and a good scorer, but he is also a bit too erratic. Hill isn’t likely to play much in Big Ten play. 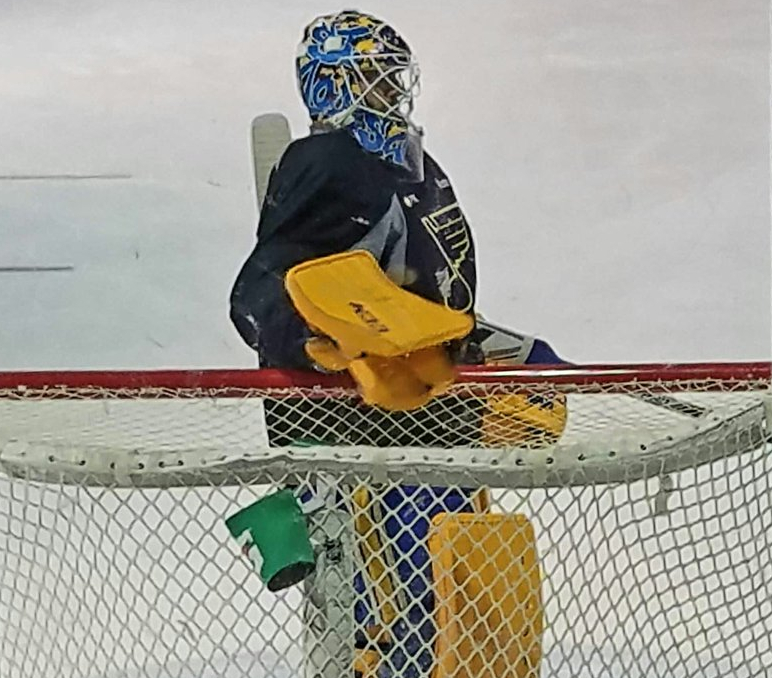 The St. Louis Blues are preparing for the Winter Classic and they’re already trying out some of the new gear they’ll wear during the big...