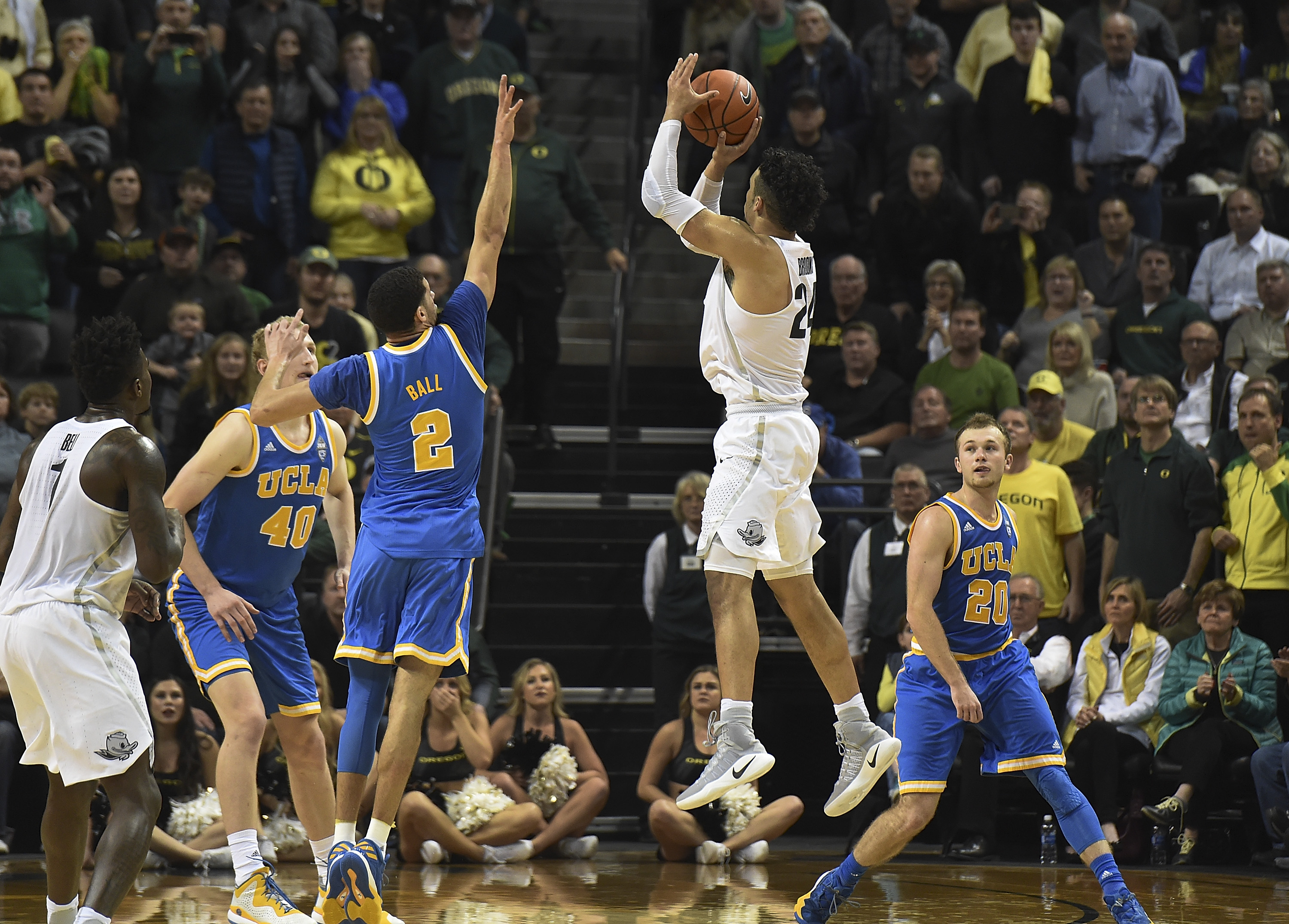 EUGENE, OR – DECEMBER 28: Dillon Brooks #24 of the Oregon Ducks hits the game winning shot over Lonzo Ball #2 and Bryce Alford #20 of the UCLA Bruins on December 28, 2016 at Matthew Knight Arena in Eugene, Oregon. (Photo by Steve Dykes/Getty Images)

Okay, did you all stick around to see how this one ended?   Oregon’s win streak at MKA is now 34, as the Ducks dealt #2 UCLA their first loss of the season. The Ducks had been the prohibitive favorite in the Pac-12 , a final four favorite, UCLA was playing to save Steve Alford his job. However, when the two teams met at MKA, the Bruins were flying high, a win at Kentucky on their resume, and the Ducks were still a work in progress.

Oregon kept the pressure on, the lead staying in the 5-8 range until a spurt put them up 49-37 with 3:08 in the first half. The Ducks were rolling, until a skirmish under the basket resulted in a flagrant foul being called on Kavall Bigby-Williams for hitting, you guessed it, Thomas Welch. Welch hit the two free throws and then Alford connected on another 3; 5 straight by the Bruins and they had the momentum. But, with the crowd behind them, the Ducks held on, and ended the first half, up 5, 52-47.

The first half had actually gone UCLA’s way. The Bruins were averaging 98 points a game; the Ducks had won with defense, holding their opponents to 70 or below in 12 of their 13 games. But, even with that, Oregon was the dominant team in the first half.

Of course the second half was coming up, and if you’ve followed the Ducks you know that shooting is their weakness, as well as they do everything else, putting the ball in the basket is the most important task, and well. The first 5 minutes of the second half went alright for the Ducks, 8-8, making it 60-55. Two free throws by Jordan Bell made it 65-57 at 13:13. Remember that 65 for the Ducks. It would be 5:26 seconds until the Ducks would score any more points, on a couple of free throws by Dorsey; meanwhile UCLA had gone on a 15-2 run and led, 72-67.

Payton Pritchard is something to behold. He would be the driving force for fantastic finish. His 3 with: 13 left got the Ducks with in 1, 87-86. He fouled Bryce Alford, Alford missed the free throw.  With 1:3 seconds to go, he found Dillon Brooks open at the top of the key, and his assist on Brooks’ 3 had Jerry Allen sounding as excited as he did describing , “The Pick”. Of course the drama wasn’t quite over. The crowd didn’t go crazy when Brooks’ shot went through, they were cleared off in time to not have a technical foul issued. So, UCLA had .08 of a second to get the ball in. But, Lonzo Ball could only make a sidearm heave that wasn’t close.

This was a HUGE win for the Ducks. Now they have to keep it cool and take care of USC on Friday. 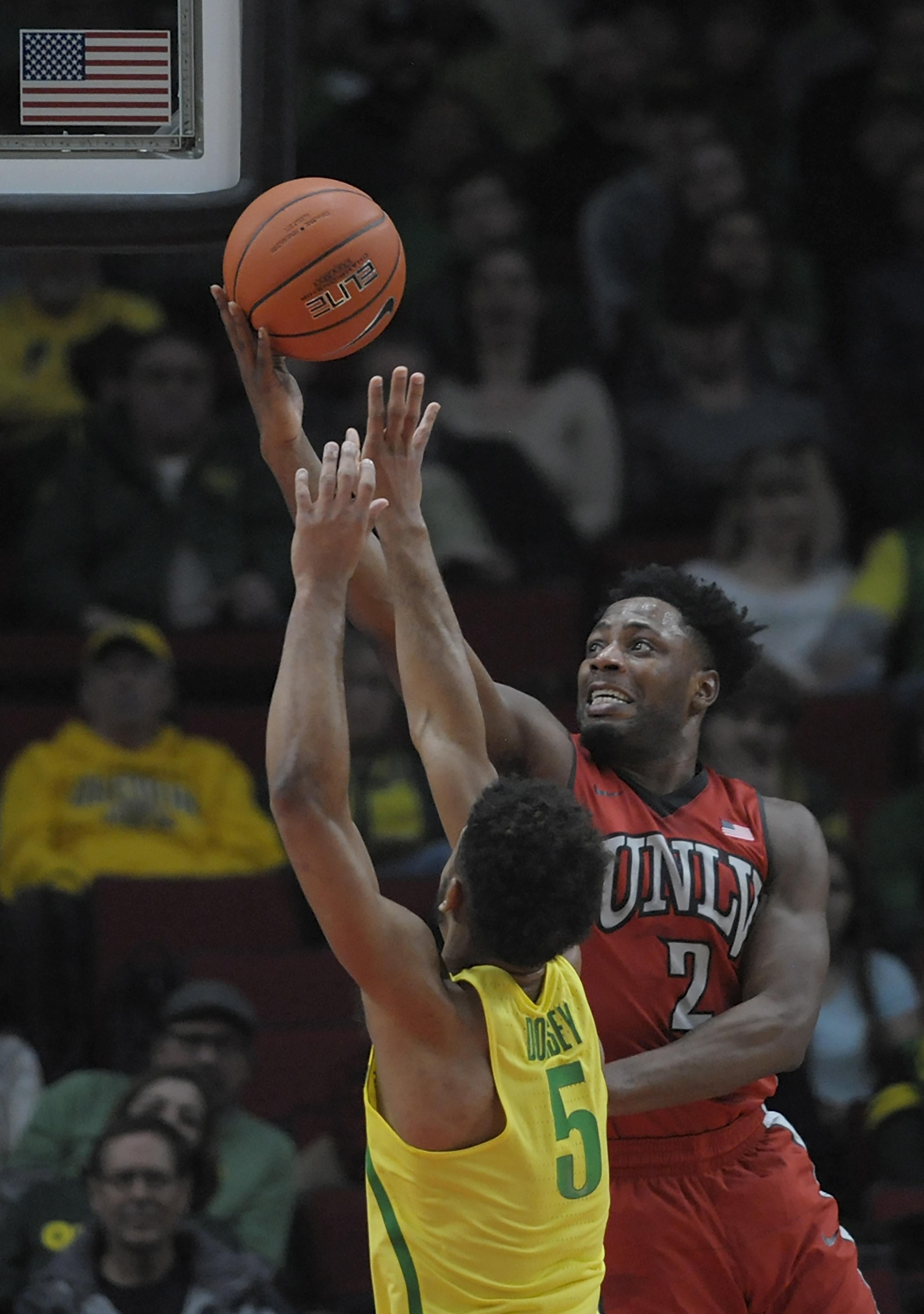