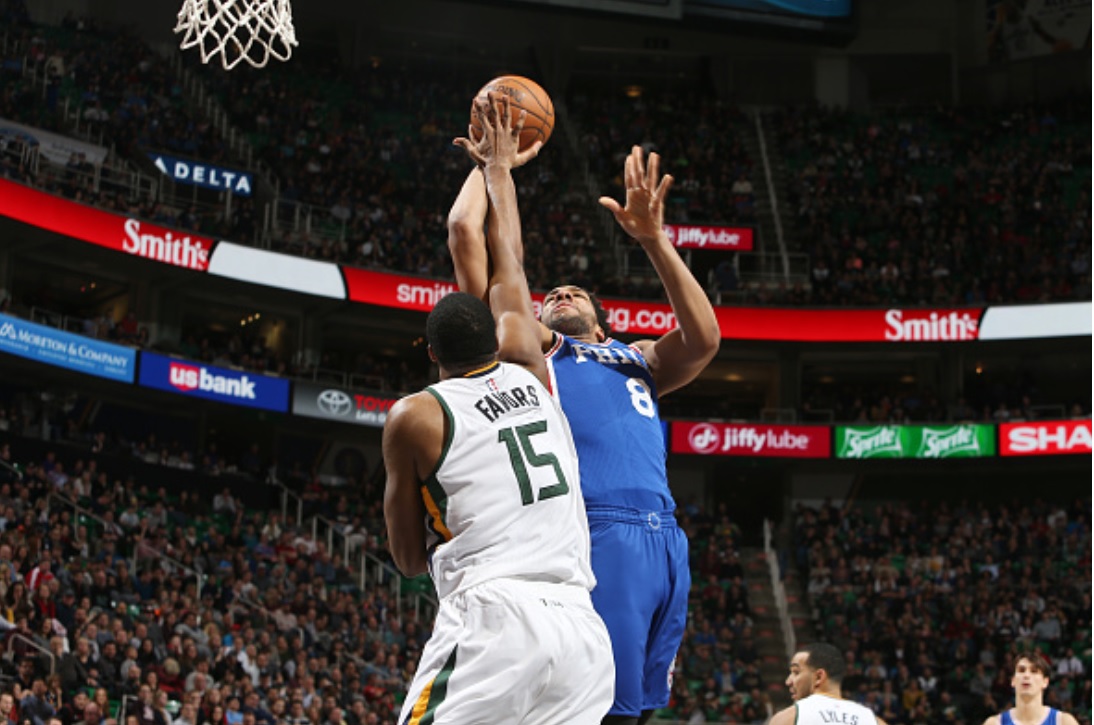 Sitting Joel Embiid on the first night of a road back-to-back, the Sixers weren’t expected to hang with a Utah team getting George Hill back and fully healthy for maybe the first time this season. Perhaps, that made it even more frustrating that after leading the Jazz 74-70 after three quarters, Philadelphia dissolved Alex Mack-style into a withering pile of goo to begin the final frame.

With Jahlil Okafor back in the game “anchoring” the last line of defense (in the sense that he dragged everything down, not that he was the bedrock of the defense), Utah went on a 21-2 run across the first 6 minutes of the quarter. Certainly, Okafor didn’t help matters, both due to his own poor defense and the fact that teammates felt compelled to overhelp to try and cover for him, but all the perimeter players for the Sixers had a poor game defensively.

The Jazz shot 15-26 from behind the arc, many of which were wide-open looks where a Sixers defender didn’t even bother to run out and contest. Hollis Thompson had some sequences where he looked like he was musing about New Years Eve plans and had forgotten he was taking part in a basketball game. Robert Covington got a couple deflections, but it definitely wasn’t his usual stellar defensive performance; his 0-11 shooting night was the capper on a truly terrible game.

Naturally, despite the majority of the team playing poorly, Thursday night’s game will fall into the Okafor vs. Nerlens Noel debate pile. It’s no coincidence that the Jazz put the game away with Okafor out there and Noel on the bench. Having a defensive stalwart like Noel (or Embiid) on the floor goes a long way toward covering up others’ mistakes.

Noel even had a good game on the offensive end, scoring 6-10 shooting. Most of his buckets were dunks off feeds from others, but that’s all you really need your center to be able to do. I’d rather have an athletic option to finish around the rim over a guy who needs the ball in his hands and transforms the offense into a slow, soggy mess.

A Sauce dish with some Nerlens jam. https://t.co/EXofJlbXYK

Before the fourth, I was even ready to call this a good Okafor game. Jahlil scored all 13 points of his points in the second quarter; it was the highest total by a Sixer in that quarter this season. He made quick moves, completely unafraid to attack Rudy Gobert, and carried the offense to a halftime lead on a night the outside shooting wasn’t there (6-24 from three as a team).

If he played like that all the time, you could deal with Okafor’s defensive shortcomings. Alas, those spurts only come every once in a while, and he’s such a net-negative at other times that it’s nice nearly worth it to wait around for one of his hot stretches.

Luckily, these issues will be nudged aside Friday night as Joel Embiid returns to the lineup against Denver. As much as we get frustrated by the Jahlil Okafor experience, it’s secondary to the fact that the Sixers have their franchise center ready to dominate for years to come.

·        Sergio Rodriguez sprained his ankle at the end of the third quarter and did not return. We might get a lot of TJ McConnell, with a side of Point Sauce Castillo, Friday night.

·        Dario Saric had a nice game offensively, scoring 14 points on 6-11 shooting. Beyond Noel getting significant playing time, a byproduct of Embiid being out was Dario not having to spend any time at small forward. He certainly looked more comfortable at his natural position going against an opposing power forward.

·        Ersan Ilyasova led the Sixers in scoring with 16 points on 7-13 shooting, recording a double-double with a team-high 12 rebounds. It’s a shame Philadelphia didn’t grab Ilyasova at a different point in their life cycle; he’s a very useful player to have out there.