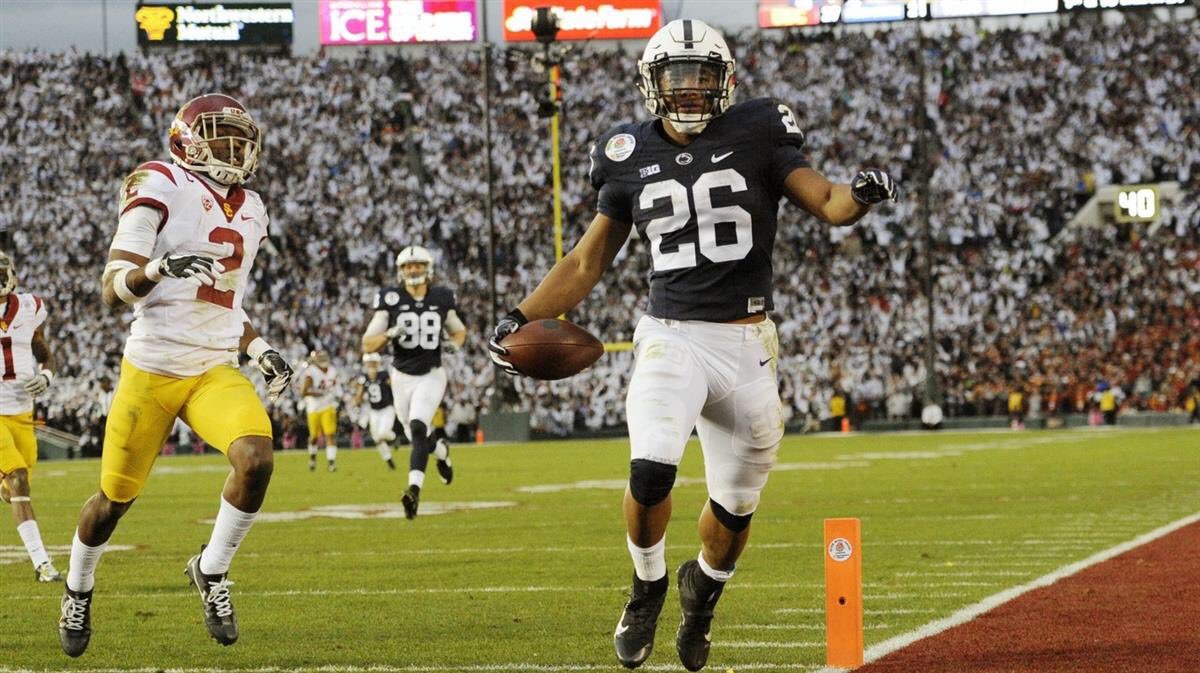 Penn State and USC squared off in the Rose Bowl Monday afternoon, and this one would not disappoint, until the end that is.

Penn State won the toss and elected to receive the opening kickoff. Miles Sanders avoided disaster by jumping on the ball after miss playing the opening kickoff, but Penn State would start deep in their own territory. It would be a bad start for the Penn State offense, as DeAndre Thompkins and Trace McSorley didn’t seem to be on the same page as Thompkins stopped running while McSorley aired it out 30 yards down field into the hands of the USC defender. Sam Darnold and the USC offense could only muster two yards on their opening drive and had to settle for a field goal. The 51 yarder was missed and set up Penn State with decent field position. Penn State got going with back to back 12 yard runs from Barkley, but two plays later when McSorley went to hit Thompkins, the ball tipped off of Thompkins hands and into the hands of Adoree Jackson. Darnold and his offense wasted no time going 50 yards in under 2 minutes to go up 7-0 on the Nittany Lions. After a quick three and out by the Lions, USC moved down the field and settled for a 22 yard Boermeester field goal, 10-0. Penn State still couldn’t get anything going and was forced to punt again, and once again USC was able to put points on the board with a 44 yard field goal, 13-0. Finally, the Penn State offense got going, after a couple great grabs from Chris Godwin, Saquon Barkley did his thing punching it in from 24 yards out, 13-7. USC used two big chunk plays to get down to the PSU 3 yard line and then Darnold linked up with Deontay Burnett for the touchdown, 20-7. Penn State would return the favor as McSorley connected for 29 yards, then a couple plays later, McSorley was under pressure, rolled out to the sideline and threw a dart to the corner of the endzone where Godwin made an unbelivable grab for the score, 20-14. Once again, the scoring would not stop as Darnold hit his favorite target JuJu Smith-Shuster for 36 yards, he then hit Darreus Rogers for the touchdown, 27-14. Trace McSorley would not be out done as he marched his team down the field and linked up with Gesicki for the 11 yard touchdown right before the half. 27-21 at the half.

Like usual, Penn State would come alive in the second half. The defense quickly got a three and out and then it was the Saquon show as Barkley took the first play of the second half 79 yards, breaking multiple ankles for the touchdown and Penn State’s first lead, 28-27. After the defense got another quick three and out and then McSorley quickly fired a deep ball to Godwin who caught the tipped pass and took it 72 yards to the house, 35-27. The defense came alive again as Brandon Bell picked off Darnold and returned it to the three yard line, Bell would be hurt on the play and would not return. McSorley took a read option into the endzone for the 42-27 lead, Penn State scored on four straight offensive plays. Darnold would not go away though as he marched the Trojans right down the field and hit Smith-Shuster for the 13 yard score and then a two point conversion, 42-35. A couple penalties held Penn State sustain a drive that led to McSorley hitting Barkley on a 7 yard pass for the score, 49-35. The fourth quarter was a different story as Darnold and running back Ronald Jones moved down the field for the touchdown, 49-42. Penn State struggled to keep a time-consuming drive alive as they faced a third and 4 with 2:01 left and decided to run with Barkley instead of passing, Barkley failed to get to the edge and was dragged down for a loss. USC got two straight pass interference calls and before you knew it, they were at the Penn State 27. Darnold hit Burnett for the score to tie things at 49 with 1:20 remaining. Penn State started at their own 35 ans started with a one yard Barkley run, the next play McSorley went deep and was nearly picked off. On third down, McSorley threw to Godwin in double coverage and it was intercepted and returned 32 yards to the PSU 33. Three plays later, Matt Boermeester hit the 46 yard field goal for the win.

Well it was a fantastic game, but the magic ran out a little early for this Penn State team. Penn State definitely missed not having Blacknall and Bowen as the receivers did not play well outside of Godwin and the defense failed to get pressure and cover the middle of the field. The defense failed to record a sack which helped Darnold have the amazing day that he did, Penn State failed to get a sack in three games this year, all three games were losses. The offense recovered from its slow start by scoring on seven straight possessions and at one point four straight plays, something we may never see again. The team played lights out in the third quarter out scoring USC 28-8, and it was looking like Penn State might run away with it as they did so many times this year. But, the offense just froze in the fourth quarter only gaining 14 yards and was unable to pick up timely first downs. Penn State’s big play offense had struggled through out the year on short yardage situations and unfortunately that continued at the end of this one.

McSorley looked poised to lead his team down the field for the game winning field goal, but an ill-advised pass almost certainly sealed Penn State’s fate. Not having Bell in the fourth quarter along with no Bowen made things very difficult on the defense and Darnold took advantage. Franklin and his staff did a great job getting the team back into this game and they did a tremendous job all year, the only thing I would question was not putting 6’6 Gesicki or 6’4 JuWan Johnson out there to try to block that last second field goal. Saquon Barkley had arguably, if not definitely the best game of his career with 250 total yards and 3 touchdowns. McSorley did a great job recovering from his slow start but all receivers not named Godwin had a combined three catches.

Yes, this season did not end in a Rose Bowl victory, but it was one heck of a season. These players and coaches did a tremendous job recovering from a 2-2 start to win nine straight games to win the Big Ten Championship and make the Rose Bowl. The game was an instant classic, one that will be remembered for years, Darnold was absolutely perfect in this one and deserves a lot of credit leading his team back. This was one of those games that you hate for someone to lose, and unfortunately that team was the Nittany Lions. Despite the loss, it was one great ride this year.

Up next: National Signing Day 2017