The Aldridge to Green connection out of the post-up 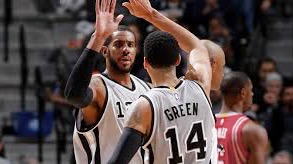 AT&T CENTER – With the post-up ability LaMarcus Aldridge has in his skill set, it’s an option the San Antonio Spurs can go to either when Aldridge has a mismatch in the low block, or it’s a look the team can use when they need to slow the pace down but still have ball in the hands in one of their All-Stars. One deadly option the Aldridge post-up is bringing to the Spurs’ offense is open 3-pointers, mainly from the left wing area, for sharp shooter Danny Green.

When Aldridge gets the ball in the low block and a defense tries to double team or swarm him, this is what has been occurring when Aldridge kicks out to Green.

Of Green’s 180 assisted made baskets last season, Aldridge was the assist man to Green just 12 times. So far, through 39 games this season, Aldridge has already passed that mark with 13 assists to Green, which is tied with Kawhi Leonard for the second most assists to Green on the team. So, even the data shows the connection Aldridge and Green are building this season, especially out of Aldridge’s post-ups.

With Green shooting above league average from 3-point range this season, he’s been a part of giving San Antonio the fourth best offense in the NBA (111.3 Points Per 100 Possessions). Last season, the Spurs finished with the third best offense, but that team scored 108.4 Pp/100. If Green’s with the starters, defenses have to pick their poison if they try to double Aldridge or Kawhi Leonard. When he plays with some of the players from the second unit, Green is once again effective in getting shots off screen action or being the recipient of passes from the drive and kick game. You can also see Green’s confidence is back from long range as he’s even attempted more pull-up transition threes too.

Prior to Thursday’s game between the Spurs and Los Angeles Lakers, Lakers Head Coach Luke Walton was asked if team’s are scouting Green differently this season based on last season’s shooting display, where Green was cold in making just 116 of his 349 attempts from the outside.

According to Walton, Green is still highly respected as a long range shooter, and he’s always a priority for defenses to try to run off the 3-point line.

“No,” said Walton on if teams can back off of Green from outside. “For someone who shoots the ball like that, unless he does that for a couple of more years, you know, you do it three or four years in a row, maybe. But Danny, he’s a run-off 3-point shooter. No matter how many he’s made or missed, if in transition or a half court set, if the ball is getting swung to him, we’d better be flying at him.”

In 79 games last season, Green had 23 nights where he didn’t make a three in a game. So far through 31 games this season, he’s only been three-less just three times. In fact, Green is currently on a hot streak from the outside, as he’s made at least one three in 15 straight games dating back to December 14, 2016, when the Spurs defeated the Boston Celtics.

With Green’s already known defensive ability, he’s helped the Spurs again become one of the top-3 defensive teams in the league. If Green can stay shooting above league average from three for the season, it’s almost like he’s a new wrinkle to their offense, since bringing in Aldridge in the summer of 2015.

In our daily Wake-Up Call, we get you ready for the day with a complete look at all things Pittsburgh Pirates. With pitchers and catchers...