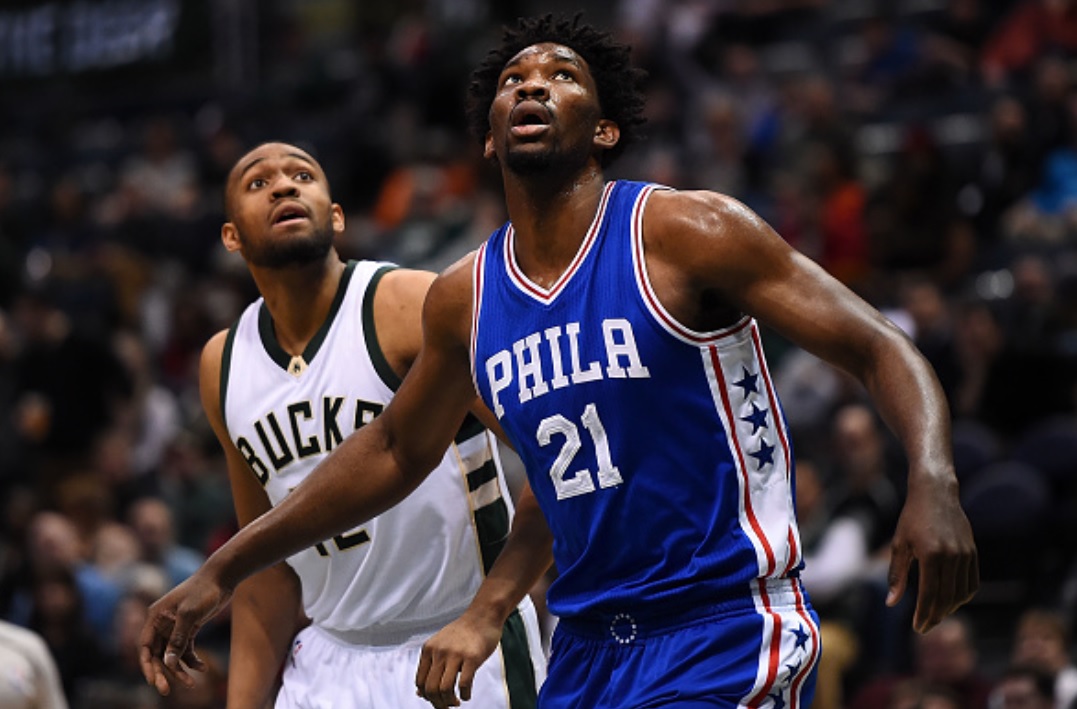 With the Sixers playing a mid-afternoon game in Milwaukee as part of the Martin Luther King, Jr. day schedule, it was certainly not the normal game day routine for Joel Embiid, who doesn’t have a large catalog of game day experiences from which to draw from in the first place. Perhaps understandably then, he started out a little slowly, with just 4 points at halftime, as his young star counterpart, Giannis Antetokounmpo, wowed the home crowd while tallying 21 points on 9-11 shooting by halftime.

It’s a good thing Aaron Rodgers is around to single-handedly boost the morale of the greater Wisconsin area, because the second half reversal had to be a huge letdown for the cheeseheads at the Bradley Center. The Greek Freak’s production dropped off to only 2 second half points, partially due to foul trouble, partially due to strong defensive efforts by Embiid around the rim.

All game long, Embiid was an absolute monster when Milwaukee had the ball, finishing with 2 steals and tying a career-high with 5 blocks. He really wanted the 6th rejection, sprinting full-out in the closing seconds of a game that was already over to swat away a Jabari Parker lay-up attempt (he was questionably called for a goaltend). Whenever he was in the game, the Bucks had to account for his presence on the court, and seemingly every shot they put up was impacted. Philly Mag’s Derek Bodner noted how poorly opponents have been shooting against Embiid during the team’s recent stretch of strong play.

The opponent is shooting 38.9% from the field in the 191 minutes Embiid has played during this recent run. thirty eight point nine. https://t.co/J6ABddzVVb

When his offensive game fell into place later in the second half is when Embiid completely put the team on his back. One of the great things about his game is how efficiently he can get points, even when his shot isn’t falling. Embiid ended the day with 22 points on just 9 shot attempts, going a whopping 13-18 from the foul line, and chipping in 12 rebounds and 2 assists. It marked the 9th straight 20-point game for the rookie (still a record for someone who hasn’t played 30 minutes in a game). If he’s going to be catching passes in the open court like this and throwing down earth-shattering dunks, I’m not sure how anyone could expect to stop him.

The guy who threw the pass on the play above, Dario Saric, also had himself a great game. The Homie had 17 points on 6-11 shooting, also collecting 9 rebounds and 4 assists. It was the third straight game he’s hit multiple threes (2-5 on the game), which combined with his passing ability and all-around hustle makes him a very valuable guy to have on the floor. He just needs to remember he’s not playing under FIBA rules, after he forgot once and knocked a ball off the rim for an obvious goaltending violation.

The victory was especially impressive because the Sixers were missing a couple key pieces from their recent winning streak. Sergio Rodriguez filled in well for the injured TJ McConnell (sprained wrist), finishing with 10 points, 7 rebounds, and 6 assists. He works well with Embiid (most people do, honestly) because his biggest weakness (perimeter defense) is mitigated by having JoJo back there to erase mistakes. Philadelphia was also without Nerlens Noel, who was a late scratch with a sprained left ankle. Jahlil Okafor filled in and per usual, had a few nice offensive moves, but with him in the game, the lane was as open for the Bucks as a 24/7 7-11.

The Sixers have now won 6 of the last 7 games in which Joel Embiid has played. The team is playing great basketball behind a legitimate superstar and seems to be having a great time doing it. As Dario Saric said after the game, Trust the Friendship.