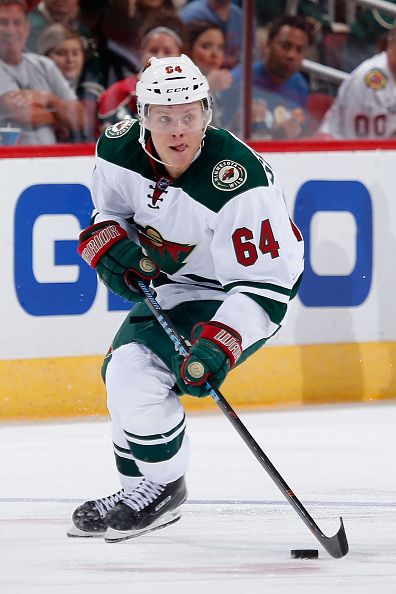 “Threw the game away”, “we played dumb” were all adjectives used by players and coaches of the Minnesota Wild after their 4-3 loss to the New Jersey Devils on Tuesday night.  With the Wild’s latest opponent, a team in a similar place in their respective standings in the Arizona Coyotes arriving to St. Paul no doubt Minnesota will be on guard to not have a repeat performance.  The Coyotes are a team biding its time, bottoming out so it can be power house in the future or at least that’s what their General Manager John Chayka hopes.

Chayka hopes that current miseries lead to future success with a model similar to that of the Toronto Maple Leafs.  The fact Chayka is an analytics guru only adds more visibility to this latest Coyotes’ rebuilding effort.  Will the Wild find themselves trapped again by the Desert Dogs or will they leave the Coyotes howling?

1st Period Thoughts:   The game had a bit more of a cautious vibe to it as both clubs seemed wary of making the first mistake.  Initially the Wild who were sporting a variety of new forward combinations were struggling to connect a bit on their passes as you saw a lot of pucks going to the back skate instead of to the tape.  Minnesota would take an early lead as Eric Staal took a pass from Nino Niederreiter and raced into the Coyotes’ zone for a 2-on-1 with Charlie Coyle and with the lone Coyotes defender uncommitted took his chance to fire the puck and he found the back of the net as Louis Domingue was caught way out of position somehow.  1-0 Wild.  Minnesota seemed to relax a bit and the Coyotes were not exactly peppering Devan Dubnyk with shots but the Wild almost appeared to want to defend their lead than to really add to it.  Zach Parise would drop a pass back to Jordan Schroeder who rang a shot off the crossbar and out.  A few minutes later Arizona would counter attack and Brendan Perlini was able to get a step on Nate Prosser and he’d rifle a shot by Dubnyk tying the game at 1-1 and making the sellout crowd think “here we go again.”  Fortunately the Coyotes would take a tripping penalty shortly after Perlini’s goal and the Wild would strike on the man advantage as Mikko Koivu worked the puck down low and then passed it out front to Niederreiter who one-timed a shot 5-hole by Domingue.  2-1 Wild.  It was a nice answer to Perlin’s tally and the Wild had to feel good going into the 1st intermission with a lead.  Still, its a 1-goal lead and they know how well that stood up against New Jersey on Tuesday.  The Coyle, Staal, Niederreiter line already looks considerably more dangerous now that they’ve been reunited.

2nd Period Thoughts:  A few weeks ago my wife surprised me and the guys at 3 in the Box with this horrible double zoot Netherlands’ black licorice that made a salt lick seem sweet.  That nastiness was about how I felt after watching the 2nd period as the Wild seemed to go into hibernation for most of the period.  Minnesota relaxed and the ice would tilt in the Wild zone and while the Coyotes were not creating a ton of great offensive chances it was all due to lazy passing that led to a number of weak turnovers in the neutral zone.  Devan Dubnyk was doing well enough to hold the fort but that would change by the period’s end.  Minnesota almost got bailed out for its sleepwalking ways when Chris Stewart scored his 10th goal of the year on a nice little backhander that beat Domingue 5-hole extending the Wild’s lead to two, 3-1 with less than 4 minutes left.  The Wild must’ve felt they had done enough to win the game because the Coyotes assaulted the Wild zone and they’d score 15 seconds late as Jake Chychrun hammered a slap shot that beat Dubnyk who was accidentally screened by Stewart.  3-2 Wild.  Arizona continued to hustle and win races to loose pucks and Jamie McGinn would bury the equalizer just 30 seconds after Chychrun’s tally as he swept up a puck near the wall and he fired a shot that beat Dubnyk cleanly.  3-3 game to stunned and anxious boo’s from the home crowd.  The goal seemed to embolden the Coyotes and towards the end the frustration from the Wild against their upstart opponent would boil over in an after the whistle scuffle.  Jason Zucker would head to the box while Laurent Dauphin and Luke Schenn ended up in the box for the Coyotes giving Minnesota a power play.  Unfortunately, a lazy play by Zach Parise would even it up just about 20 seconds into the Wild man advantage as he reached and weakly hauled down Alex Goligoski.  It was a sad ending to what was a mostly lethargic 2nd period for the Wild.  Minnesota let the Coyotes hang around and believe they were still in the game which is the same recipe for disaster they had against New Jersey.

3rd Period Thoughts:  With the game tied at 3-3, the feisty play after whistle continued as both teams were chirping a lot.  Eventually the chirping would boil over as Chris Stewart dropped the gloves with Lawson Crouse who had been yapping quite a bit and the Wild pugilist would teach the youngster a lesson as he landed several punches as Crouse turned his face away to avoid getting tagged too hard.  Crouse wasn’t even trying to throw punches, simply hoping to stay as far out of reach as he could as Stewart tried switching up and change his angle as he kept throwing punches and it was a clear win for Stewart.  The fight appeared to get the Wild skating with a bit more jump and they’d draw a hooking call on Shane Doan.  On the man advantage the Wild worked the puck around the perimeter before getting the puck to Granlund who made a nice slap pass to the slot for a perfect redirection by Niederreiter to give Minnesota a 4-3 lead.  Now that the Wild had the lead I think everyone in the building was fearing the team would relax and then get ambushed by the Coyotes like they were in the 2nd period but Minnesota’s defense was stout and they did a good job in around Dubnyk.  Minnesota was doing the little things to disrupt the Coyotes attempts for the equalizer and they’d escape with a 4-3 win.

Devan Dubnyk was reasonable, making 20 saves in the game but I thought he was a little suspect tonight in his ability to track the puck.  Although, this is a game the Wild should’ve been able to play Kuemper but his unreliability forced the Wild’s hand to want to continue to pile up the points.  Defensively I thought Jared Spurgeon and Ryan Suter were tremendous.  I thought Nate Prosser struggled with some of the speed of the game.  The penalty kill went a perfect 2-for-2 but they weren’t tested that much.

Offensively the Wild got a big night from Nino Niederreiter with 2 goals and an assist but the other stud was Jason Pominville who finished the game with 3 helpers of his own.  Pominville has had another tough season, but he made the most of working the point on the power play tonight.  Is it perfect, probably not, but in the absence of Brodin its he the best for right now.  The Eric Staal, Charlie Coyle, Nino Niederreiter line had some good pressure early in the game but it got switched up a bit by game’s end.  Mikael Granlund also had a great game and his set up of Niederreiter’s redirection was just filthy.

I know there has been a lot of criticism of fighting, but Stewart’s fight to me made a difference in the way the team played after his decisive victory.  The Wild seemed to play with more confidence and more urgency at a time where it was kind of in a lull.  That increased effort led to drawing a penalty that set up the game winning goal.  Should we be happy as hell we beat the Coyotes, not really but the team found a way to come away with 2 points which is really all that matters.  They have another tough back-to-back weekend ahead with games against the Ducks and Predators.

The injury depleted Iowa Wild, who were without Alex Tuch and Grayson Downing were battling one of the best clubs in the American Hockey League in the Grand Rapids Griffins in a home tilt at Des Moines’ Wells Fargo Arena.  Alex Stalock was a wall stopping all 23 shots he faced through the first two periods.  Equally tough was the Griffins Cal Heeter who had manage to stymie all 18 of the Wild’s shots.  It wasn’t until the 3rd period when the stalemate was finally broken when on the power play, Gustav Olofsson beat Heeter with a snap shot from the point.  A few minutes later it was Sam Anas skating in from about the right faceoff dot before ripping a snap shot by Heeter giving Iowa a 2-0 lead.  Unfortunately that was all the offense the Wild could muster as the Griffins cut the lead in half on a tap in shot from in close by Tyler Bertuzzi that just crossed over the goal line before Stalock could reach it.  Grand Rapids would tie the game late in the period as former Wisconsin Badger Ben Street swept up a puck and fired it top shelf over Stalock tying the game at 2-2.  An ill-timed slashing penalty to Mike Reilly late in the game nearly turned into disaster as the Wild needed all the skill Stalock could muster to send the game to overtime.  In overtime there was a bizarre holding the stick penalty on Stalock that put the Wild a man down and that’s all the Griffins needed as Martin Frk blasted a one-timer by the embattled Iowa goalie to seal a 3-2 win.  Stalock had 37 saves in the loss.

LW – Kirill Kaprizov (Salavat Yulaev Ufa, KHL) ~ the skilled Russian winger continues to climb towards the KHL record book for points as a 19-year old as he contributed 4 assists in Salvat Yulaev’s 6-5 OT loss to Ak Bars Kazan on Wednesday.  Kaprizov has 17 goals, 39 points, 64 PIM’s and is a in 41 games.

LW – Jordan Greenway (Boston U., H-East) ~ the big winger played like a man among boys at the World Junior Championships for Team USA and he continued his strong season with a 2 assist game in a 3-0 win for the Terriers over arch-rival Boston College on Monday.  Greenway has 6 goals, 20 points, 42 PIM’s and is a +6 in 19 games.