The Sabres at Midseason: What’s Happened and What’s Next by @evancdent 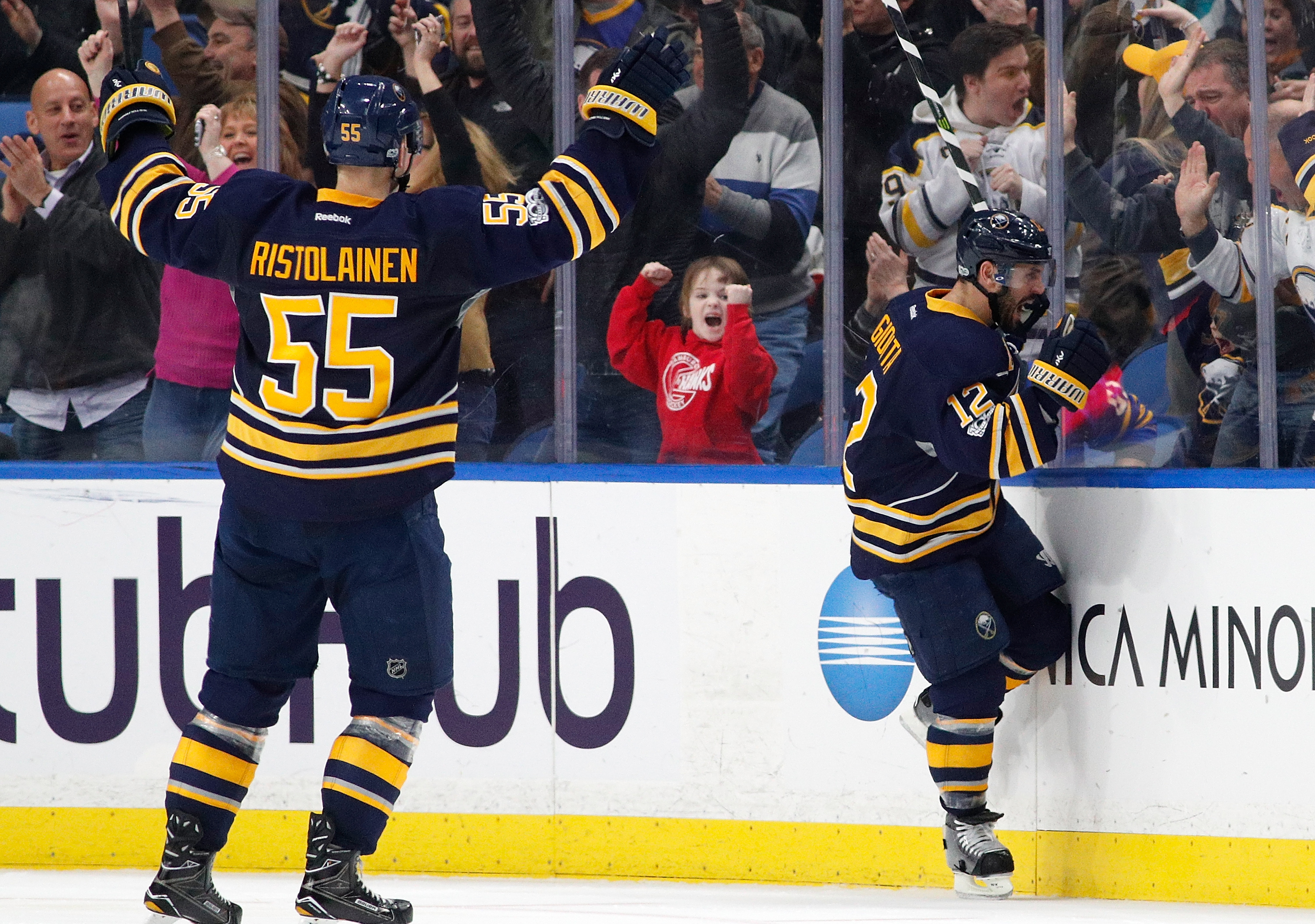 The Sabres at Midseason: What’s Happened and What’s Next by @evancdent

Coming off last night’s dispiriting loss to the Maple Leafs (who, the media are quick to point out, are better at Rebuilding), let’s take a look at the how various Sabres have fared over the first half of the season.

Sabres twitter treats every stretch of play, every game, as a referendum on the past, present, and future of the team. They drop 3 games in a row? We didn’t tank right, the players hate Bylsma, his system is terrible, what the hell has Tim Murray done, and we’re never getting better. The Sabres string together a couple wins? The tank was worth it, they can make a playoff run with just a couple more wins, Murray sure has brought in some talent, and Jack Eichel is bae. Maddeningly, the Sabres have decided to alternate win and loss streaks seemingly week by week, so the wind shifts online have been as dramatic as in the Bermuda triangle.

I’ve completely resigned myself to the Sabres’ inconsistency, and expect they’ll keep doing the same thing for the rest of the season, finishing somewhere around 35-35-12, just about what they were last year. No playoff run, no outright tank, just somewhere in that mushy middle, a place you don’t want to stay in for long. It’s time to readjust expectations, Sabres fans – let’s remember not to get too high or too low.

Sabres fans have increasingly begun to sound more and more like hippies from the 1960s, loudly decrying The System, their amorphous term for what Dan Bylsma is doing tactically. His breakout plan seems to favor long stretch passes from his D to forwards in the neutral zone, but 1) other teams have figured this out, and 2) the team doesn’t have the right defense corps to do it. And his penalty kill setup has been awful – the Sabres rank dead last in the league at PK% according to NHL.com.

Altogether, the team just looks slow, seemingly a combination of his system’s shortcomings and the roster’s shortcomings. Bylsma would be smart to make some tweaks to his system – even notorious dinosaur John Tortorella has adapted his methods, and the Blue Jackets are doing very well – but whether he’s too stubborn to or hasn’t had the practice time to implement changes, we haven’t seen anything yet. Here’s hoping.

Tim Murray: Running out of rope

Tim Murray certainly had some detractors after the tank year, but after his trade for Ryan O’Reilly and the jubilation of getting Jack Eichel, he was certainly very popular around town. He gave funny answers in press conferences, acknowledged advanced stats, and looked as if he had the rebuild on a fast track. But as the fans have found out, it’s not easy to go from the tank roster to a playoff roster. (The Sabres roster in 2014 was, by any objective measure and many subjective measures, much worse than the Leafs’ 2015 roster, which I think explains the difference between their respective rebuilds.) Murray never promised that the team would be in playoff contention by now, but it certainly had to be his goal to improve every season.

This year, however, the Sabres are stuck in a holding pattern, having made the big jump from the basement to 80-some points, but unable to break through to the next step. While probably frustrating for him personally, the fans and the media, in their vexation, have put Murray on some thin ice. The honeymoon is over. A more dispassionate view of his transactions is taking over. Acquiring Ryan O’Reilly and Kyle Okposo were good moves. Trading a 1st for Lehner and trading Pysyk for Kulikov were bad moves. The Winnipeg trade is something of a wash – Evander Kane is good (ON THE ICE) and Zach Bogosian is not very good. The point is, there’s a general consensus on Murray’s moves, and the people want more. Anyone watching the team knows there’s plenty of work to be done, and they need more proof that Murray is going to do that successfully. No pressure, Tim.

Simply put: Rasmus Ristolainen and Jake McCabe are the Sabres’ good defenders. (And both need to work on their possession skills.) The rest have bigger question marks, whether it’s health, age, or overall skill. We know for sure that Bogosian, Franson, Gorges and Kulikov aren’t cutting it. To break through to playoff contention, the Sabres, plain and simple, need to massively upgrade their defensive corps. Brendan Guhle looks like he can step in next year and play a decent role, but he can only fill one of those gaps, and you can’t always expect young defensemen to immediately play a big role.

The rest of the prospect pool is thin beyond Guhle; Will Borgen and Casey Fitzgerald have shown flashes but are far from sure things. So, either at the trade deadline or during the offseason, Murray has to upgrade. Whether that means going after a big fish like the Blues’ Kevin Shattenkirk (which would require some future cap finagling) or prying a guy from a team before the expansion draft, something has to be done: the current situation is untenable.

Since coming back from injury, Eichel has looked like a special player in nearly every game he’s played. (Some of his inconsistency could be explained by coming back from his high ankle sprain; also, he’s a young player, who can’t be perfect every game.) There’s one big problem, though: his linemates. It seems as if every game, Eichel dishes out a beautiful pass that one of his stonehanded wingers cannot corral.

Brian Gionta, though surprisingly useful this season, should not be on Jack’s line. Neither should Matt Moulson. Bylsma’s latest gambit is putting Foligno on Eichel’s wing, and, guess what – it doesn’t work. Once Tyler Ennis comes back fully, Eichel should be on a true top-6 line, playing with players like Reinhart and Kane. In fact, those three made up a pretty successful line last year. Just a thought, Coach – put your star in a position to succeed. In the future, I hope Alexander Nylander will be put on Jack’s line, and the team can spread the talent of Reinhart or Kane onto another line. But until then, make it work!

Sam Reinhart gets a lot of gruff for his skating and general lack of flair. But guess what – he just gets points, due to his highly advanced passing and hockey sense. He just knows where to be on the ice, and it’s been showing over the past month or so. While the mouth breathers may never appreciate him, he looks like he’ll be a good player for a long time.

A simple lineup choice would improve the Sabres forwards night in, night out: scratch Nic Deslauriers. I’d rather have an AHLer getting his 4th line shift.

Okposo and O’Reilly: Worth the Money

Working the free agent market can be perilous, but Kyle Okposo has been, so far, playing up to his contract. Though maybe not the most exciting choice for the All Star game, he certainly deserves to be Buffalo’s representative. O’Reilly, when healthy, has been his usual, excellent self. Murray, for all his shortcomings, has given Buffalo two very good centers, which can be the hardest thing for teams to find.

Gionta and Moulson: Not Half Bad

Two of Sabres fans’ least favorites have shown themselves to be … half useful? While their skating leaves something to be desired, both have brought some nice secondary scoring to the team. Moulson’s contract is still bad, though.

With Johan Larsson out, Zegmus has gotten more playing time, and so far, the results have been… well, more of the same. He has his flashes here and there, but he disappears for long stretches, and his hands aren’t nearly as good as he thinks they are. I’d cut bait after this season.

Talking about the goalies this year has become something of a minefield. The price given up to acquire Lehner has made him a target for criticism, and Anders Nilsson’s play has increased the pressure on Lehner. I don’t think either of them are full time, top half of the league starters – which looks pretty bad for Murray, seeing as he gave up a 1st for Lehner – and the Sabres would do well to plan around their inconsistency. That means not playing them on back to backs (neither of them can handle it) and otherwise riding the hot hand. At the beginning of the year, neither was getting good goal support (especially Lehner), but now, both have shown to have their flaws. I think the search will continue past this season, but, hey, maybe one of them can prove me wrong over the back half of the season.

I’ll finish on that note. The only reason to keep watching is to see if some of these players can surprise you, can make a case for being part of the long term solution in Buffalo. I’ll believe a playoff push when I see it, but I’m betting that they continue their up and down ways. So, for the rest of the season, I’m watching to see if someone steps up at goalie; to see if Jack Eichel can keep elevating his play: to see if Ristolainen and McCabe can become more complete defenders; to see what line combinations start to work over time; to see if Tim Murray will make any in-season moves; and to see whether Dan Bylsma has any more tricks up his sleeve, or whether he goes down with his system. It’s not what we wanted from this season – I’d much rather be discussing a thrilling playoff chase – but it’s what we’ve got.