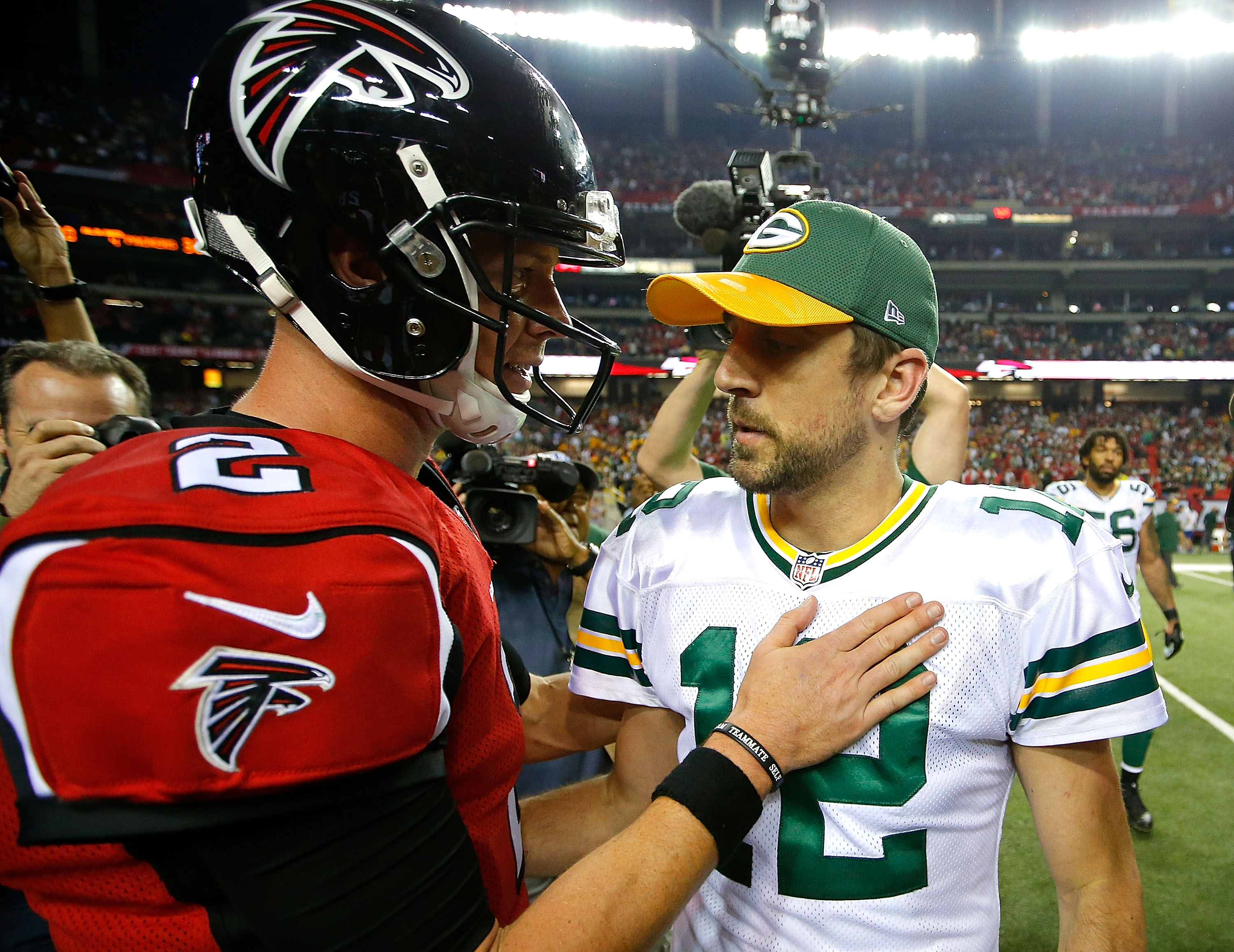 The NFC Championship game will feature two of the games hottest quarterbacks in the league right now- Aaron Rodgers and Matt Ryan.

This is a juicy matchup that was won earlier in the regular season by Atlanta, a 33-32 shootout in which both Rodgers and Ryan combined to throw for over 500 yards and 7 touchdowns, and much of the same is expected today too.

We’ll see whether that holds true, but one thing is certain, take both of these QBs out of the equation, and neither team is playing today for the right to go to the Super Bowl.

As far as today goes, there’s a couple of interesting storylines for both quarterbacks.

1- Aaron Rodgers and the Packers are on FIRE. The Packers have won eight games in a row and Rodgers has tossed 21 touchdowns passes during that span.

2- Green Bay is beat up. That’s an understatement, big time. They’ve got three receivers playing under the questionable tag today, including one with broken ribs, their starting running back is a wide receiver, and their secondary is hurting. And yet, despite all that, here Green Bay sits, 60 minutes away from a Super Bowl.

3- Atlanta somewhat struggles at home. They finished 5-3 (6-2 on the road), and their largest margin of victory, was against the 49ers. In fact, their three biggest wins at home were against the NFC West (28 against SF, 19 against Arizona, 16 against Seattle last week).

4- Julio Jones needs to be on the field for Matt Ryan to succeed. Without Julio, the Packers defense can key on the rest of his receivers, but with Julio, Ryan is allowed to spread the ball around, which he did fairly well. Of the 38 touchdown passes Ryan threw, only 6 went to Julio, however, of the 4,944 yards thrown, Jones caught almost 30% of that with 1,409 yards. Bottom line, Julio needs to be on the field Sunday.

5- Atlanta’s two running backs could key their victory. Green Bay played a non-existent running game in New York, and a single, three-down back against Dallas. Against Atlanta, they’ll face a two headed monster in Devonte Freeman and Tevin Coleman who combined for 1,600 yards rushing and 19 touchdowns. That doesn’t include another 900 yards receiving and 5 touchdowns.

All in all, this should be a really good game, and I’ve picked Green Bay to the go the Super Bowl the last three years, but Atlanta is another beast. I really believe the Falcons running game will be the key to the game. I’ll take a healthy Packers team over Atlanta any day of the week, but a team that’s beat-up like this, at some point, injuries catch up, and I think today’s that day.