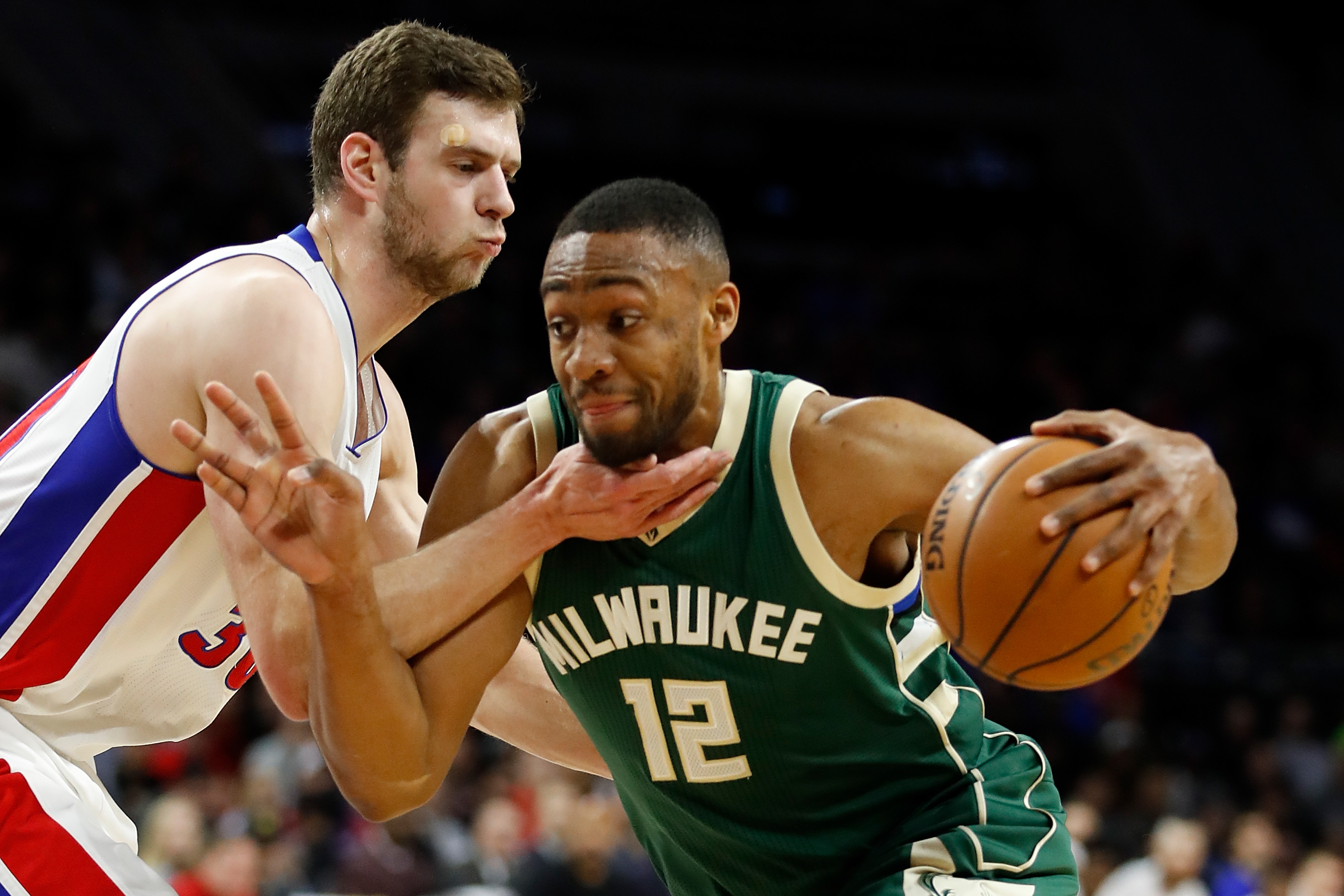 The All-Star game is on the horizon, the starters set in stone.

For this roundtable, mafia members were permitted to pick any seven players (besides Giannis Antetokounmpo) among the seven non-playoff teams in the East and any seven players outside of the top seven squads in the West (besides Anthony Davis).

Jon Elliot: Embiid is seventh in the NBA in per-36 scoring and tied for the best average in blocks. He also tops the league in trolling on Twitter, which has to count for something.

Gabe Allen: I’ll go ahead and suggest that JoJo should have earned the final frontcourt spot over Kevin Love.

Matt Sexton: I thought I was trying to stay awoke. You know, some people, they kind of wear on you.

Jon: Parker is a good candidate for Most Improved Player of the Year. Sporting the highest three-point percentage, three-point makes and attempts, rebounds, assists, and points per game of his three-year career, he’s finally ascended to what most believed he could become – a budding All-Star. If some Greek kid weren’t on this team, he’d be getting a lot more attention.

G: Jabari Parker: Parker is looking better on both ends, sinking above-the-break threes with ease while defending much better than before.

Josh: While Giannis Antetokounmpo is deservedly starting in the real All-Star game, Parker deserves to be recognized for the Lottery All-Star squad. He is scoring efficiently, learning how to pass after a lifetime of being a pure scorer, and working hard on his defense and rebounding. Recent punishment aside, he is a key part of a Bucks team on the rise.

M: because he’s obviously not welcome in the Milwaukee lockerroom.

Jon: Cousins is posting his best year ever, which is saying a lot for a center with his talent and resumé. He’s also likely on the way out unless the new CBA entices him into signing his life away in the dysfunction that is Sac-town. However, nobody can ignore that the man is fifth in the league in scoring. That’s ahead of DeMar Derozan, Kevin Durant, LeBron James, Steph Curry, and Damian Lillard. You can’t not invite him to New Orleans this year.

G: If the Sacramento Kings make the playoffs, Boogie should win MVP.

Josh: Monstrous numbers for the big man, who is carrying the entire load for a Sacramento roster bereft of any talent whatsoever.

M: He has been so nice to referees lately. Give the man a reward.

Jon: Jokic is seventh in True Shooting Percentage, fifth in field-goal percentage, and 10th in PER. He’s shooting nearly 38 percent from three. He’s also 21. This kid is a stud that may not be in Denver in 10 years, but he will be an All-Star caliber player for years to come.

G: Denver is the frontrunner for the eighth seed in the West, and it all starts with Jokic.

Josh: One of the most gifted passers in the league, Jokic plays center. His election to the starting lineup has unlocked Denver’s recent offensive surge.

M: This was a bit optimistic, but Nikola and the Nuggets are still awesome nonetheless.

G: While Minnesota may be a season (or two) away from making a playoff run, KAT was already worthy of All-Star consideration last year.

Josh: Is it a disappointment that Towns is simply really good and not an MVP candidate in his second season? Great offensive skillset even if the defensive instincts will take time.

Jon: There’s just no way he gets snubbed again. I could go over the stats (26 points, six assists, and five boards per with a 23 PER), but seriously, can’t we all agree? There’s NO WAY he can get snubbed twice in a row, right?

G: The puzzle pieces don’t appear to fit in Portland, but Lillard could still propel the Trail Blazers into the playoffs.

Jon: The Pippen to Dame’s Jordan, C.J. has played nearly as well as Lillard this year. He has improved his field-goal and free-throw percentages and maintained his three-point percentage, putting him close to a 50/40/90 season. All that with a career-high in usage. Pretty darn efficient.

G: Like last year, C.J. exploded when Dame went down with an injury. The small backcourt pairing may not work out long-term, but it’s not really their fault.

Josh: Don’t look now, but McCollum is doing almost exactly what Lillard is doing! The best offensive backcourt outside of San Francisco.

Jon: He’s not the hero that Gotham deserves (see booing at draft), but he is the hero that Gotham needs. He’s also shooting 45/39/79 on the season and is the only one on the Knicks starting roster that can play a high level (or any level aside from Courtney Lee) of defense.

G: Zinger has shown improvement this season despite dealing with injuries and playing for a pretty dysfunctional squad.

M: New York fans need something. ANYTHING. And up until now they’ve illogically refused to play him at the five-spot.

Jon: This has to be a renaissance year for three-point shooting. Everyone seems to be enjoying their career-high year from downtown. Dragic is no exception. He’s subtly averaging nearly 20 points, six dimes, and four boards on 41 percent shooting behind the arc. Luckily, the All-Star game is about individual accolades more than the MVP race is; otherwise, Dragic and Whiteside would have no chance here.

G: At his best, the Dragon is still incredibly dangerous on offense. Hopefully he has a couple more years like this left in him.

Josh: The Heat are injury-stricken and paper thin, but they’re riding a three-game winning streak because of their two All-Star caliber players. Dragic may find himself moving at the deadline, but until then he is balling out for a doomed Miami squad.

Josh: The Nets are abysmal, and are on track to hand the No. 1 pick to the Boston Celtics. But Brook has embraced coach Kenny Atkinson’s analytical system, and is launching – and making – a ton of three-pointers. While the rest of the team drags in the mud, Lopez is making a case for a team to trade for him.

M: because he’s arguably the most underrated big man in the NBA.

Jon: In an age of small-ball lineups, I suggest we go big in this lottery edition of the All-Star team. Whiteside is leading the league in rebounding and he’s fifth in blocks per game. Ignoring his lack of true defensive prowess and his declining efficiency all-around as his usage rate has risen, Hassan has done enough to give Miami fans a reason to still act as if they are interested in basketball until their next superstar arrives.

G: He has had his ups and downs in year one as the franchise cornerstone, but the future in South Beach is still bright because of him.

Josh: Again, the Miami Heat have the second-worst win percentage in the league. But Hassan Whiteside has gobbled up every rebound in sight, is blocking shots, and slowly showing progress with his offensive repertoire. Whether Miami builds around him moving forward or trades him, he has a solid career ahead of him.

Jon: This was a tough choice between Wiggins and Barnes, but Barnes has displayed the better defensive IQ and rebounding ability, plus his shooting is better at each level. Barnes is definitely another candidate for Most Improved Player after nearly doubling his points per game from last season while playing only five more minutes a night. He’s also had a career-high in PER and usage without drastically increasing his turnovers. He makes Dallas watchable at times outside of Dirk doin’ Dirk.

Josh: Harrison Barnes: Perhaps an unpopular pick, but Barnes is shouldering a tremendous two-way burden for a Mavericks team angling back towards playoff positioning, and standing up well under the pressure.

M: Honestly, who saw this coming…? He’s gonna be in the bottom of the barrel for a while with Dallas, so lets at least give the man a stage to make up for the other 364 days when no one is looking at the Mavericks.

Jon: Drummond has the highest rebound rate in the league. He doesn’t really thrill me in any other area, except free-throw shooting (career-high 43 percent so far!) and the fact that he excels specifically on the offensive side of the glass. With that being said, Drummond is definitely deserving.

G: The Pistons have disappointed, but Andre the giant is still among the best centers in the league.

G: Bledsoe has been brilliant, albeit for the struggling Suns. It’s fun when really good players stay healthy.

Josh: Somehow the media is sleeping on the trade the Warriors made, sending Curry to the Mavericks (perhaps for Andrew Bogut, who has been mysteriously M.I.A. recently). He’s averaging modest numbers for the Mavericks, but he did start and shoot 6-8 in Dallas’ 122-73 rout of the Lakers on Sunday…….Apparently Steph Curry has a younger brother who is now starting for the Dallas Mavericks. My bad. I now change my pick to Eric Bledsoe, who is putting up two-way numbers for the Suns and just dropped 40 on the Toronto Raptors.

And Then There Was One – Dissenting Votes & Matt’s Peanut Gallery

Jeremy Lin: I wanted to put Reggie Jackson or Elfrid Payton here, but Jeremy Lin just has been better all-around than both this year. Clearly, he hasn’t meant as much to his team considering he’s only played in 12 games due to recurring injuries, but consider this: Jackson has only played in 24 games. Payton has played in 45, but has only started 56 percent of those. Plus, everyone loves Lin and we’re trying to make this thing work globally. Harvard wins here.

Zach LaVine: After averaging almost 23 points per contest in December, LaVine seems to have settled in as the third option on the Young Wolves. Plus, who doesn’t want to see an in-game dunk-off between Zach and Giannis?

Jrue Holiday: He has been struggling lately, but New Orleans is still 15-14 with Jrue in the lineup compared to 2-13 without him.

Kentavius Caldwell-Pope: One of the league’s best on-ball defenders, “KCP” has been the primary source of perimeter defense and offensive shooting. For a disappointing Detroit team, Caldwell-Pope has been a bright spot, and both Detroit and NBA fans hopes he returns soon.

Serge Ibaka: While the rest of the Orlando frontcourt struggles, Ibaka has spread his offensive wings without Durant and Westbrook there to take all the shots.

Reggie Jackson: One of the most vivacious members of a surprisingly not-yet-good Detroit squad. Don’t ask me what vivacious means.

Mario Hezonja: because for the love of god, can we finally watch him play???!

Dragan Bender: because I have yet to see someone in the NBA with as cool a name.

Larry Nance Jr. Those off-the-backboard passes are far too tantalizing to not be involved in All-Star weekend. Plus, reunited with his grandson Brook Lopez. I will be expecting fireworks.

D’Angelo Russell: because I really wanna see another pop star have their wedding broken up.

Nick Young: because I wanna see what Swaggy does when the aforementioned happens. Plus he’s actually been really efficient this year! He should think about pulling a Rondo and taking off the second half of the season to preserve those percentages.