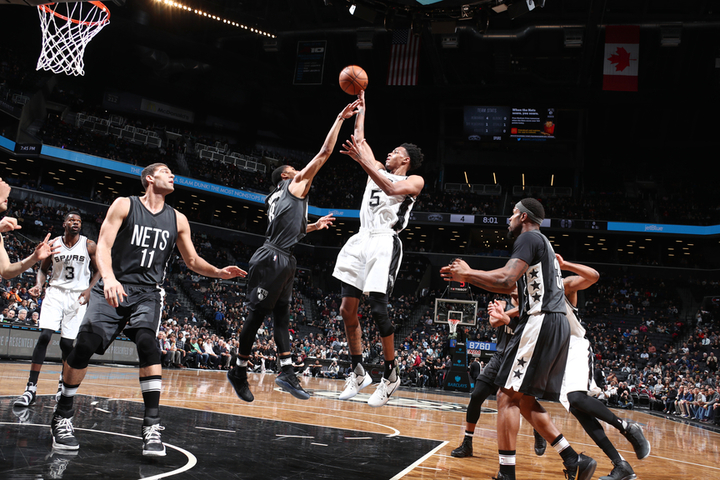 The San Antonio Spurs were missing a lot of star power on Monday night in Brooklyn, but that did not stop them from shining. It was a total team effort from the guys that did play, and seven of them scored in double figures in the 112-86 rout of the Nets.

Kawhi Leonard had scored 30 points or more in six straight games headed into Monday night’s game in Brooklyn, but it hasn’t been all roses for the silver and black. Pau Gasol broke a bone in his hand during a pre-game layup line against Minnesota, and Tony Parker missed that game and the win over Cleveland with pain in his left foot. Manu Ginobili left that game with back spasms, and he didn’t play against the Nets along with the rest of the 34 and over club.

San Antonio only plays in New York twice a year, so it was very disappointing for fans when Kawhi Leonard was scratched an hour before tip out of an abundance of caution for his sore hand that he dinged up against the Cavaliers. He probably could have gotten a rest night even with a fully healthy klaw because the Nets are categorically terrible.

On the bright side, the wide open starting lineup gave the many Spurs fans in the arena a chance to see exciting young players like Jonathon Simmons, Davis Bertans, Dewayne Dedmon, and Dejounte Murray up close.

The first few minutes of play wasn’t very pretty at all, as ball movement was an issue for a group of players that hadn’t played together much. The offense was centered around feeding LaMarcus Aldridge in the post, and he struggled to create offense for himself in that setup. However, did create shots for teammates out of the post.

LaMarcus draws a double on the post up, kicks to Danny Green for a Tar Heel Triple pic.twitter.com/H4VoNlemTh

Now Kyle Anderson benefits from an LMA post up and dime pic.twitter.com/wjFbt4taBc

LMA finished with 16 points, 9 rebounds, 5 assists, 2 steals and 2 blocks. It was a decent game for the big man all around, but it was a below average scoring night as the primary option on offense against a woeful opponent. His jump shot just wasn’t falling, especially the isolation fadeaway that’s usually money. Aldridge was at his best in this contest when he attacked the rim, as he was 5/5 in the restricted area and 3/14 from everywhere else.

LaMarcus has struggled from the floor tonight, but gets the bucket with some nice footwork here pic.twitter.com/haZMzi2NN7

LMA is a bully in the post when he wants to be pic.twitter.com/aqkQHQszGx

Danny Green led all scorers with 9 points in the first quarter, and he even drove to his left and finished a tough layup off the glass with his off hand. Green has been working on this part of his game to discourage defenders from closing out aggressively, and his ability to attack the rim seems to be improving. He didn’t score after the first quarter, but it didn’t matter.

Dewayne Dedmon put up double digit scoring in his third start as a Spur, notching 10 points and 8 rebounds. The athletic 7 footer showed off some skill, hitting an elbow jumper and getting a layup to go after a crafty mid air adjustment. His skills are even more impressive considering he didn’t start playing organized basketball until he was 18.

Have I mentioned that @d_dedmon3 has mad skills for a 7 footer pic.twitter.com/u99ejzoX9p

After two excellent starts in a row, 20 year old Dejounte Murray didn’t have a great showing in Brooklyn with just 4 points and 2 assists, although the 6’5” point guard did pull down 6 rebounds. On the other hand, Patty Mills put up a game high 20 points after a slow start. Once he entered the game in the first quarter along with David Lee, the Spurs started to play some beautiful basketball.

Lee has been huge for the Spurs as the backup power forward, and he put up 10 points and grabbed 7 boards in this one. He did most of his work in the restricted area, finishing with crafty layups and hammer dunks.

Davis Bertans dropped a nice dime on that dunk in the middle of a gorgeous play, and he finished the game with 11 points of his own, mostly from beyond the arc.

Jonathon Simmons was another Spur who tallied double figure scoring, and all of his made field goals were jumpers from 17 feet away or more, which is unusual for the explosive slasher and dunker. Simmons paid to try out for the Austin Spurs at one point, and if it didn’t work out he probably would have become a barber to support his family. Now he’s contributing to a championship contender, and he might even compete in the dunk contest this year.

Juice is dumb slick, if he gets this shot down he's getting big bucks this summer pic.twitter.com/pYwXTJotPZ

Our Paul Garcia has been saying all year that Juice will be able to cash in as a free agent this summer if he’s able to demonstrate proficiency with that jump shot, especially from 3 point range. He’s shooting 31.5% from beyond the arc right now which is a bit below league average, but he’s looked sharp from distance of late. Consistency in that part of his game will be important to watch in the latter half of the season.

Kyle Anderson hasn’t been playing that much this season, partially because of the effectiveness of Lee, Simmons and Bertans. Slo-mo got the start at small forward against Brooklyn, and the New Jersey native put together a solid game on both ends of the floor. Early in the third quarter, he casually strolled to the rim for a layup on three consecutive possessions.

Why do they call this guy Slo-mo? Really don't get it. pic.twitter.com/eIUWVJDuu9

Kyle is from New Jersey, so the Andersons probably got tickets to the gamehttps://t.co/q0P7SjNBdF

It was a weird night for the Spurs who were missing 3 key scorers from the starting lineup. They compensated by spreading that scoring load amongst the entire team in true Spurs fashion, and that beautiful basketball led to a commanding victory. San Antonio is great when all their stars are healthy, and they’ve shown that they can still dominate without them. Well, against the Nets at least. 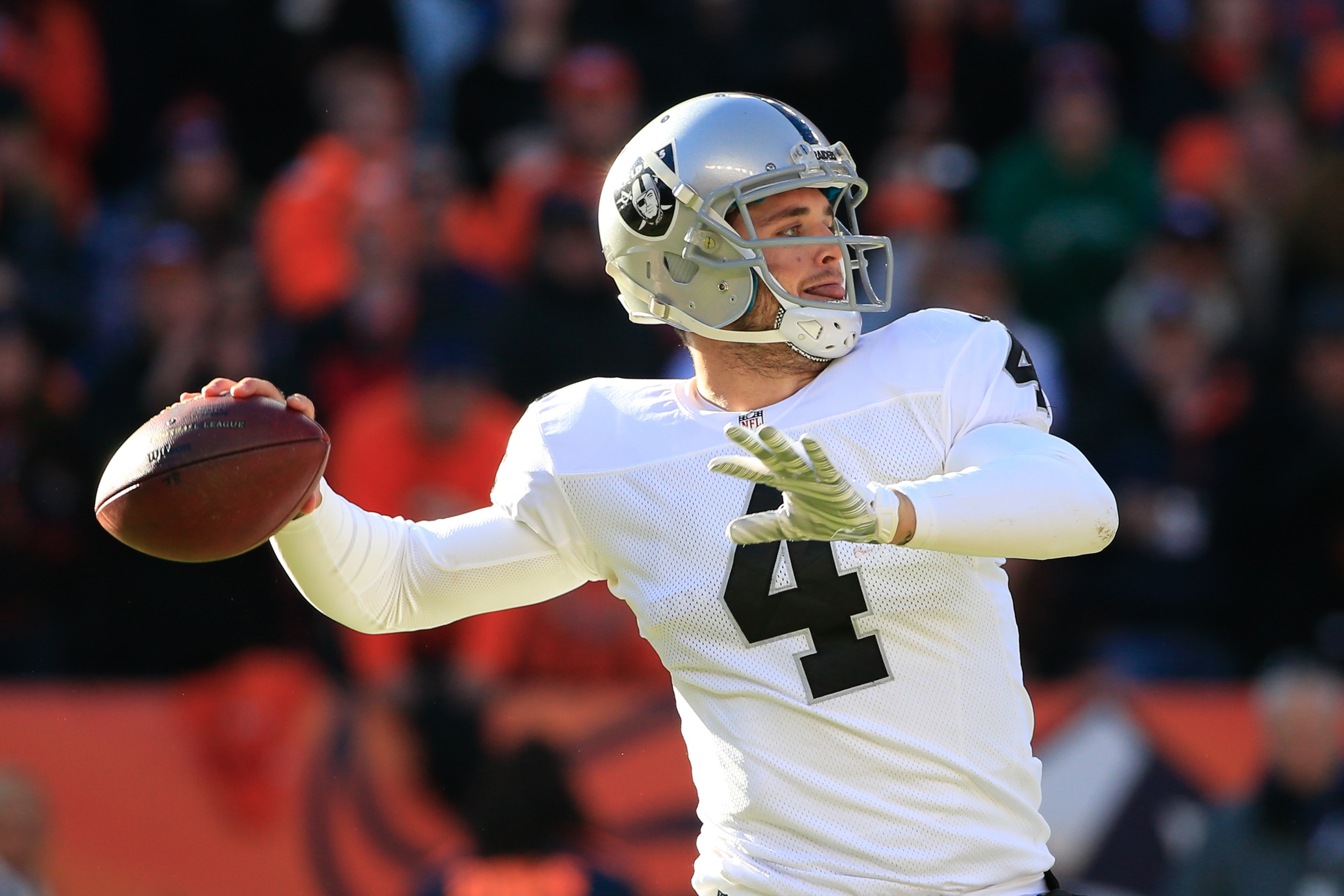 Raiders ready to get contract extension done with Derek Carr

The Oakland Raiders could have franchise quarterback Derek Carr signed to a new contract by the end of this offseason. General manager Reggie McKenzie has...