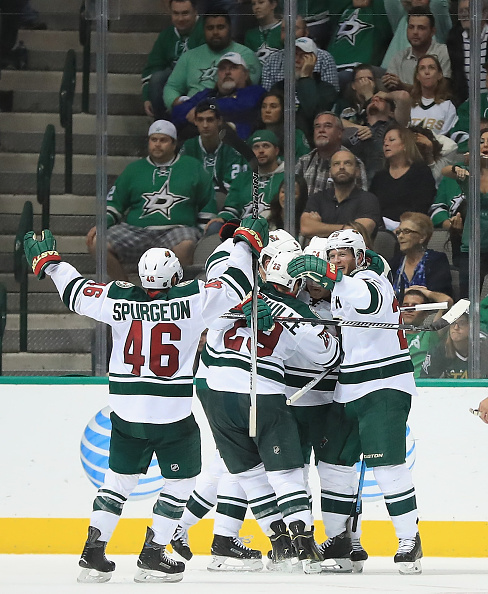 Frustration is something everyone deals with.  It can be ‘just one of those days’ where small doses of misfortune seem to accumulate to the point where you need an adult beverage when you get home.  I think everyone could sense Minnesota Wild Head Coach Bruce Boudreau‘s frustration level as he spoke after Sunday’s loss to the Nashville Predators; especially when the issue of his backup goaltender was brought up.

‘Don’t go there’, seemed to be an applicable phrase to describe the look that came over his face.  I am sure there is a level of frustration with the Dallas Stars as well who have only won 3 games out of their last 10.  So with a pair of frustrated teams coming to Dallas, who will put that behind them and who will add to their list of reasons to be upset?

1st Period Thoughts:  The pace was fast and yet under control throughout most of the 1st period.  Both clubs were looking to use its speed to get a step on their opponents’ defense but gap control was terrific and time and space was hard to come by.  Mikko Koivu‘s return was immediately evident as Jason Zucker and Mikael Granlund could go back to their puck-hawking ways and the line was giving Dallas fits and causing a number of turnovers.  The Stars would earn the first power play of the game as Marco Scandella was tagged for hooking Jamie Benn.  The Wild’s penalty kill was superb with great positioning to deny passing and shooting lanes.  Devan Dubnyk didn’t have much work at all as Minnesota was able to kill it off.  The successful killed penalty appeared to give the Wild some momentum, and Minnesota started to put the Stars on its heels.  It started with the Eric Staal, Nino Niederreiter, Charlie Coyle line outhustling Dallas to loose pucks and cycling the puck a bit.  A few minutes later it was a missed Dallas shot from the point that Jason Pominville recognized the Stars were out of position so he turned on the jets to create a 2-on-1 with Zach Parise as he gained a little time and space and he skated into the Dallas zone where he ripped a shot over the shoulder of Kari Lehtonen.  1-0 Wild.  Minnesota followed up the goal with more solid defense and this appeared to annoy Dallas who give the Wild a power play late in the period as their chief pest Antoine Roussel gave a vicious slash to Ryan Suter.  Not a bad road period with the Wild outshooting Dallas 14-8.

2nd Period Thoughts:  Minnesota had a good start in the 2nd as an early power play because Esa Lindell held up Granlund.  The Wild would dissect the Dallas’ penalty kill unit as Granlund skated it in and then found Niederreiter for a quick pass in the slot who then swung a pass to Koivu for a one-timer that he blew by Lehtonen.  2-0 Wild.  Unfortunately this is when the wheels would fall off.  It started off slow as Ryan Suter would turn over a puck in the offensive zone that turned into a 2-on-1 between Roussel and Tyer Seguin and Roussel drew Dubnyk’s attention just enough as he made a perfect set up to Seguin for a one-timer that beat the Wild goalie cutting Minnesota’s lead in half, 2-1.  It was from here that the Stars would come to life and the Wild found itself under siege.  Dubnyk would bail his team out a few seconds later as he stoned Patrick Eaves on a back door play after a great cross-ice pass by Jamie Benn.  The Wild would have some opportunities to extend the lead back to two; the best coming on a power play when Roussel was tagged for cross checking.  Unfortunately the Wild tried to be too fancy with the puck and they were not able to register a single shot on goal with the man advantage.  The Stars seemed to know the officials were done giving Minnesota any favors and would start to take liberties.  Roussel who had been relishing his agitator role would get into it with Jason Zucker which ended in the Frenchman grabbing Zucker’s stick and throwing into the corner nearly hitting NHL referee Brian Pochmara in the process who just watched it and did nothing at all.  The Wild would get into penalty trouble themselves as Jared Spurgeon was called for interference and moments into the Stars power play, Minnesota would add another penalty as Staal was called for tripping.  This gave Dallas a long 5-on-3 and they would cash in as Jamie Benn sent a shot on goal that deflected off the stick of Scandella and out front to Eaves who batted it by Dubnyk tying the game at 2-2.  It was a painful late-period goal as the Wild watched another 2-goal lead disappear for a 7th straight game in a row.

3rd Period Thoughts:  A friend of mine posted on Twitter a picture of a person who had swallowed their whistle which certainly seemed to be the case in the 3rd period as the officials let the game get out of control.  Both clubs were guilty of penalties but the level of the violations was ridiculous as Stars players were literally tackling Wild players to no call whatsoever.  It came with a level of sarcasm that Spezza would be called for tripping late in the 3rd period.  Both clubs were sitting back and defending as they wanted to make sure they at least got their mercy point and predictably the game would go to overtime.

Overtime Thoughts:  It had chances and drama galore which is certainly what the NHL had in mind when it first put in 3-on-3 a few seasons ago.  The Wild tried to out wait the Stars to take their chances but all too often at the crucial moment something would go awry and Minnesota found itself scrambling to retreat.  Perfect case in point, Charlie Coyle made his Jimmy Dowd-like circle, hoping to get a step on the defender only to lose an edge which gave the Stars a 3-on-0 but Cody Eakin‘s shot would miss high and wide.  Minnesota would survive to send the game to a shootout.

Shootout Summary:  The Stars opted to shoot first and they’d send out Patrick Eaves.  The former Boston College star would move in and beat Dubnyk top shelf, glove side with a quick snap shot, 1-0 Dallas.  Minnesota’s next shooter was Jason Pominville who took a serpentine approach before beating Lehtonen with a wicked wrister of his own tying it at one.  Dallas’ next shooter was Tyler Seguin who would race in and try to beat Dubnyk with a wrister but the Wild goalie would have none of it.  Minnesota’s next shooter was Zach Parise who tried to take Pominville’s same approach and Lehtonen was there to thwart his attempt.  The Stars 3rd shooter was Patrick Sharp who would try to make a small move and score 5-hole but Dubnyk stopped him.  Minnesota’s next shooter was Jason Zucker who raced down the middle of the ice looking to go forehand to backhand but Lehtonen would pounce on the attempt.  Dallas’ next shooter was Jamie Benn who took a wide left and he’d beat Dubnyk 5-hole with a silky move.  This meant Mikko Koivu had to score to keep Minnesota alive and the Wild captain wouldn’t let his team down as he took a unique backhand approach before beating Lehtonen with a forehand chance.  Dallas’ next shooter was Jason Spezza who failed to lift the puck and was stopped easily by Dubnyk.  This put the game in the hands of Chris Stewart and he would find the back of the net on a sneaky backhand shot that just snuck underneath the stick side arm of Lehtonen to give Minnesota a huge 3-2 shootout victory.

Devan Dubnyk had 35 saves in the victory and he looked calm and collected in a way we haven’t seen in the last few games.  He was making stops with some traffic and blocking aside pucks to the less dangerous areas of the ice to deprive Dallas from getting any rebound opportunities.  Defensively I thought Jared Spurgeon and Marco Scandella were terrific.  Mathew Dumba had a rough night and seemed to be fighting the puck most of the game.  The penalty kill was pretty good, only giving up a 5-on-3 goal to Dallas.

Offensively Jason Pominville seems to be exhibiting more and more confidence which is important as guys like Charlie Coyle and a few other veterans have gone quiet scoring-wise.  The Wild power play cashed in once tonight and it was good to see them moving the puck with that kind of precision and purpose but then it got too fancy and seemed to work for some pretty goal.  The power play is at its best when it keeps it simple and makes quick passes and takes one-timers.

The win gives the Wild a nice 2-point cushion as Chicago lost to the Lightning.  The fact its another road win is another major reason the Wild have managed to claw their way to the top of the Western Conference.  (knock on wood)  Minnesota didn’t let this game become a track meet and the club showed some good composure to pull out another big win.  Now the Wild return home for a game against the Blues before the All Star break.

~ Attendance was 17,877 at American Airlines Arena.

G – Ales Stezka (Chicago, USHL) ~ the big Czech-born goaltender had a solid night on Sunday, stopping 25 shots as he helped the Steel earn a 2-1 win over the Sioux City Musketeers.  Stezka has a 13-6-3 record, a 2.37 goals against average and an .913% save percentage with 3 shutouts in 21 starts this season.

LW – Kirill Kaprizov (Salavat Yulaev Ufa, KHL) ~ the Russian sniper has joined some notable company on Monday when he scored twice in Salvat Yulaev’s 4-3 shootout loss to Vityaz Podolsk.  The two goals have tied him for the all-time scoring record (held by current Washington Capitals’ Evgeni Kuznetsov) by a 19-year old playing in the KHL with 40 points.  Kaprizov has 19 goals, 21 assists, 64 PIM’s and is a +10 in 42 games. 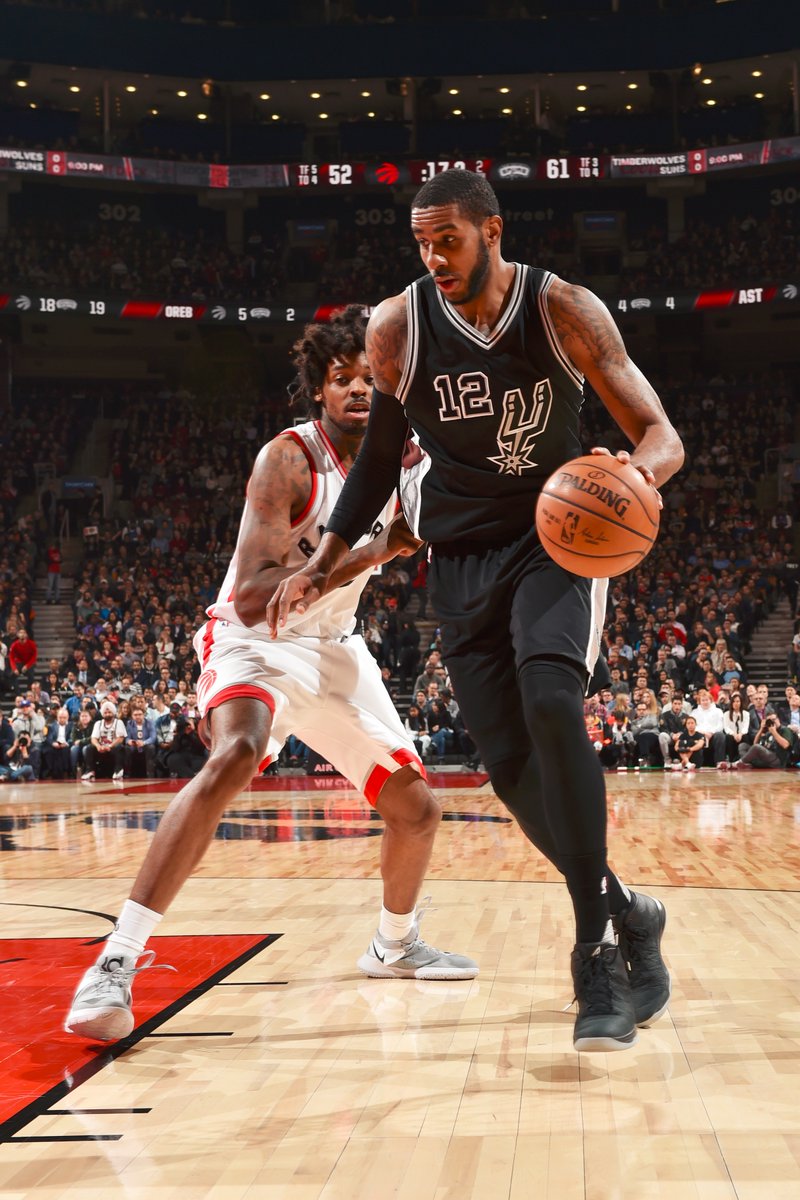 Highlights: https://www.youtube.com/watch?v=uZTZnzdc_yo The San Antonio Spurs were without four main players against a high scoring Toronto Raptors team. The Silver and Black were not suppose...