What We Learned: dumping on the Sens will piss fans off

Leave it to Ryan Lambert to generate some buzz on the interwebs.

On Friday afternoon the Puck Daddy contributor did what he does best: he raised some important points about hockey a team while concurrently antagonizing a significant chunk of that particular hockey team’s fan base.

Aggrieved fans dismiss his message outright, but not before circulating the story’s link via social media.

Fans of unaffected clubs sit back and appreciate the analysis while enjoying the overwhelming sense of satisfaction that comes from watching fans of one of the other 29 NHL franchises collectively lose their shit.

Either way, the article did its best Mike Sillinger impression and made its way around.

On Friday afternoon, it just happened to be the Ottawa Senators’ turn to fall into Lambert’s crosshairs.

Under the headline ‘Senators in awkward, unenviable NHL position’, Lambert labelled the Senators as average.  He not only took a dump on the Senators’ underlying numbers, but he blamed the mediocre state of the Atlantic for contributing to the Senators’ second-place positioning in their Division’s standings.

It’s not the first time that Lambert has cautioned against these kinds of situations before. The 2011-12 Minnesota Wild, the 2012-13 Toronto Maple Leafs and the 2013-14 Colorado Avalanche all serve as cautionary reminders about teams whose success wasn’t sustainable over longer periods of time.

Sometimes Ottawa has a tendency to put the ‘Sens’ in sensitive, so the outcry online was predictable.

Some were disappointed that Lambert failed to acknowledge that the Senators have lost Craig Anderson, their number one goaltender, for a large chunk of the season; believing that the team’s success could be even greater had Mike Condon not positioned himself to set a franchise record for consecutive appearances by a goaltender.

Others dismissed Lambert’s take outright because he’s an outsider who doesn’t have the opportunity to watch the Senators regularly or at the very least, watch their recent string of games in which they beat successful non-Atlantic teams like Washington, Pittsburgh and Columbus.

It’s a results-based league and for it, many don’t care about goal differentials so long as they believe that Guy Boucher’s structure and the defensive system he’s put in place are working.

All that matters is that the team has scored 51.02-percent of the goals since January 1st while players like McDavid, Crosby and Ovechkin have been held pointless during this stretch.

“They’re playing better hockey,” is the common refrain, but a quick glimpse of the underlying numbers (via Corsica.Hockey’s custom team query tool) and notice that Ottawa’s still on the wrong side of 50-percent when it comes to shots, shots on goal and expected goals while the team’s scoring chance data sits on the precipice at an even 50.0-percent.

The good news is that contrasted with last season, the Senators appear to be doing a better job of keeping the opposition’s shots to the perimeter. Despite the improvement here, I’m still wary of believing that the Senators can continue to: 1) generate and score on a high percentage of their chances when they continually throw fewer pucks on goal than the opposition; and 2) continue to suppress the opposition’s scoring chances so efficiently when they’re in the middle of the pack when it comes to shots allowed per game or 5v5 shots per 60. (As an aside, by 5v5 Corsi events allowed per 60, Ottawa looks even worse. Their 47.72 CA60 rating falls in line with their season average of 47.90. Both rates rank in the league’s bottom-five.)

It’s like the Senators have gone from a team that is content to trade chances with the opposition to one that is seemingly keeping the opposition to the outside while falling into the trap of seeing its own offence deteriorate.

Others wondered why the second seed in the Atlantic Division would not be an enviable place for Pierre Dorion’s team to be.

Many Sens fans were baited into believing the idea that they should be upset with the fact that the Senators are on the right side of the playoff bubble or that fans shouldn’t enjoy goals or wins because the team’s underlying numbers aren’t great.

The team has had a difficult time shedding their playoff contender label in recent seasons, but as a recurring bubble team, you can’t blame fans for preferring to see their team on the inside rather than finish just outside the playoffs and throw all hopes into the ridiculously long draft lottery odds given to non-playoff teams.

Lambert’s digs and details overshadowed the crux of his message: that a convergence of factors have contributed to put the Senators in a position wherein management and/or ownership could be lulled into a false belief that this team is as good as its record and as a result, the organization could jeopardize a future (and probably better) version of itself by making an ill-advised trade now.

Within that context, the article isn’t really too different from what’s been written of this team (here or here) before.

If there’s any reason for criticism, it’s that the article was essentially inspired based on a hypothetical (and incredibly unlikely) trade scenario where the Senators make a play for one of the Colorado Avalanche’s best players.

Alluding to two separate articles written by ESPN’s Scott Burnside (here) and Postmedia’s Ken Warren (here) that championed the idea of pursuing Matt Duchene and Gabriel Landeskog, used an unfounded suggestion as an opportunity to shit on the Senators’ situation.

There’s no evidence to suggest that the Senators are able to make the move considering finances involved, the considerable opportunity cost it would require and the fact that the holes on this roster should reasonably preclude it from meriting serious consideration as a team that could win the Eastern Conference.

That said, with Eugene Melnyk’s playoff mandate coupled with insurance picking up the bulk of the money owed to Clarke MacArthur, maybe there is cash available or there’s a chance that ownership agrees to take on more salary in hopes that the additional cost can be recouped through a longer playoff run and its accompanying gate revenues, but that idea doesn’t really jive with the way the organization has operated under dollar-in/dollar-out operation principles of recent seasons.

Even if you buy into Warren’s argument that Ottawa has to go all-in now because Erik Karlsson’s contract is running out, it seems like the kind of thing you’d want to have a firmer grasp of before making franchise altering decisions like this. The organization doesn’t have to put a self-imposed timeline on this out of fear or before the team’s well-suited to make these kinds of transactions.

Granted, the team has erred in the past and has emphasized a short-term competitiveness and acquired expensive names like Bobby Ryan or Dion Phaneuf before, but considering the circumstances and recent historical evidence, it seems more likely that the Senators would be more inclined to move lower quality assets to upgrade the bottom of its roster.

And hell, with the way that Guy Boucher has stapled Chris Neil and Mark Borowiecki to the bench recently, maybe there’s a greater chance that these upgrades will come from within — like Curtis Lazar keeping Colin White’s seat warm.

Kudos to those of you who are not related to Marc Hagel and have some idea of who he is as a hockey player.

As Michael Russo indicated, the 28-year old journeyman forward was acquired this afternoon for future considerations by the Senators this afternoon. It could be cash or maybe even a future draft pick, but with the way that Russo spoke to Minnesota’s contract situation, maybe they just gave Hagel away to Ottawa to get further away from their 50-contract limit.

Having just dealt two forwards – Buddy Robinson and Zack Stortini – to the San Jose Sharks as part of the Tommy Wingels trade, Hagel is a warm body with AHL experience that the Binghamton Senators can throw into the lineup.

Binghamton’s head coach Kurt Kleinendorst has experience with Hagel from their time together with the Iowa Wild, but aside from that, there’s nothing really to get excited over here. If there was any concern, it’d be that the Senators would be approaching the league’s 50-contract limit, but as CapFriendly.com indicates, the Senators have 44 contracts now and still have some flexibility there.

Freelance writer for The Athletic Ottawa

View all posts by Nichols
Read next 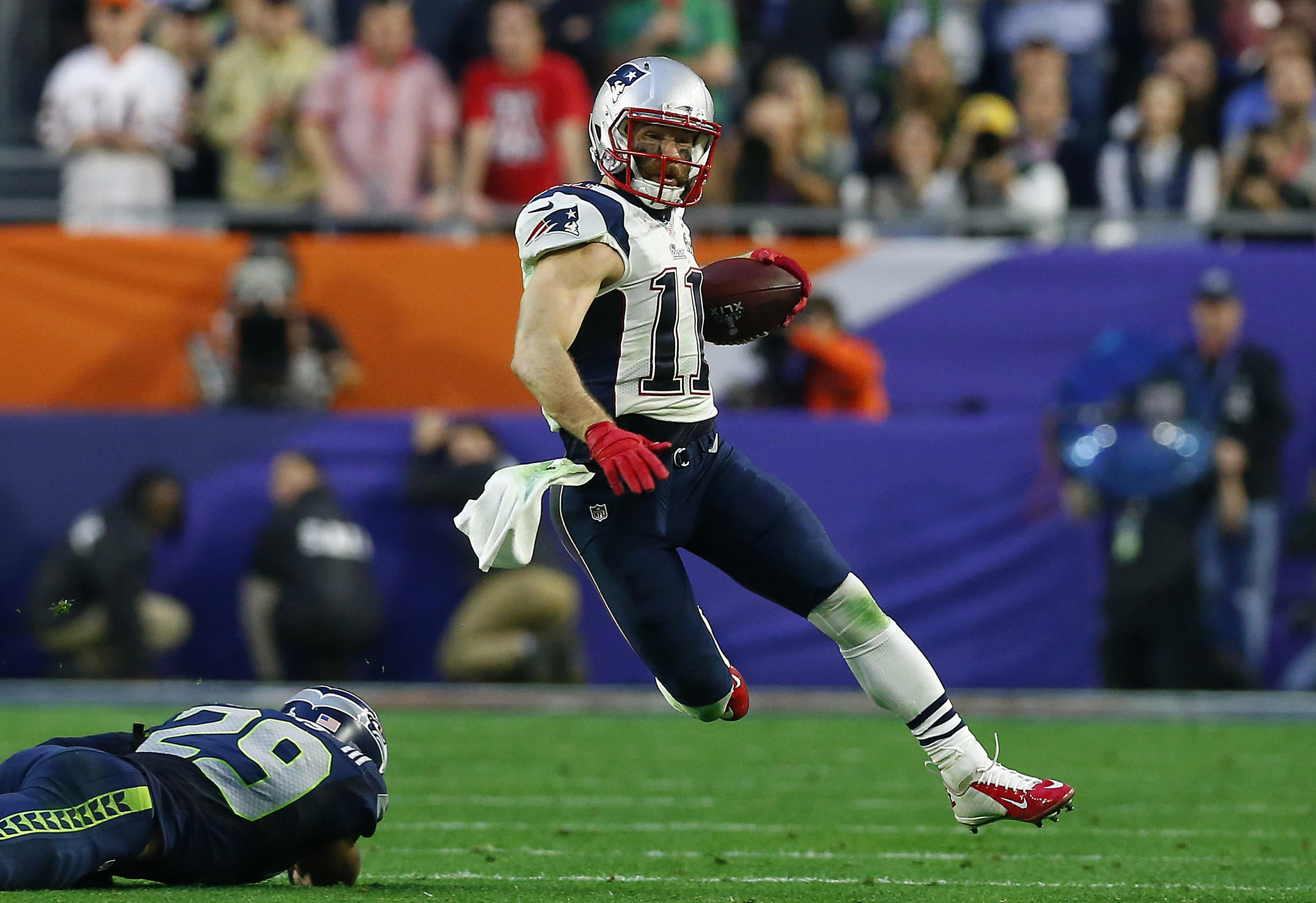 The Patriots will defeat the Falcons in a dramatic Super Bowl LI, according to the Madden video game simulation via NFL.com. In this make-believe Super...